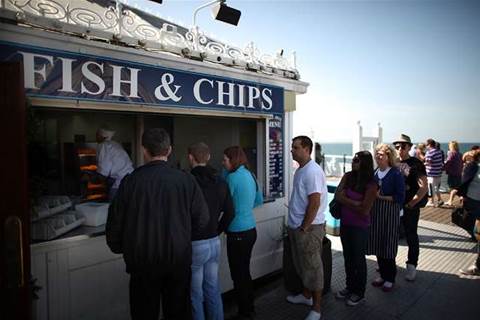 This story should be a wake-up call to any business who thinks they're too tiny for hackers to bother.

Forensic investigations carried out on 60 Australian companies during 2011 by Trustwave's research division, SpiderLabs, found the retail sector had become the biggest single target of attackers in the region, with stores making up 82 percent of all those compromised.

Of those, rural stores were the biggest targets, due largely to vulnerabilities found and manipulated in the remote access software generally tied to point-of-sale systems.

Bown said attackers searched randomly for potential targets state by state, using IP address and search engine scans to discover vulnerable e-commerce and point-of-sale software.According to SpiderLabs managing consultant Marc Bown, the attacks were by no means targeted or ideological in nature. Instead, they aimed to get the most financial gain with minimal outlay.

"[Attackers are] not going to spend twice as long trying to compromise a supermarket chain when they can go and compromise 50 fish and chip shops that have much weaker levels of security and which will ultimately en masse give them the same end-goal," Bown told the AusCERT 2012 conference on the Gold Coast this week.

"They're choosing their targets not based on who they are but what they are. It's going to cost them a lot less going after the weaker targets than to spend all of their effort going after a single, high security target... they can leave it running for six months and find new victims."

According to Trustwave's survey of compromised stores, most had less than 50 employees, processed fewer than 5000 transactions per year and largely relied on off-the-shelf e-commerce shopping carts or a managed, PC-based point-of-service platform.

"Of course, they all had an IT guy who said everything was ok," Bown said.

For e-commerce shops, often run as a largely non-profitable side business for some rural stores, attackers could use file upload or remote file inclusion features built into off-the-shelf shopping carts to inject and manipulate an exploit onto that site.

"Smaller merchants tend to be inadvertently or in some cases deliberately storing the details of every transaction that they've ever processed," Bown said.

"All the attacker does is get in there, get a copy of the process and they're gone."

Other attackers instituted a man-in-the-middle attack to direct online shoppers to a phishing site, or used keyloggers where possible.

In these cases, Bown said most e-commerce merchants preferred to turn off their sites rather than investigate the cause of the issue.

Bown said point-of-sale vulnerabilities were the largest single attack vector for rural retail stores, although SpiderLabs had not picked up on the issue in earlier surveys.

"Last year was the first year that we started to see software point-of-sale attacks begin in our region," Bown said.

Due to their remote locations, the point-of-sale systems used in many rural stores relied on a third party to manage and update the systems, often via remote access.

A successfully targeted vulnerability in the system allowed attackers to implement an exploit and log credit card PIN card data during transactions.

Though modern card readers remove this vulnerability, the remoteness and lack of technical knowledge at many of the rural stores increases the associated risk.

The situation is made worse by the fact that many of the third party managed service providers involved used a single, standard password for all clients.

"Every single one of these attacks happened by remote access," he said.

"[Rural stores] are often the most surprised when we first speak to them - they think of this as a physical thing - 'all of the bad guys are in the city, why are they out here getting me?'"

"There wasn't a widespread knowledge of the problem and that's where I guess compulsory disclosure can help to spread information about the problem so it's not such a surprise," he said.

None of those attacked and surveyed by SpiderLabs reported the breaches to the Australian Privacy Commissioner, though some cooperated with police investigations into the matter.

Should the Government pass mandatory disclosure laws, Bown said most businesses would likely take a risk-based approach to following such rules.

"These guys are caught up just trying to keep their business afloat on a day-to-day business. Any extra work they have to do that's not selling stuff is not a priority for them," he said.