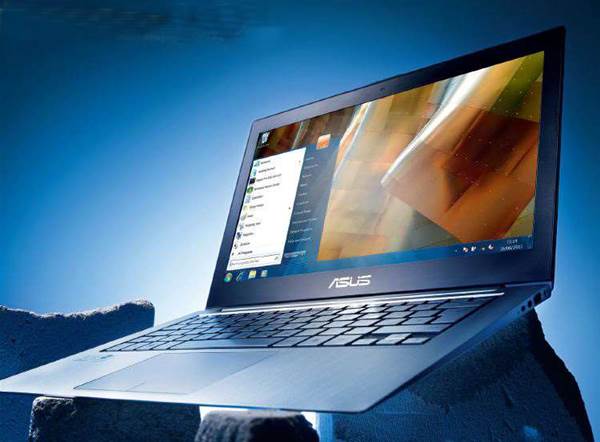 As the first 11.6in Ultrabook to hit the shelves, Asus’ Zenbook UX21 is deliciously petite.

It’s just as attractive as its larger sibling, with its all-metal construction tapering from 11mm at the front to 20mm at the rear, and the same swirl of dark-grey metal spinning across its lid. Asus’ shrinking ray has dropped the weight down to a barely-there 1.15kg; in tandem with the smaller chassis, it makes for a more endearingly portable companion.

Build quality hasn’t suffered in the slightest either. Heaving at the base and lid reveals barely any flex at all, and compared to the rest of the current crop of Ultrabooks, nothing else comes close. In fact, only one other laptop matches it for build, and it has an Apple badge on it.

The Bang & Olufsen ICEpower logo hints at another talent: the sounds that emanate from the UX21’s slender frame are surprisingly solid. The tiny speaker drivers have their limitations – they don’t go particularly loud, for one – but there’s enough clarity and body to the presentation to make music and movie soundtracks entirely listenable.

The smaller chassis does bring with it certain compromises. The first is the mid-range Core i5 processor, the same model as found in the Lenovo IdeaPad U300s. It’s still no slouch, though, and a result of 0.55 in our Real World Benchmarks keeps it competitive. Battery life suffers, though, with the Zenbook lasting 6hrs 37mins in our light-use test.

In everyday use, performance is a non-issue. The 4GB of memory and 128GB SSD keep the system punching well above its weight, and the speed of that SSD allows the system to boot from cold with unnerving haste.

The 11.6in display sports a 1366 x 768 resolution, a comfortable compromise between legibility and desktop size on a screen this small. The glossy panel is eye-searingly bright – we measured it at 547cd/ m2 – but closer inspection reveals average image quality. Colour accuracy is unimpressive, with the panel’s high colour temperature leaving images dogged with a bluish tint, and the contrast ratio of 204:1 is poor.

It might be tiny, but a comfy keyboard andtouchpad take centre stage.

After the disappointing screen, the Asus’ keyboard and touchpad are more refined. The small Scrabble-tile keys remain usable thanks to the wide channels running in between, and the firm, crisp feedback leaves no doubt as to whether you’ve successfully pressed a key. Backlighting would have been a nice touch, though.

The touchpad wasn’t initially impressive; we found it all too easy for a stray finger to snatch the cursor and fling it across the screen. Thankfully, a driver update improved matters. We still saw the cursor ping away on occasion, but the multitouch pinching and scrolling motions became far more reliable. The four-fingered upward swipe worked well, too, allowing us to bring up Flip 3D and switch between applications by brushing left and right.

For all its faults, it isn’t hard to appreciate the UX21. The mediocre display disappoints, and its chunky bezel looks even worse when compared with what Dell has done with the XPS 13, but for a first effort this shows potential. Pretty, portable and powerful, it’s as fine an Ultrabook as you’ll find for the money.