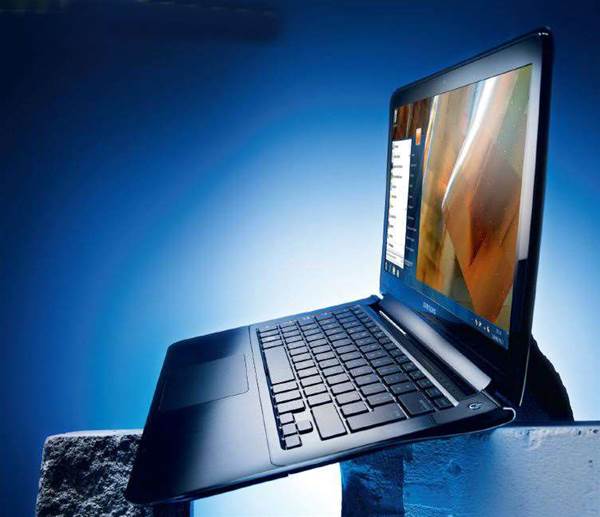 Samsung’s Series 9 900X3A arguably started it all. Before the Ultrabook was even a twinkle in Intel’s eye, Samsung’s ultraportable blended picture-perfect design with serious performance, in one of the thinnest Windows laptops ever seen.

Almost 11 months have passed since the Series 9 was unveiled, but it hasn’t been outclassed. Seemingly folded from two thinly-pressed sheets of metal, which snake and curve along the chassis’ edges, stopping only to fold back at the hinge, the Samsung cuts a striking figure. Brushed metal splashes across the wristrest, the backlit keyboard gleaming above.

It’s reasonably light by today’s standards – at 1.32kg, the Samsung puts itself squarely in the middle of this month’s group – but it doesn’t quite scale the heights of the invulnerability of some of its peers. Tugging forcefully at the base and lid reveals a more pliant chassis than the rigid Zenbooks.

With a sliver of metal snaking around its chassis, the Series 9 has a unique style.
Newsletter Signup

It’s a minor quibble, though, and one that’s soon forgotten once you start tapping away at the excellent keyboard. Each key gives way with a crisp, positive action, the very slight bounce at the bottom of the stroke adding a comfy feel to proceedings.

The multitouch touchpad isn’t quite as refined. The whole surface acts as one giant mouse button, giving way with a soft click. Four-fingered upward swipes activate Windows’ Flip 3D feature, but, as ever, the touch features feel tacked on. It’s still quicker to use the usual Windows-Tab key combination to hop between applications, and the touchpad, like most of its ilk, does occasionally ignore gestures.

After a modest tweak to the Series 9’s specifications in late 2011, the Samsung has emerged with a Core i5 processor, 4GB of RAM and a 128GB SSD – a combination that scored 0.46 in our benchmarks. This is behind the best, but the SSD hides the processor’s limitations: with sequential read and write speeds of more than 200MB/sec, applications load in a blink of the eye.

Not content only with being pretty, the Samsung’s keyboard is excellent.

The Samsung’s matte display is eye-wateringly bright, and the contrast ratio of 680:1 leaves its rivals in the shade. Despite these great figures, however, there’s a tendency for images to look washed out and unnatural, with darker scenes looking overexposed. There’s definitely a good-quality panel here, but it needs calibration if it’s to shine.

Maintaining the Series 9’s clean lines has required Samsung to place the ports on dropdown flaps on either flank. With a single USB 3 port, USB 2, microSD, micro-HDMI and Ethernet via a proprietary adapter, the Samsung has just enough connectivity to keep us happy. The presence of dual-band 802.11n is welcome, as is Bluetooth 3.

Ultimately, the Samsung’s appeal is crushed by its relatively short battery life. With only 5hrs 41mins in our light-use battery test, the Series 9 lags far behind the best.

Despite being the oldest laptop design on test, the Series 9 900X3A gets many things right. But, ultimately, all the excellent features come at too high a price, with even the cheaper models outshone by the competition. It is by far the most expensive laptop on test and there’s simply no excuse for second best.