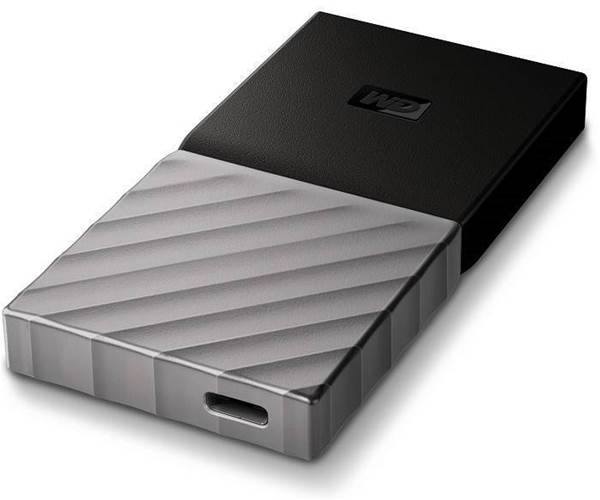 Need something faster than a regular portable drive? Western Digital's latest device might be what you need.

Since Western Digital took control of Sandisk in 2014, there has been a constant blurring of the lines between the WD brand, which has traditionally offered mechanical hard disk drives, and Sandisk which was always the king of flash.

Now WD is offering a median between its traditional HDD-based portable drive and a memory stick, which it is, thus far, leaving to Sandisk. The WD My Passport SSD is, as the name suggests, a portable USB storage device with a solid state drive instead of the usual 2.5in HDD inside.

As a result, it’s smaller and squatter than a standard My Passport (around half the width and two-thirds the height), but also it significantly quicker.

In fact, the My Passport SSD is designed to be more than just a storage device. As well as offering 256-bit AES encryption, it claims to be fast enough to run virtual machines.

To do that, it needs the 10Gbits/sec interface speeds of a 'proper' USB-C port and although it's backward compatible, it's only with the right hardware that you'll really see what it can do.

The design is a mixture of gunmetal and plastic, with a rugged build quality (it's designed to be dropped from 1.98m). It doesn't have any give if squeezed, which some devices do, purely because the cases are mostly empty.

As with all WD devices, it comes with a range of proprietary software including backup, security and cloud-syncing packages; in this case, specifically for Dropbox. However, we found that the WD Discover software gave pop-ups, even if the drive wasn't plugged in, and runs on startup.

Mac users will be pleased to hear that Time Machine compatibility is an option but as always, that requires reformatting.

And so to performance, and our test machine came up short of the manufacturer's claims of 515MB/sec, which is to be expected, but what it did throw up remains impressive. Sequential Read/Write speeds of 389.6MB/sec and 384.4MB/sec respectively make for a truly impressive spec sheet.

However, although the random speeds were consistent, they were lower than we'd have liked to see from an SSD device, maxing out at 38.57MB/sec write and 24.24MBp/sec read for a Q8T8 test and for the all important Q1T1, 18.75MB/sec read and 23.98MB/sec write.

What that tells us is that the WD My Passport SSD is capable of doing almost as much with very little compute power, making its boast of running virtual machines seem very plausible.

As you’d expect, the WD My Passport SSD is more expensive than its HDD-based siblings. The 256GB model is priced at $199, the 512GB version $329 and the 1TB model $649, although we’ve seen them being discounted online, sometimes quite significantly.

Overall, WD My Passport SSD is not the fastest external storage device we've seen, but it’s more than adequate and certainly faster than a HDD device.

It’s a safe pair of hands from the coming together of two of the biggest brands in storage. It’s perhaps is not their finest hour, but the beginnings of a beautiful overlap. A great drive, but it could be even more.

Verdict
If you're looking to be bowled over by speed, there is better out there. If, on the other hand, you're looking for a compact, fast portable drive for everyday use, the WD My Passport SSD is certainly worth considering.
Overall
Specs
From $199 AUD (256GB)
(pricing info)
• www.wdc.com
256GB, 512GB or 1TB SSD; USB 3.1 port (gen 2/10Gbps/USB C); 90x45x10mm; 73g.
Copyright © ITPro, Dennis Publishing
Tags:
hardware review storage western digital
By Staff Writers
Feb 2 2018
8:07AM