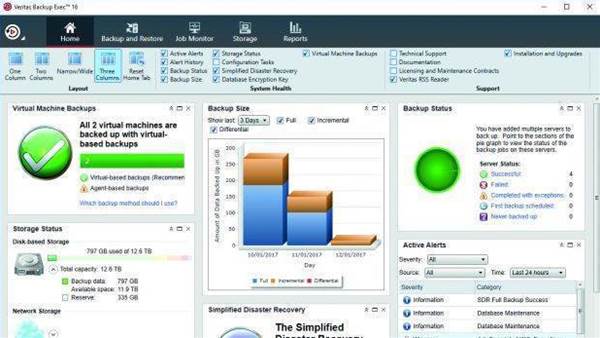 Veritas acquired Backup Exec from Symantec in 2015 – it was already a good choice for simplifying sophisticated company-wide backups, and it’s been improved since then.

Backup Exec now comes with full support for Windows Server 2016's core server operations. That's in addition to support for cloud providers including Microsoft Azure and Amazon S3, allowing businesses to easily migrate data off-site and manage it from the same console. The new Instant Granular Recovery Technology (GRT) speeds up data recovery from virtual machines too, and it's also ready to go with vSphere 2016.

Veritas now offers Backup Exec as a subscription too, which might be more appealing to smaller businesses. Rather than having to pay up-front – from around $2,500 for one front-end terabyte (FETB) for the Capacity Edition Lite – you can now pay monthly. Subscriptions cost from $55 per FETB per month (for an annual commitment), which includes backup of physical, virtual and cloud file servers to tape, disk or cloud, and data deduplication. Bumping it up to $68.33 per FETB per month adds database and application backup, and Linux support.

As advertised, Backup Exec worked fine with our Windows Server 2016 host system, and we had it loaded and ready in 30 minutes. The central console has seen a few minor cosmetic changes since the last release, and opens with a customisable dashboard offering a choice of widgets showing details such as job status, VM backups, storage usage and alerts.

We started by defining our backup storage – you can choose from disk, cloud, tape or pools. Disk-based storage options can include standard hard disks, deduplicating stores, network shares and removable devices such as RDX cartridges.

We also had no problems setting up Amazon S3 as a cloud backup destination. Choosing the network storage option, we had to provide our account ID and key, pick a bucket and decide on the number of simultaneous write operations to permit.

From the console, we then pushed agents to our Server 2016, Server 2012 R2, Hyper-V, Exchange 2013 and SQL Server 2014 systems. The latter two were running as VMs, but this was no problem: the routine pushed agents to them for us when we selected the Hyper-V host system.

Backup operations are further simplified by BE16's resource-centric model. This speeds up the creation of protection plans by reducing the number of steps required and makes it easier to include multiple backup stages using different media.

Each job starts with a full backup followed by daily incrementals, but this is easy to edit. You can change backup sources, destinations and schedules, replace incrementals with differentials and add extra migration stages such as tape or cloud storage. One caveat here is, if you want a job to use a specific disk backup device, BE16 defaults to using any available device. It's easy to change this, however. VMware fans can also have backups converted to VMs on completion.

To secure our Exchange and SQL Server VMs, we simply needed to create a job for the Hyper-V host server with these VMs selected. Here the Instant GRT feature really showed its worth: we could delve into our VM backups and swiftly pluck out individual files, folders, SQL databases, Exchange data stores and mailbox items to restore.

All recovery tasks are simple, as the job restore window only displays the relevant data for the system. The Exchange Restore wizard is a winner, providing one-click options to restore the entire database or mailbox items, along with a search facility for finding an email, contact or calendar item.

Verdict
If you're after a do-it-all business backup solution, Backup Exec is a good choice. It makes light work of managing a company-wide backup and recovery strategy, and the new subscription pricing makes it even more appealing.
Overall
Specs
From $55 AUD per month per one front-end terabyte
(pricing info)
• www.veritas.com