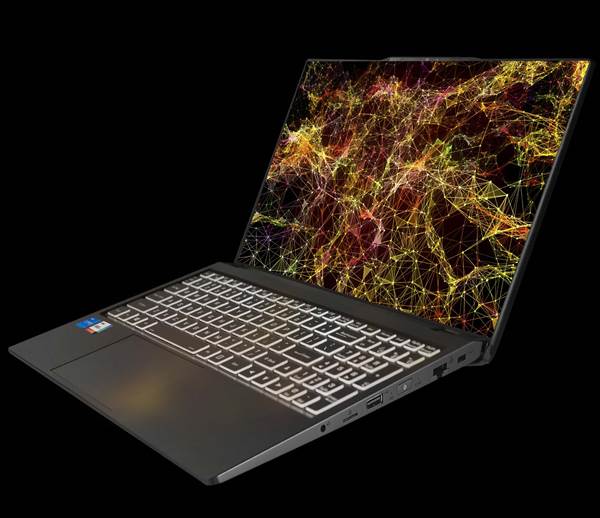 Venom laptops are based in Melbourne but sell to the world.

They’re a little different compared to other brands in that they go above and beyond in selecting components that will last for many years… and not many tech manufacturers say that. In fact, Venom is so certain that its laptops will last, they’ll give you a guaranteed $500 trade-in after seven (count’em) years! Part of the reasoning behind this is to reduce e-waste and we’ve covered this before with founder Jaan Turon’s fascinating insights into the industry (you can read about it here). But what’s the new Venom BlackBook Zero 15 Phantom like?

The Zero 15 Phantom is an ultraportable 15-inch laptop which weighs 1.7KG and is 19mm thick. The milled-aluminium chassis is very strong and the lid flexes very little. Usefully, it comes with two small power adapters so you can leave one at your desk and take the other on the road (or easily switch between home office and, er, office office). Both weigh just 350g. The screen uses Intel’s Low Powered Display Technology (LPDT) to reduce power (albeit at the expense of top-tier colour accuracy). There’s a 73Whr battery which Venom claims lasts for 17 hours. However, in our PCMark 10 Modern Office test it lasted (a still-very impressive) fourteen-and-a-half hours! 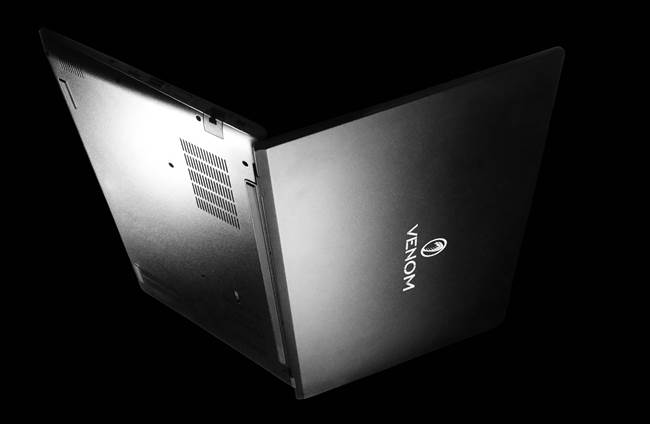 The black chassis is solid and stylish.

It’s worth stressing that this is neither a gaming laptop nor a designer-friendly Creator laptop. It’s more of a prosumer tool for 2D computing applications on the move. You can tinker with the specification to an uncommon degree: for example you can choose two, PCIe version 4, 2TB NVMe hard drives (giving 7,000Mb/s transfer speeds) and 64GB RAM. These specs alone will obliterate some bottlenecks in certain workflows.

The 2.8-4.7GHz Intel Core i7-1165G7 processor befits a beefy ultraportable. While it might not seem like a processing powerhouse it’s PCMark 10 score of 5293 is actually impressive – it’s better than scores achieved by current-gen gaming laptops which use Intel’s top 10th-generation Core i7 procesors. It’s even not far behind MSI’s flagship Tiamat Dragon laptop! However, the quad-core (Hyperthreaded) processor was never going to be great at rendering, as a low CineBench R15 score of 1043 illustrates.

Intel’s integrated Iris Xe GPU provides 3D graphical "grunt." While it’s better than nothing, you won’t be able to play much other than casual games. Note here that we found that the low-powered screen suffered badly from motion blur, so old-school competitive shooters are out too.

The ergonomics of the laptops are generally good though. The screen might not sport the most vibrant colours around but they’re fully functional for office work and casual multimedia consumption. Contrast range is good and it supports 100 per cent of the sRGB colour space.

The high-contrast, RGB-backlit, white-walled keyboard is comfortable and accurate to type upon for extended periods. It also looks cool when lit up in low light. We were pleased to see a full number pad plus full-sized arrow keys (thank goodness). The track pad is smooth and accurate and has well-weighted clicks. Above the screen is an HD webcam with infra-red sensor (and array microphones) for Windows Hello face-recognition log-on. This partners with a TPM 2.0-backed fingerprint reader in the trackpad for fingerprint-based, Windows Hello log-on.

There are dual 1-Watt speakers which are functional but don’t get very loud and have no bass.

Variants of the Venom BlackBook Zero 15 Phantom cost between $2299 (Core i5, 8GB RAM, 250GB) to $4699 (Core i7, 64GB RAM, 4TB). And of course there’s that $500 cashback waiting down the line. It’s certainly expensive compared to some other ultraportables, but its hard to see any rival not needing to be replaced (at least once) during the Zero 15 Phantom’s lifespan – two or three times. As such, it’s good value and we’re happy to recommend it to people who want uncomplicated, no-distraction, high performance laptop that will work well for a very long time.