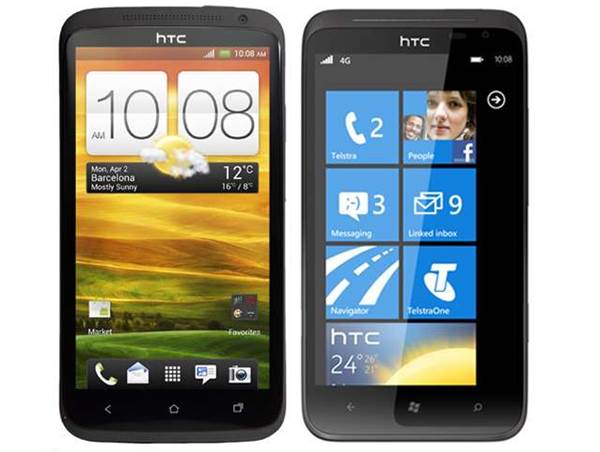 There are now four phones available on Telstra’s 4G network - three of which are HTC devices (the HTC Velocity 4G, HTC One XL and HTC Titan 4G) with Samsung making the fourth (the Samsung Galaxy S II 4G, as well as one actual 4G tablet).

The two newest members of this bunch are the HTC Titan 4G and the HTC One XL, which we’ve chosen to review side by side.  The Titan has the honor of being the first Windows Phone device on the 4G network, while the One XL is the dual-core 4G version of our currently A-Listed phone, the HTC One X.

Before we look at the phones themselves, we should discuss the 4G network. As of the end of May, Telstra had installed 1000 4G base stations across the country with work ongoing to continue building on that install base. Telstra aren’t current releasing subscriber numbers, but we can safely assume that they are on the increase.

In our testing of both of these phones around Sydney, we didn’t notice any discernible decline in speed since we tested the HTC Velocity, so either Telstra’s infrastructure is dealing with the increased customer load or the uptake has been light enough to not impact on the service. Either way, we remain extremely impressed with the 4G network performance.

For the One XL, we were seeing speeds of around 20Mbps even when only one bar was showing on 4G. It was considerably more difficult to test the Titan, sadly. The Speedtest app was not available via the marketplace, nor could we default to the Speedtest.net website, as it requires Flash which isn’t available via the Windows Phone OS.

We eventually resorted to the javascript legacy version of the Oz Broadband Speed Test. This delivered results of around 8.9Mbps, which we do not feel is the correct result - the One XL was happily showing speeds of 21Mbps at the same location at the same time. The Oz Broadband test is designed for home broadband connections, not mobile networks. Certainly in terms of real-world testing, such as file downloads and YouTube loading, the Titan felt every bit as swift as the One XL, network-wise.

Looking at the phones individually, there’s a lot more than just your choice of OS dividing them. The One XL is physically identical to the One X in terms of weight and size - even the screen and its resolution are identical (a very bright 720 x 1280). The difference lies in the CPU. While the One X ran on the quad-core Tegra 3, the One XL uses a Qualcomm Snapdragon - a dual core CPU running at 1.5 GHz. This is what allows it to have the LTE modem on board without completely killing the battery.

The results for the One XL were extremely impressive compared to its quad-core sibling. In our Quadrant test the XL was not far behind the One X. In our Sunspider test the One XL comprehensively beat the One X.

Video watching and web browsing on the XL is a fluid and impressive experience. Battery life was broadly similar to the One X - meaning there was barely anything left after our 24 hour tests - but the One X probably had the edge here, thanks to the battery sucking LTE chip the XL is packing.

The Titan 4G is a very different beast. It’s noticeably thicker than the XL at 10.9mm. It’s also significantly heavier - 160g to the XL’s 130g. The screen is 4.7in but at a rather miserly 400x800 resolution - very noticeable when viewing small text while browsing. The 1.5GHz processor is only single-core but the camera is a massive 16MP.

As Quadrant is an Android only benchmarking suite, it’s difficult to compare the two in terms of numbers. In terms of real world use, the Titan is easily one of the smoothest Windows Phone experiences we’d had. Multi-tasking was flawless and the OS animations were fluid. The Sunspider result, however, was rather disappointing. That said, using the Windows Phone benchmarking tool WP Bench, the Titan stood out ahead of the its Windows Phone brethren in terms of speed.

WP Bench has a battery life tool that stresses the CPU until the battery shuts down but we elected not to use this as we felt that the 4G nature of the device meant battery life was more likely to be limited by the LTE chip than the CPU. We subjected it to our standard phone battery life test, and with 15% battery left after 24 hours, we were pleasantly surprised by the Titan, but the 4G network still accounts for a great deal of battery draw.

The addition of HTC’s movie streaming app Watch was also unusual but not unwelcome, although the 16GB of non-expandable storage felt a little light by today’s standards.

Access to superfast mobile download speeds is the primary reason anyone would purchase a 4G phone. With so few 4G phones on the market, users are limited in their choice. That said, both of these phones are excellent devices. The HTC One XL is every bit as good in looks as the One X and nearly as good in terms of power. For an Android user looking to make the shift to LTE, this is the device to own.

The HTC Titan 4G is a little different - this is not only the first Windows Phone device on 4G, it’s also one of the best Windows Phones we’ve used. While HTC has made some odd decisions for a phone that seems a natural choice for the business market (no microSD, a non-removable battery) this is a phone we’d recommend to anyone looking for a WP7 experience, 4G aside.