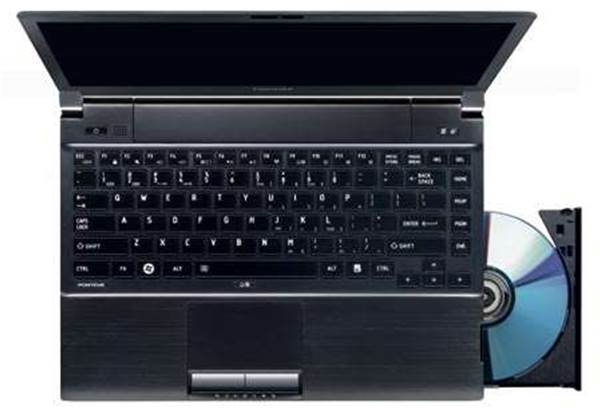 Toshiba’s little Portégé R700 is quite something: a 13.3in portable complete with optical drive that weighs in at only 1.49kg.

Yet it crams a lot into its tiny chassis. This high-end model packs a powerful 2.66GHz Core i5-560M processor and 4GB of RAM – both carried it to a score of 1.6 in our benchmarks. The integrated graphics keep it from shining in our gaming tests, though.

Also built in is a 3G modem for browsing on the move, and the battery life makes that a real strong point. In our light-use test it lasted 6hrs 58mins, longer than most laptops out there – and Toshiba’s Sleep-to-Charge function lets you borrow that power for your other USB gadgets, even when the laptop is off.

For connectivity, there’s 802.11n dual-band Wi-Fi, Bluetooth 2.1 and Gigabit Ethernet, along with three USB 2 ports, one of which doubles as an eSATA connector. A 320GB hard disk can be topped up via the SD and MMC card reader on the right flank. There’s also an ExpressCard/54 slot, and a docking connector on the underside.

I have read and accept the privacy policy and terms and conditions and by submitting my email address I agree to receive the Business IT newsletter and receive special offers on behalf of Business IT, nextmedia and its valued partners. We will not share your details with third parties.
However, there are a few compromises. The build quality feels weak around the base, particularly above the DVD drive. The 1366 x 768 screen is perfectly usable but won’t win any awards for image quality, while the keyboard drew mixed opinions in the Labs for its wide, thin profile and shallow-travel keys. The mouse buttons also feel a little cheap.

Toshiba has opted for the 32-bit version of Windows 7 Professional, so the 4GB of RAM isn’t entirely recognised. And, when the R700 is really pushed to the limit, its internal fans begin to scream in complaint as they work harder; this isn’t a quiet laptop, which is our main complaint.
It isn’t perfect, then, and will never compete with some of the other premium laptops out there on quality, but it’s cheaper, powerful and supremely portable.
Verdict
The Toshiba Portege R700 is powerful, thin and light, but as our review explains, that brings some design drawbacks
Performance
Battery Life
Features & Design
Value for Money
Overall
Specs
$2117 AUD
(pricing info)
Copyright © Alphr, Dennis Publishing
Tags:
hardware laptop mobilecomputing portege r700 toshiba
By Staff Writers
May 31 2011
2:10PM