Thunderbolt external drives: does the speed justify the price? 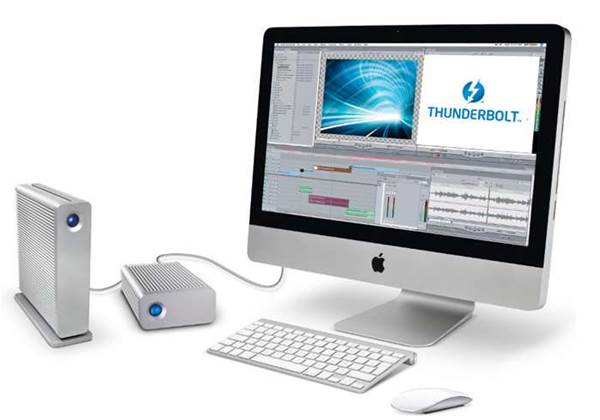 [Thunderbolt is the name used for a technology used to connect external hard drives and other devices to your computer (your computer and the device must both have Thunderbolt ports). It's expensive, but if you work professionally with very big files, it could be very useful by saving you time when transferring files from portable drives to your computer, or when backing up data to an external drive.]

Thunderbolt ports have been appearing on Apple hardware for more than a year now, and they’re slowly starting to show up on high-end Ultrabooks and motherboards too. There’s been a lot of buzz surrounding this high-speed, multipurpose interface, but as yet few consumer peripherals have made use of it. Now, however, we’re starting to see Thunderbolt emerge as a connector for external hard disks.
The appeal of Thunderbolt for connecting drives is this: it offers a huge 10Gbits/sec of bandwidth. This doesn’t mean a Thunderbolt drive will transfer data at that rate, since hard disk technology simply isn’t capable of that sort of performance. But it means there’s headroom for the disk to perform at its maximum speed, whatever that may be. This is a big advantage over older USB 2 drives, in which the 480Mbits/sec connection speed keeps transfer rates low. Even USB 3 drives, with 5Gbits/sec of bandwidth, could bottleneck today’s fastest SSDs – especially if they’re combined into a striped RAID array.
Newsletter Signup

I have read and accept the privacy policy and terms and conditions and by submitting my email address I agree to receive the Business IT newsletter and receive special offers on behalf of Business IT, nextmedia and its valued partners. We will not share your details with third parties.
Another benefit of Thunderbolt is support for daisy-chaining, allowing you to string together drives neatly, rather than each one requiring its own port on your PC. You can even attach a monitor to the chain, since Thunderbolt carries DisplayPort data alongside other protocols. Monitors consume a lot of bandwidth, though, so be warned that this may reduce the performance of other peripherals attached to the same host port.
There are downsides to Thunderbolt, however, and the first is the price. Thunderbolt is currently a small market of high-performance parts, and the prices reflect that. Even a cable will currently set you back around $50.
The second issue to be aware of is power consumption. Thunderbolt is a more electrically complex system than USB, and drives connected via Thunderbolt draw more power than USB 3 ones. In our tests, we found USB 3 disks typically added around 4W to total system load when spinning idle, while Thunderbolt disks added around 10W. If you’re powering a portable drive from a laptop, that difference could have a significant impact on battery life.
[To test our Thunderbolt drives, we used a Windows 7 test rig comprising a Gigabyte Z77X-UP5 TH motherboard, an Intel Core i3-2100 CPU and 4GB of RAM.]
1. Elgato Thunderbolt SSD 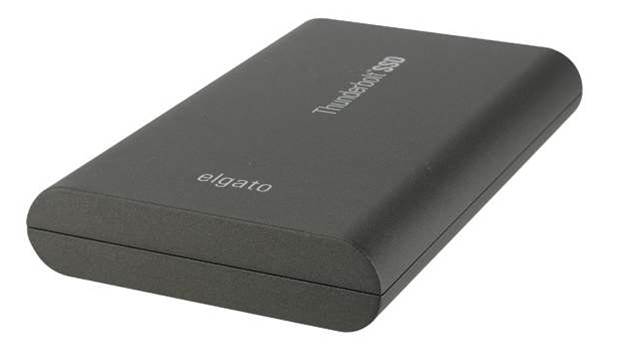 If you want to see the greatest benefit from a high-speed Thunderbolt connection, you’ll want to look at SSD-based models [SSD stands for Solid State Drive. SSD can be faster than conventional hard drives for some operations, though it depends on the type of SSD].
Elgato’s drive sets either a 120GB SSD or 240GB model in a low-profile case with a single Thunderbolt socket, promising speeds much higher than a typical mechanical drive. And so it delivered in our large-file tests, where the 120GB model achieved read and write speeds of 208MB/sec and 221MB/sec.
Performance was less exceptional in the small-file tests, where the Elgato Thunderbolt SSD achieved 30MB/sec and 66MB/sec respectively – not much better than a USB 3 mechanical disk. This is largely because Elgato has had to use a SATA 3Gbps controller in order to fit into the narrow power requirements of bus powered Thunderbolt devices.
The real question mark over the Elgato Thunderbolt SSD, however, is the price. We understand SSDs are expensive, but the Apple Store price of $349 for the 120GB model is hard to swallow – especially since it doesn’t even include a cable. The $580 240GB model is better value, but a comparatively steep 10W idle power draw is a turn-off.
2. Buffalo MiniStation Thunderbolt

Buffalo’s MiniStation Thunderbolt contains a 2.5in mechanical drive, of either 500GB or 1TB capacity. It serves as a convenient illustration of the difference between USB 3 and Thunderbolt – since it offers both interfaces, and thoughtfully comes with both cables.
We tested the 500GB model, first over USB 3. When reading and writing large 1.5GB files to and from a RAM disk, it averaged transfer speeds of 103MB/sec. In our taxing small-file test, which creates and copies 15,000 files of 100KB each, it averaged read and write speeds of 23MB/sec and 50MB/sec respectively.
We then switched to Thunderbolt and repeated the tests. In both large-file and small-file read tests, scores were effectively identical across the two interfaces: this was as we expected, since the bottleneck here is the performance capability of the drive. Using Thunderbolt did improve write speeds: large-file results gained a boost, up to 145MB/sec, and small-file results was lifted to 60MB/sec. Overall, though, performance trailed some way behind the Elgato.
Although prices for the MiniStation Thunderbolt are yet to be confirmed, a US price of $210 suggests we’ll be paying at least $250 – around three times the price of a USB-only unit. Although the performance benefit is undeniable, that makes it hard to recommend, unless perhaps you’re using a 2011 Mac that lacks USB 3.
It’s worth noting, too, that the MiniStation has only a single Thunderbolt port, limiting your ability to take advantage of Thunderbolt’s daisy-chaining capabilities. Moreover, when connected by Thunderbolt, the drive drew 8W when spinning idle, largely thanks to the extra draw needed from the active cable. This is especially noticeable when compared to a draw of only 3W when connected via USB.
3. Seagate GoFlex Thunderbolt Adaptor 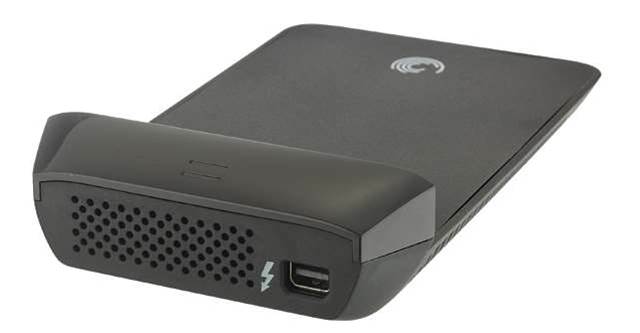 Seagate’s modular GoFlex system takes a slightly different tack to its rivals. The idea is simple: if you have an existing 2.5in Seagate GoFlex drive, you can turn it into a Thunderbolt disk by simply slotting it into the appropriate caddy. This approach makes it impossible to make promises about performance, since this will depend on which disk you use.
We installed a 1TB drive from 2011 (originally sold with a USB 3 caddy) and saw identical speeds to those delivered by the Buffalo MiniStation. In principle the Thunderbolt caddy should support much faster drives, but at present Seagate doesn’t offer any SSD-based GoFlex models.
As it stands, therefore, the GoFlex Thunderbolt Adaptor is – like Buffalo’s MiniStation – probably only worth considering if you have a Mac that supports Thunderbolt but lacks USB 3. Otherwise it makes more sense to pay  for a USB 3 cable – or not much more for an entire new drive – than to splash out $105 for this.
4. LaCie Little Big Disk Thunderbolt SSD 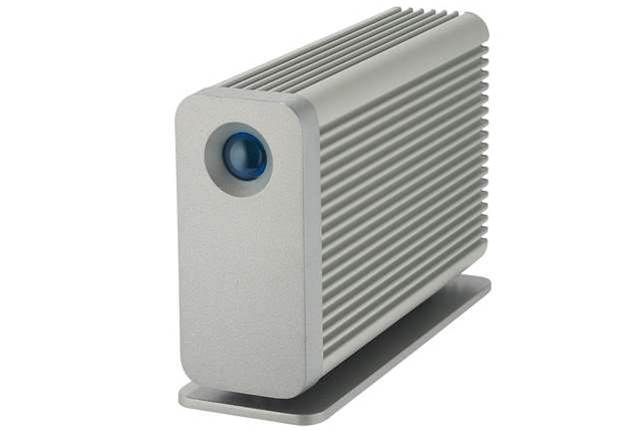 LaCie’s SSD-based Thunderbolt drive looks chunkier than most, but that’s because it contains two 120GB disks, which you may choose to use in separate, spanned, striped or mirrored configuration. Individually, these solid-state models outshone Buffalo’s mechanical drive in our tests, but couldn’t match the large-file transfer rates of Elgato’s drive.
Combine the two disks into a RAID0 array, though, and performance rockets: we saw large-file read and write speeds jump to 267MB/sec and 284MB/sec. Even small-file operations were slightly accelerated, with write speeds hitting 74MB/sec.
However, you may baulk at using RAID0 for storing important files, since it doubles the likelihood of a hardware failure leading to irrecoverable data loss. SSDs are less prone to this than mechanical drives, since they have no moving parts, but if you plan to use the Little Big Disk in this mode, you should make sure you have a good backup system in place.
At $700 for this model, LaCie’s twin-disk Thunderbolt drive isn’t a bargain, but it’s cheaper and more versatile than Elgato’s 240GB drive. It also offers a second Thunderbolt port, and a bundle of complimentary backup software. Our final caveat is that it uses an external 12V power supply, making it less suited than most to a mobile lifestyle.
Verdict

Click to enlarge
Clearly, Thunderbolt drives are fast – but they’re also expensive, and for everyday use there’s much to be said for sticking with USB 3 (especially considering that any PC with Thunderbolt is guaranteed to have multiple USB 3 ports).
For professionals, however, who are willing to pay for top-speed storage, Thunderbolt is exciting – and as the market grows, prices will surely fall. We look forward to seeing what Thunderbolt brings in the coming months and years.
Verdict
Hard disks using the superfast Thunderbolt interface are starting to appear – but do the performance benefits justify the price? Read the review of four quite different drives.
Overall
Copyright © Alphr, Dennis Publishing
Tags:
3 backup buffalo drives elgato external goflex thunderbolt hardware lacie little big disk thunderbolt seagate storage thunderbolt usb
By Darien Graham-Smith
Oct 9 2012
2:36PM