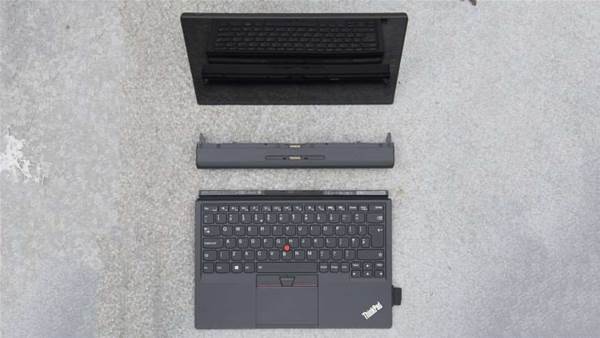 Lenovo's ThinkPad X1 Tablet has a modular design that allows you to add components like an extra battery and more ports to the device.

There’s no shortage of Surface Pro 4 alternatives, but while some are pretty good, none have really come close to threatening Microsoft's market-leading design.

The ThinkPad X1 Tablet at least offers something different: upgradability, through a series of plugin modules that add new features when you need them. The ‘Productivity Module’, for example, boosts the X1 Tablet's ten-hour battery life, and also has extra ports: one USB 3, Lenovo's proprietary OneLink+ connector and a full-sized HDMI video output, to complement the USB 3, mini-DisplayPort and USB Type-C ports around the edges of the tablet itself.

In tandem with the keyboard – which connects in a similar fashion to the Surface’s Type Cover – this turns the ThinkPad X1 Tablet into a proper portable workhorse. With the Productivity Module clipped to the bottom and the keyboard attached to its front, the tablet is heavier and thicker than the Surface Pro 4 by quite a large margin, but its stamina is more fitting for a device designed for office use. The bad news is that the Productivity Module will set you back $299. 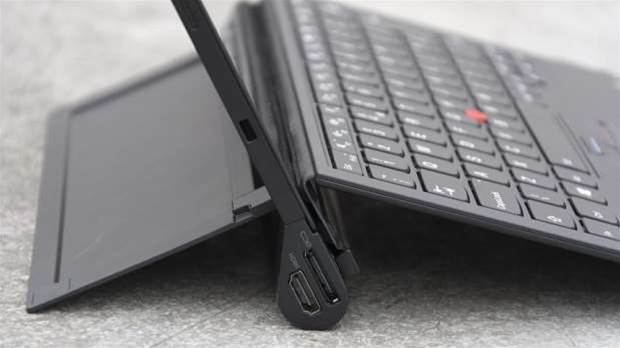 Other expansion modules are coming too. Available soon will be the Presenter Module that includes a pico projector capable of displaying 60in displays from two metres away – although with a brightness rating of just 32 lumens, the room will need to be fairly dim.

The good news is that, unlike the Surface Pro, the ThinkPad X1 Tablet includes both the keyboard and the pressure-sensitive ThinkPad Pen Pro stylus in the advertised price.

That keyboard, together with the well-designed kickstand, ensures the device is very usable, even when used on your lap like a notebook. In fact, its ‘lappability’ is unrivalled among its 2-in-1 tablet rivals – and that includes the Surface Pro 4.

Instead of the hinge point being in the centre of the tablet, creating a thin edge for it to balance on, the ThinkPad X1 Tablet's kickstand hinges out from the bottom edge. This way the kickstand's flat surface area rests on your thighs when it’s perched on your lap, making it feel more secure. It's an adjustable hinge, too, so you can tilt it back and forth to achieve the most comfortable viewing angle and, in typical ThinkPad fashion, the quality of the keyboard is excellent.

The keys have a soft, cushioned action that gives it a great touch-typing feel and there's loads of travel (1.35mm per keystroke to be precise). There's also plenty of space in between each key, so typos are kept to a minimum, and the touchpad is good, too, with a smooth top and a reliable and responsive action. Lenovo has even found room for the traditional ThinkPad red-dot trackpoint, nestled in between the keyboard's G, H and B keys. 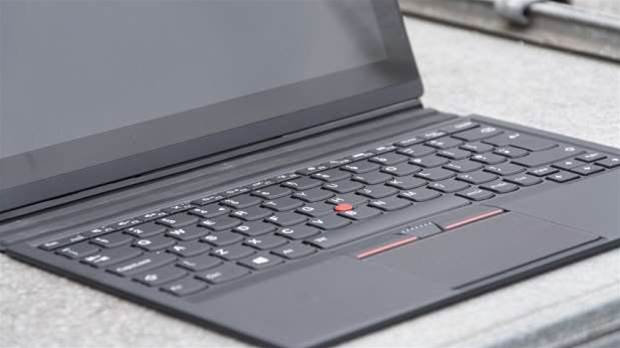 It's all very light and portable. Adding the keyboard increases the weight from 725g to 1.1kg, which is pretty good for a 12-inch 2-in-1. It's pretty slim as well, measuring 14.2mm thick with the keyboard and 8.6mm without.

We also like the inclusion of a fingerprint reader. Embedded in the front-right bezel, next to the screen, this can be used to unlock the tablet in a trice – a quick dab of your thumb is all that's required – without having to type a password.

The design isn’t perfect, however. For starters, the keys aren't backlit as they are on some its 2-in-1 rivals such as the Surface Pro 4 and the HP Elite X2. The means by which you attach the extra modules also leaves much to be desired. To add a module, you have to first remove a plastic strip that runs the length of the tablet's bottom edge.

In addition, the mechanical clips that secure the extra modules in place are tricky to engage. It took us several attempts to get the productivity module firmly seated and locked in. And to attach the keyboard with the Productivity Module in place, you have to remove yet another eminently losable plastic strip.

Having said all of this, one thing in favour of the system is that, once your modules are in place, it's impossible to dislodge them by accident, and the magnets holding the keyboard in place are equally strong and secure.

The 12-inch screen is very good, without being spectacular. It's an IPS screen with a 3:2 aspect ratio and a resolution of 2,160 x 1,440 pixels. The maximum brightness and contrast are reasonably good. Its coverage of the sRGB colour range isn't all that great, but the colour accuracy is quite impressive. Overall, however, it can't compete with the all-round excellence of the Surface Pro 4's screen. 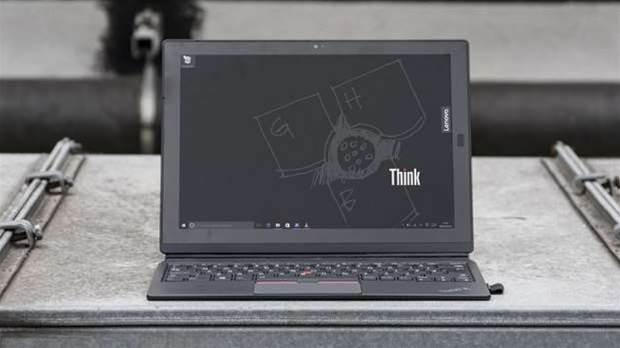 Don't expect cutting-edge performance, either, because Lenovo employs a Core m processor rather than a fully fledged Core i5 or Core i7 like the higher-end Surface Pro 4 models. In testing, we've found the Core m chips throttle back once you start pushing them (for example, when encoding video), but they're fine for general use and bursts of activity. Lenovo also offers the opportunity to eliminate another performance bottleneck with an option for a superfast Non-Volatile Memory Express (NVMe) solid state drive (SSD).

The test sample provided to us included a Core m7-6Y75, with 8GB of RAM and a 512GB NVMe SSD. It's as quick and responsive in day-to-day use as we expected it to be. In our benchmark testing, it performed pretty well overall, though a touch behind the HP Elite X2.

How then does it stack up against the Surface Pro 4 and HP Elite X2?

In some ways it surpasses both of them, especially given that neither has the facility to add components in the way the Lenovo ThinkPad X1 does, and it's a match for both in terms of its ergonomics.

On the other hand, certain parts of the design are clunky, and it’s not exactly bargain-basement. The base model, which features an Intel Core m3-6Y30 processor, 4GB of RAM and 128GB SATA3 SSD, costs $1,999. That’s not great value considering you can get the Surface Pro 4 with similar specs for $1539 (including the Type Cover).

The HP Elite X2 is similarly cheaper than the ThinkPad X1 across the range, although HP’s screen isn't as good as the Lenovo’s.

In short, then, the Lenovo ThinkPad X1 Tablet has plenty going for it, but its price is likely to put off many potential customers.