The Panasonic Toughbook: Not every laptop has to be wafer thin 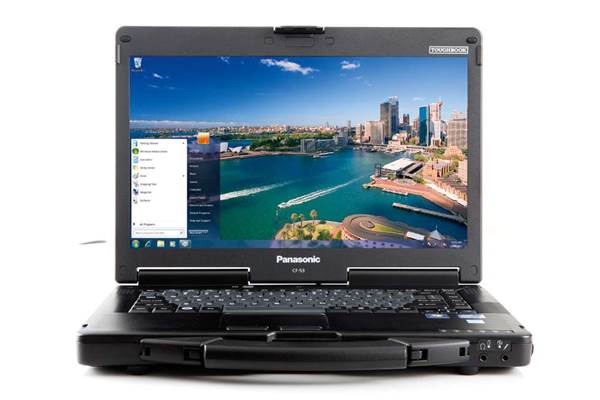 Knee deep in the midst of Ultrabook hype it is easy to forget that not every laptop needs to be wafer thin and weigh less than a bottle of water. Panasonic’s CF-53 ‘semi-ruggedised’ Toughbook is in many ways the anti-Ultrabook – it is thick and chunky, and while not heavy it doesn’t have the featherlight qualities of the latest craze.

Features & Design
But that doesn’t matter because, unlike the CF-53, we would never have an impromptu game of office soccer with an Ultrabook. The CF-53 is the latest in an esteemed line of ruggedised products from Panasonic’s Toughbook range, and it really does seem indestructible. This is down to the way in which the chassis is constructed, using Magnesium Alloy and toughened plastic to ensure that the hardware inside is protected from the rough and tumble of heavy outdoor use.
Newsletter Signup

I have read and accept the privacy policy and terms and conditions and by submitting my email address I agree to receive the Business IT newsletter and receive special offers on behalf of Business IT, nextmedia and its valued partners. We will not share your details with third parties.
Ports are all covered with plastic hatches, and in keeping with the kinds of usage models that such a ruggedised product is needed for, there is a curious mix of new and old ports. Alongside such things as a single USB 3 port, Gigabit Ethernet and HDMI sit a serial port and RJ-11 modem.  For consumers this may seem a little odd, but for those like engineers or geologists who need to interface with oftentimes archaic industrial machinery it’s a godsend.

Not a laptop for the masses: Panasonic's ToughBook
Besides the covered ports, which are probably best described as dust and water resistant, the CF-53 also has other features designed to keep it going in harsh conditions. One is the lack of cooling fans to suck dust into the laptop; instead it has clever heatpipes to dissipate the heat generated by the second generation Core i5 CPU inside. It also features special foam hard drive mounting, designed to enhance the anti-shock mechanisms already built into the drive.
The lid is held in place by a solid clip, and small lugs stop it from twisting sideways when closed. (There is very little give in the top anyway thanks to the solid hinge.) The touchpad is molded into the chassis, with discreet left and right buttons. Despite this it is still quite responsive and we had no issues using it. They keyboard is chunky and satisfying to use, and the screen is visible in even harsh sunlight.
Performance
But all this sheer ulility means very little if the system performance isn’t up to scratch. Thankfully this isn’t an issue though. Under the hood sits a V-Pro enabled Core i5-2520M running at 2.5GHz, 4GB of DDR3, 320GB HDD (with 288GB formatted space once the recovery partition is taken into account) and DVD writer. This helps the CF-53 to score an overall 0.65 in our real world benchmarks, which is faster than a Core-i7 Ultrabook and comparable to other Core i5 based systems like Dell’s XPS 14z. The integrated graphics managed an almost playable 25fps in low-detail Crysis, but if you need a system capable of decent 3D rendering performance then it isn’t quite there.
What was truly outstanding was the battery life scores that the CF53 achieved. In the heavy use test we saw it last for 1:54, which is a good half hour more than the XPS 14z, while light use was an even more impressive 7:46, a full hour and a half greater than the XPS 14z. This battery life plays well into the intended usage models of the Toughbook, which will likely be taken out on the road and away from power for extended periods.
Conclusion
Panasonic’s Toughbook CF-53 is a perfect match of form and function. Not only does it have the build quality and expansion ports needed for the rough and tumble of being used in the field, but it also has the performance and battery life to back it up. The keyboard and touchpad are a joy to use, and the screen works well in the less than ideal circumstances of bright sunlight.
The Toughbook has never been a laptop for the masses, although the pricetag isn’t as far off a similarly specced non-rugged laptop as it used to be. But if you are after something designed to take the rough and tumble of life in the bush without filling up with dust or dying the second it gets dropped then this really is the only serious option. The fact that it performs well and has fantastic battery life is really icing on the cake.
Verdict
Meet the Panasonic Toughbook CF-53AACHYDA - not a laptop for the masses.
Performance
Features & Design
Value For Money
Overall
Specs
$2200 AUD
(pricing info)
Copyright © PC & Tech Authority. All rights reserved.
Tags:
cf53aachyda hardware laptop panasonic review toughbook
By John Gillooly
Mar 1 2012
1:16PM