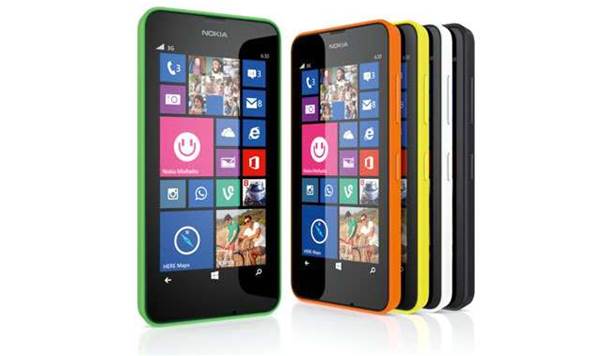 Nokia has form in producing high-quality, low-cost smartphones, and the Nokia Lumia 630 has the added bonus of being the first we’ve seen to come with Windows Phone 8.1 on board.
We were impressed with Windows 8.1 when we tried out the Developer Preview on a Lumia 1020, and it works just as well on this smaller handset. In particular, the new pull-down Action Center is a boon, with its toggles and settings menu shortcuts, while the Swype-style “shape writing” keyboard works beautifully.
Newsletter Signup

I have read and accept the privacy policy and terms and conditions and by submitting my email address I agree to receive the Business IT newsletter and receive special offers on behalf of Business IT, nextmedia and its valued partners. We will not share your details with third parties.
At first glance, the phone itself isn’t especially interesting. Like many budget smartphones, it looks and feels ordinary, with a simple, flat glass front and a removable, matte-plastic rear cover, which is available in a variety of bright colours. It doesn’t even have the iconic Windows Phone Home, Back and Search keys stencilled beneath the screen: on the 630, the buttons have been moved onto a bar at the bottom of the display itself.
In terms of build quality, it isn’t a patch on Nokia’s flagship models, but it looks reasonably smart with its angled edges and rounded corners. It’s also light, weighing only 134g, and is more pocketable than the 5in phones we’ve seen recently.
On the rear, the 630 has a 5-megapixel camera but no flash, and there’s no front-facing snapper at all. Unusually for a Nokia handset, there’s no dedicated camera shutter button; to take a photograph, you have to first unlock the phone then launch the camera app, which can take as long as ten seconds if you secure your phone with a code. Other shortcomings include a lack of 4G (the Lumia 635 has 4G but is more expensive), no dual-band Wi-Fi support, and no NFC. On the plus side, the phone’s 1,830mAh battery is replaceable, there’s 8GB of internal storage – generous for a budget phone – and you also get a microSDXC slot, which accepts cards up to 128GB.
The 630’s 4.5in display is an IPS panel, and measured with our colorimeter it reached a reasonably bright 323cd/m2 at maximum brightness, while the contrast ratio of 788:1 prevents onscreen images looking washed out. It’s tough, too: the layer of Gorilla Glass 3 should shrug off scratches.
Take it outside, however, and it quickly becomes clear that this is a second-class screen. The first problem is that it picks up fingerprints far too easily, and the greasy smears create a glare that makes it difficult to read the screen in bright conditions.
Dim the display and another problem rears its head: the top edge of the screen is terribly patchy, which can be distracting when using the phone in dark conditions. Also, there’s a lot of smear and motion blur evident when you scroll around quickly.
The resolution of 480 x 854 is the least of the Lumia 630’s worries, but graphics and text do look noticeably more coarse than on a 720p display of the same size.
Qualcomm’s 1.2GHz quad-core Snapdragon 400 system on a chip (SoC) is a common sight at this price level, and as usual its performance fails to set the pulse racing. The 630 achieved an uninspiring time of 1,529ms in SunSpider, which is well below average for a modern smartphone.
The Snapdragon 400 had enough juice to run Windows Phone 8.1 smoothly, though, with only the occasional hitch – usually evident during app installation. And you won’t find many games that will overtax the 630’s Adreno 305 GPU, since the screen resolution is so low.
The battery life is fine, too. In general use, we found the Lumia 630 would get us through a day with capacity to spare. In our tests, with the screen set to medium brightness, our video consumed 10.4% per hour, and audio streaming over 3G at up to 5.2% per hour. This puts it on level pegging with the Motorola Moto E and ahead of the Moto G.
The 630’s 5-megapixel camera is merely average – it doesn’t have a high resolution, and the 1/4in sensor is on the small side – but in good light conditions images are clean and exhibit more natural colours than most budget rivals. It’s much the same story when it comes to video. In good light, the 630’s 720p footage is lacking in detail, and there’s no stabilisation to sort out shaky hands, but colours are well balanced and there’s none of the horrible exposure stepping we saw with the Moto E. Footage is noisy in low light, but not unusably smeary or juddery.
All-round call quality is superb. Both the earpiece speaker and mic produce clear audio, and the rear-firing, single external speaker can reach surprisingly high volumes, although it does have a harsh, nasal quality to it.
The Nokia Lumia 630 is a pretty good smartphone. There’s ample performance, battery life is good, and the camera is tolerable. All the same, the patchy, dim, low-resolution screen disappoints, and is reason enough to consider the 630’s budget rivals first.
Verdict
The Nokia Lumia 630 is a perfectly passable budget handset, but a poor display robs it of greatness. Read the review.
Performance
Features & Design
Value for Money
Overall
Specs
$200 AUD
(pricing info)
Copyright © PC Pro, Dennis Publishing
Copyright © PC Authority, nextmedia
Tags:
630 hardware lumia nokia review
By Jonathan Bray
Sep 26 2014
4:35PM