The Nexus 5 reviewed: a superb smartphone 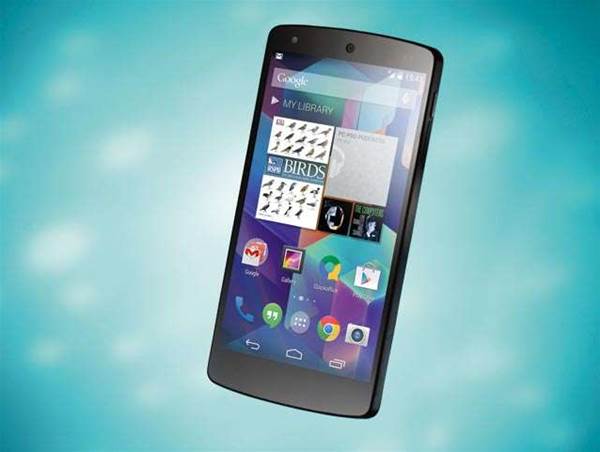 If the Nexus 4 was a breakthrough for Google’s smartphone brand, the Nexus 5 could be the model that sees it stride ahead of the rest of the market.
Why? Because it takes a successful formula and adds improvements all round, yet retains the main draw of the original – a very reasonable price. The 16GB Nexus 5 costs only $399, undercutting the outright price of all its near rivals – the Samsung Galaxy S4, the HTC One, the iPhone 5s and the iPhone 5c.
Newsletter Signup

I have read and accept the privacy policy and terms and conditions and by submitting my email address I agree to receive the Business IT newsletter and receive special offers on behalf of Business IT, nextmedia and its valued partners. We will not share your details with third parties.
However, there’s nothing cut-price about this unit. The Nexus 5 isn’t as glamorous as its predecessor, but it can certainly hold its head up. In fact, its design is similar to the recent Nexus 7 tablet, with a matte-black, soft-touch plastic rear, the Nexus branding emblazoned upon it in large letters, and a camera lens housing that slightly protrudes.
It doesn’t have the premium feel of the HTC One or the iPhone 5s – and it isn’t the slimmest around, at 8.9mm – but there’s nothing cheap about this phone. The Gorilla Glass 3 on the front means it should resist scratches and drops better than most, too.
Display
The Nexus 5 has a 4.95in IPS display with a resolution of 1080 x 1920 and a pixel density of 445ppi. Yet, despite the large screen, LG – the device’s manufacturer – has managed to limit the size of the phone so it doesn’t feel bulky in the hand.
Screen quality is excellent. It isn’t as richly saturated as the Super AMOLED panel on the Galaxy S4, but its top brightness of 508cd/m2 is far better, which leads to better readability in bright sunlight. The 888:1 contrast ratio also ensures images, video and graphics all look their best.
The HTC One’s display, on the other hand, is a touch brighter and has a higher pixel density. Otherwise, they’re neck and neck.
Internals, performance and battery life
When it comes to hardware grunt, however, the Nexus 5 motors ahead of its two big rivals. Inside is a quad-core, 2.3GHz Snapdragon 800 CPU – the same processor found in the lightning-fast Samsung Galaxy Note 3 (web ID: 384823) – and it’s coupled with an Adreno 330 GPU and 2GB of RAM. With the new Android KitKat operating system onboard, navigating the OS and browsing the web feels slick.
It’s a combination that delivers superb performance in benchmark tests, too. With scores of 2539 in Geekbench 2 and 24fps in the demanding GFXBench 2.7 T-Rex HD test, it’s faster than both the Galaxy S4 and the HTC One, and it shines when tasked with taxing games such as Asphalt 8: Airborne.
Battery capacity isn’t as high as that of the Galaxy S4 – 2300mAh compared to 2600mAh – and it showed in our tests. We carried out a series of typical tasks over 3G in one 24-hour period and noted the capacity remaining at the end of that time; the Nexus 5 lagged behind its rivals, with 50% remaining on the gauge at the end of our test period. As with most modern smartphones, you’ll need to charge it every day; in fact, you may have to plug it into the mains at the beginning of the evening, too. The Samsung and HTC will give you a few more hours.
Cameras
Oddly, the Nexus’ turn of speed doesn’t translate to the device’s 8-megapixel camera, a curiously underpowered inclusion considering the competition. It’s reasonably quick to fire up – plus you can launch it from the lockscreen with a quick left-swipe of the camera icon – but it can take up to three seconds from pressing the onscreen shutter button to image capture, which is frustrating.
Image quality is so-so. Often, we found the autofocus failed to get a lock, resulting in soft, blurry photos. Metering was inconsistent, too: with areas of light and dark within the frame, such as a bright sky and a shadowy city street, we found that the camera struggled to find a balance, either overexposing the former or underexposing the latter.
This is a shame, since the sensor and optical image stabilisation system are capable of producing detailed snaps. The camera is effective in low light, too, and can shoot steady, handheld video at 1080p. Also, if you switch on the new HDR+ feature, the metering issues are largely addressed, lightening foreground areas and keeping bright skies in check. However, this slows shot-to-shot times further, and doesn’t work well with moving subjects.
Connectivity and audio
Finally, as you’d expect from a top-end smartphone, the Nexus 5 delivers in terms of connectivity: you get dual-band 802.11ac Wi-Fi, NFC, Bluetooth 4, GPS and 4G support. Audio quality is fine, too, both in-call and from the speaker at the bottom edge of the phone.
The one black mark against the Nexus 5 is the absence of a user-replaceable battery or a microSD slot. However, as reported on teardown site iFixit, the rear panel can be removed far more easily than most.
Verdict
The Nexus 5 is a superb smartphone: we like the design; it’s as powerful as they come; the screen is great; it runs the latest version of Android; and the camera – although a weak point – is capable of producing good snaps and video if you’re patient.
It’s the price, however, that swings things in favour of this Android handset. At $399 for the 16GB version, and $449 for the 32GB one, it undercuts its rivals significantly. That, coupled with its all-round capabilities, help to push the Nexus 5 to the top of the PC&TA A-List.
Verdict
Thanks to its all-round top performance and a price that undercuts its closest rivals, the Nexus 5 is our new favourite smartphone
Performance
Features & Design
Value for Money
Overall
Specs
16GB $399 AUD
32GB $449 AUD
(pricing info)
Copyright © PC Pro, Dennis Publishing
Copyright © PC Authority, nextmedia
Tags:
5 hardware nexus review
By Jonathan Bray
Feb 18 2014
1:17PM