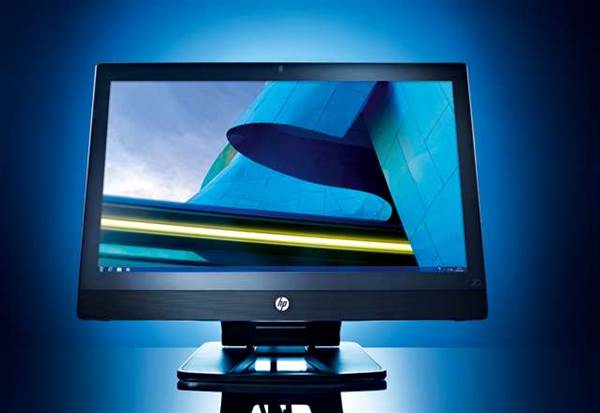 The market for all-in-one PCs has been pretty static over the past year or so, with Apple’s iMac and Sony’s VAIOs at the top of the heap, a bevy of cheaper and less appealing machines below, and precious little innovation. HP’s Z1 changes all that, with one of the most exciting chassis designs we’ve seen.
Design

The screen tilts back, two tabs open up the screen like a car bonnet. Click to enlarge.
Newsletter Signup

I have read and accept the privacy policy and terms and conditions and by submitting my email address I agree to receive the Business IT newsletter and receive special offers on behalf of Business IT, nextmedia and its valued partners. We will not share your details with third parties.
Initially, it looks like any other all-in-one: it’s a screen on a stand with a computer clamped to the back. Press the green button on the hinge, however, and the Z1’s 27in IPS screen can be tilted to a horizontal position. A quick tug on two tabs at the bottom of the screen, and the display lifts up like a car bonnet, revealing the PC’s insides.
It’s the Z1’s party piece and it’s deeply impressive. The screen lifts up smoothly on its own hydraulic cylinder – so the lid also closes gently – and the PC’s components are laid bare, most of them in proprietary caddies and enclosures.
On the left-hand side is the power supply, housed in a long, narrow metal shroud, and it’s connected to the PC with a standard 24-pin ATX power plug. The graphics card is a mobile part mounted on a desktop-style card and connected to the board via an MXM PCI Express x16 slot. Beside that is the hard disk, which is held in a plastic caddy that pivots in and out of the case, and also inside is a removable heatsink and optical drive.
Almost all the main components can be removed with a quick tug of a green tab; a Torx screwdriver will be needed to remove the Intel Xeon processor and its heatsink. The motherboard itself is accessible, too: the DIMM sockets and SATA ports are easy to access, and the mobile Wi-Fi chip sits in a mini-PCI Express x1 slot with two more of these small ports free alongside it.
HP’s ingenious design extends further than the removable components. There’s only one 3.5in hard disk enclosure, but it’s home to two combined SATA and power connectors, with support for RAID0 and 1 included, so in theory you could install a pair of 2.5in drives.
Alas, there are no preinstalled fittings, so this approach would require DIY bodging. Elsewhere, two daughterboards are pressed into service: one for the USB sockets, card reader and audio connections on the right-hand side, and another for the four small speakers at the front of the machine. There’s even a handy diagram of the internals on the inside of the lid.
It’s all put together extremely well, with cables hidden and routed between components, and we can’t fault the build quality: the huge stand and sturdy enclosure make for a solid-feeling machine. Its sheer bulk means the act of moving the screen up and down requires a bit of muscle, though.
Screen and performance 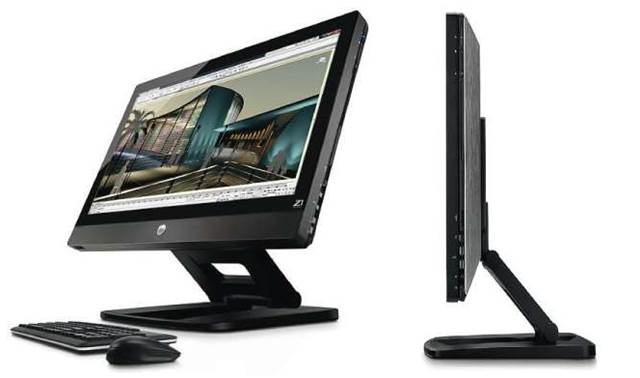 Don’t for one minute think the internal design is the Z1’s only appealing feature: the IPS panel is a sterling piece of work. It measures 27in from corner to corner, sports a resolution of 2560 x 1440, and detail is pin-sharp. There’s no sign of backlight bleed and we have no issues when it comes to quality. The 473cd/m2 maximum brightness makes for a panel that’s bright without endangering your retinas, and the contrast ratio of 637:1 is fine. Colour accuracy is excellent thanks to a Delta E of 2.1 – better than almost everything else out there, and a fine foil for the similarly excellent iMac.
HP has specified the Z1 accordingly. Our review sample is powered by an Intel Xeon E3-1280, which uses the 22nm Ivy Bridge architecture, boasts four Hyper-Threaded cores, and runs at 3.5GHz with a 3.9GHz Turbo Boost. That’s a potent CPU, and its application benchmark score of 1.02 is in line with the performance we’ve seen from top Ivy Bridge consumer chips. It’s enough to put paid to most demanding tasks, and is assisted by 8GB of RAM, a 1TB hard disk and a DVD writer.
The Quadro 3000M is one of Nvidia’s beefiest laptop graphics cards, with 240 stream processors and 2GB of GDDR5 RAM. We loaded up the workstation graphics benchmark SPECviewperf 11 and recorded an average frame rate of 26fps across its eight individual tests.
No matter what we threw at it, the HP kept its cool – impressive given the tight confines of its all-in-one chassis. The processor peaked at 81˚C – a little hot, but not dangerous – and the graphics card’s top temperature of 45˚C is perfectly manageable. There are a couple of hot spots on the exterior, with most heat escaping through vents at the top of the chassis, but we’re pleased that little noise escapes the Z1’s shell.
The catch is the price: our review sample will set you back well over $5000 and can’t just be purchased directly from the online store.
HP does offer more affordable configurations that do pop up on the store. The entry-level model retains the excellent display, but comes with a Core i3-2120, 2GB of RAM and no discrete graphics, and weighs in at a much more palatable $2499. The cheapest model with an Intel Xeon features the 3.3GHz E3-1245, 8GB of RAM, a 1TB hard disk, and no discrete graphics for $2999.
The real advantage here, though, is the flexibility of the Z1’s design. With all the components so easy to replace and upgrade, the Z1 has the potential to last much longer than an iMac equivalent, for example, while still offering all the elegant, space-saving advantages.
Conclusion
The HP Z1 is, therefore, a uniquely appealing machine: it offers more than enough workstation grunt for intensive applications, especially ones that take advantage of Nvidia’s Quadro GPU (think video production, CAD and 3D rendering work). It also boasts a stunning screen, packed in a chassis that’s built with future expansion and ease of repair in mind.
With this in mind it is unlikely that mere mortals will ever get their hands on the Z1. It’s expensive, but as it’s the best designed all-in-one on the market, we’d say it’s a price worth paying, and a concept we’d love to see eventually turn in a more consumer-focused form.
Verdict
A uniquely upgradable design, plenty of power and a stonking screen make the high price of the HP Z1 worth paying. Read the review.
Performance
Features & Design
Value for Money
Overall
Specs
From $2499 AUD
(pricing info)
Copyright © Alphr, Dennis Publishing
Tags:
all in one hardware hp review z1
By Mike Jennings
Sep 25 2012
12:17PM