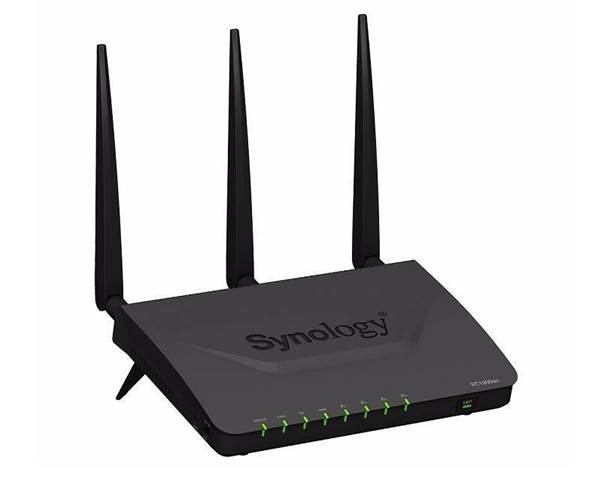 The first wireless router from NAS maker Synology is a resounding success.

Synology produces some of the best network attached storage (NAS) devices around, but the RT1900ac is the company’s first attempt at a wireless router. It’s a 3x3-MIMO-stream, simultaneous-dual-band router, with a maximum 1,300Mbits/sec link speed over 802.11ac and beamforming support.

Multiple-input and multiple-output (MIMO) and beamforming basically mean the Synology RT1900ac supports multiple antennae and wireless streams – three, in this case – for improved performance, along with the most recent wireless standard and both 2.4GHz and 5GHz bands.

That’s all good, but those specs don’t separate it all that much from competitive products. However, it's the user interface that puts the RT1900ac at the head of the pack.

Synology has taken the familiar DiskStation Manager (DSM) interface from its NAS range and reimagined it as Synology Router Manager (SRM). They’re very similar, so Synology NAS owners will feel right at home. The web interface feels like a desktop OS, with separate windows and shortcuts to settings and features.

All the crucial network settings are ordered sensibly in the Network Center app, with a networkmap showing which devices are currently connected and a traffic control page allowing you to give priority to specific devices. The grid-based parental-control scheduler is fantastic, letting you quickly drag and select blocks of time to limit access to certain websites. 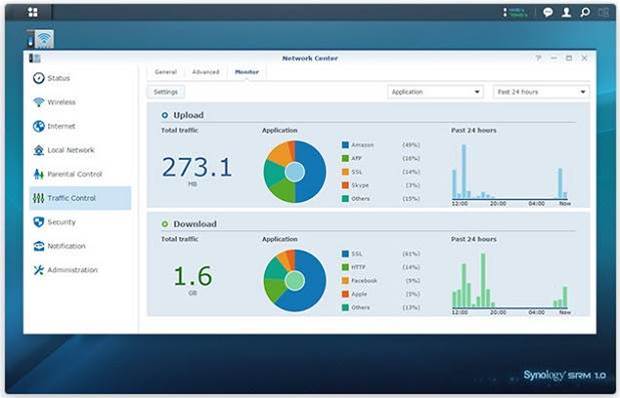 Even the initial setup is straightforward, with a quick guide walking you through each step. It also forces you to create a unique username and password, which should boost security; many of the routers in this Labs default to admin/ admin and don’t prompt you to change them when you first log in.

The dual-core, 1GHz processor, 4GB of flash storage and 256MB of RAM keep the interface ticking over smoothly, even when you have multiple windows open at once.

With an SD card reader as well as a USB 3 port, you could add 128GB of flash storage and not need to make room for an external hard disk next to the router. Don’t expect blistering speeds, though: USB 3 file-transfer performance was merely respectable, at 53.7MB/sec.

The port can also be used with 3G/4G mobile broadband dongles as a backup, in case your primary connection fails. A dedicated DS Router app is also available for Android and iOS for applying parental controls, checking the number of connected devices and tweaking firewall rules.

The RT1900ac features a number of neat touches, such as the ability to schedule when the activity LEDs on the front of the unit are switched on: turning them off between midnight and 7am could help you get to sleep if the router is located in a bedroom, but they’ll be on during the day for troubleshooting. 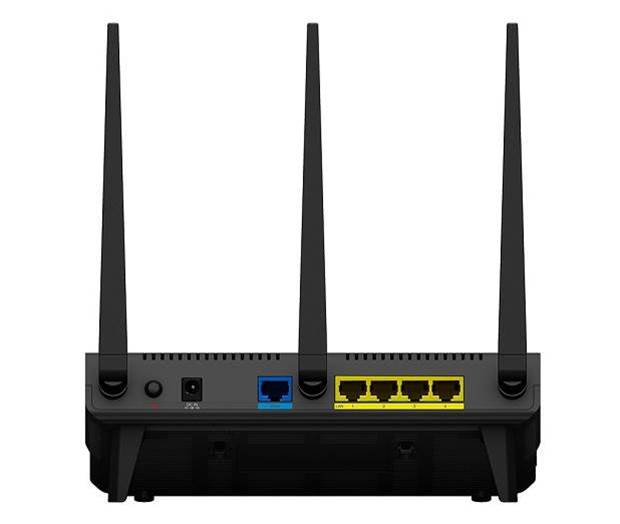 There’s little on the outside to indicate the software excellence within; the RT1900ac is diminutive. The two feet on the back help elevate the unit to keep it cool, but otherwise it’s a nondescript black box. The four Gigabit LAN ports and single Gigabit WAN port are par for the course, as are the three removable, adjustable antennae that let you fine-tune the coverage of your wireless network.

Wireless performance was very good at close range, producing 78MB/sec over 802.11ac. Over 5GHz 802.11n, 16.6MB/sec is approaching the top end of a 2x2-stream device’s capabilities; other routers are faster, but not by a lot.

Moving to long range, 802.11ac performance was consistent, with 27.8MB/sec falling only just behind the fastest of similar models that we’ve tested. A 5GHz 802.11n result of just 9.2MB/sec is slightly below average, however.

With such a strong set of performance figures coupled to a competitive price, the RT1900ac would stand up on its own even without Synology’s fantastic user interface. SRM makes all the difference: it’s responsive, user-friendly without excluding advanced features, and unbelievably flexible. It’s better than any other router interface we’ve used before and sets the gold standard for the competition in future.