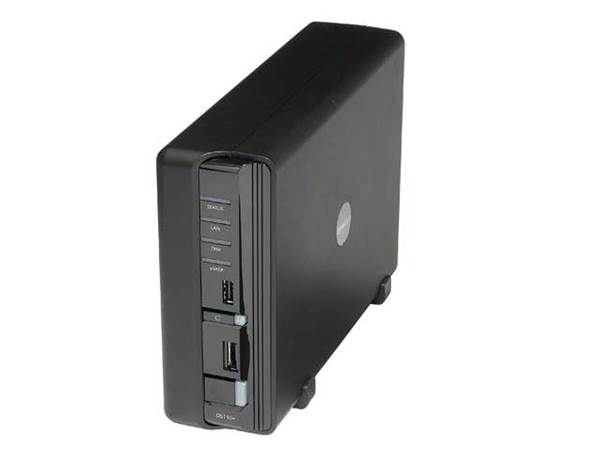 The DiskStation DS110+ is a single-bay NAS device aimed at the SMB market. It’s supplied diskless, supports 2.5in or 3.5in drives up to 2TB in size, and installation is simple. Two rear-facing USB 2 ports and Gigabit Ethernet accompany eSATA and USB 2 ports at the front. These allow hard drives or printers to be shared across a network, and data to be uploaded from connected drives.

Setup is gloriously refined. Synology’s software locates the DS110+ on the network and then uploads and installs the Linux-based operating system. Via an 802.11n wireless connection, the Synology was up and running in around 12 minutes.

Synology’s DiskStation Manager 3 software is a far cry from your average web-based front-end. With its window-based approach it mimics a swish Linux desktop interface, and even has multitasking support. It’s easy to navigate: an ever-present search box makes it simple to find the feature you need, while a taskbar lets you view and switch between open windows.

The DS110+ is capable of handling multiple users (up to 256 individuals) with passwords, quotas and separate access permissions for shared folders, and it’s possible to limit access to the various features. Scheduled backups can target local USB disks, other Synology NAS devices or Amazon’s S3 cloud-based storage. But regardless of your needs, the wizard-based setup routines make it easier to get going than any other NAS device we’ve encountered.

Performance is impressive. Via the SMB protocol the DS110+ wrote large files at 57.4MB/sec and read them back at 99.7MB/sec, while small files saw read and write speeds drop to 12.8MB/ sec and 8.5MB/sec respectively.

That, along with great ease of use and a huge range of features, goes a long way towards justifying it’s high price. If you need a reliable and flexible business drive, this is it.