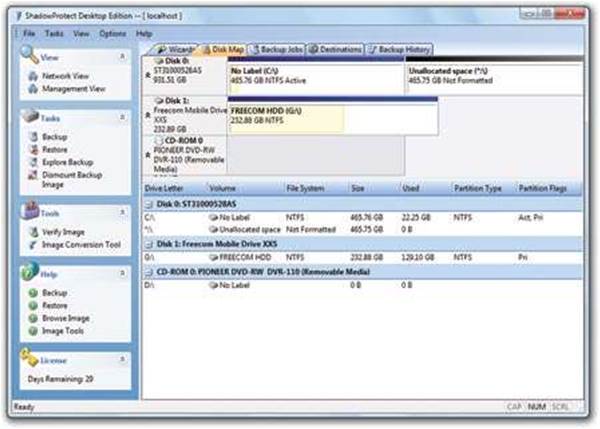 ShadowProtect Desktop is a standalone backup tool for those who need professional-grade peace of mind for a single PC. Unlike Acronis it doesn’t operate at the file level: backups can be taken only of whole storage volumes or of your entire system.
That might sound limiting, but adding incremental backups to a base system image gives a reasonable level of protection, and when space becomes low these files can be consolidated into a new base image. It doesn’t interfere with usage: by hooking into the ShadowCopy service it’s able to back up files even while you’re using them, and automatic throttling keeps resource usage down.
Once created, image files can be mounted as virtual drives. Intriguingly, images can also be converted into virtual disks and booted inside VirtualBox, VMware or Microsoft’s own virtualisation host. When we tried it out with VirtualBox, though, the image failed to boot, so your mileage may vary.
Newsletter Signup

I have read and accept the privacy policy and terms and conditions and by submitting my email address I agree to receive the Business IT newsletter and receive special offers on behalf of Business IT, nextmedia and its valued partners. We will not share your details with third parties.
ShadowProtect also features hardware-independent restoration. There’s a choice of two recovery environments, one based on Windows Server 2008, for modern hardware support, and one on Windows Server 2003 for legacy hardware. There’s a useful BCD repair tool, for recreating your boot configuration after you’ve moved drive images around, and a built-in UltraVNC server gives you remote control.
ShadowProtect does a fine job, but next to True Image it looks a little rudimentary. At current pricing it’s more expensive, too, although that does include hardware-independence features that cost extra with Acronis.
Still, ShadowProtect is straightforward, and the support terms are rather more liberal than Acronis’ – you get a year’s technical support included in the price. So while it isn’t the shiniest or most flexible option, as a functional, professionally-supported tool, it does its job.
Verdict
A simple backup tool, but it's functional and well put together.
Ease of Use
Features
Value for Money
Overall
Specs
$89.95 AUD
(pricing info)
Copyright © Alphr, Dennis Publishing
Tags:
4 backup desktop shadowprotect software storagecraft
By Darien Graham-Smith
Mar 31 2011
5:33PM