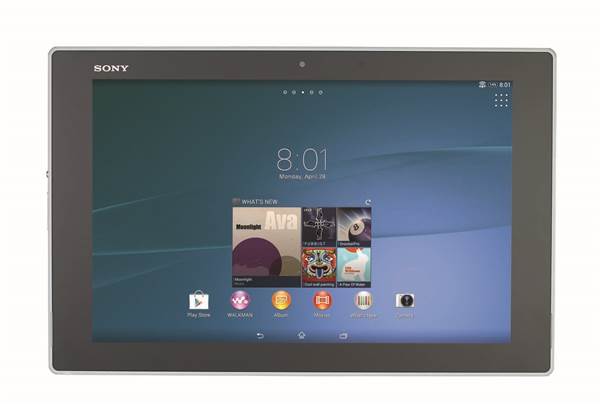 Last year’s Sony Xperia Tablet Z was a mixed bag of wasted potential and beautiful design. We hoped that in developing the Tablet Z’s successor, the Xperia Z2 Tablet, Sony might address some of our concerns, without compromising on the elegant design choices that set it apart from its rivals.

Physically, little has changed, and that’s a good thing: the Z2 shares its predecessor’s light, wafer-thin chassis. In fact, at 424g, it’s 71g lighter and has managed to shave 1.4mm from the thickness, from 6.9mm to 5.5mm. It’s a minuscule difference, but we were impressed nonetheless.

It retains its predecessor’s tasteful looks, too. The sides are deadly straight, the edges rounded off just enough to prevent the tablet from digging into your palms uncomfortably, but not enough to detract from the lean, spare design. Like its predecessor and smartphone cousins in the Xperia range, the Z2 also has dust- and water-resistant sealed flaps covering its ports, granting it a hardiness its rivals can’t match.

It still runs Android; this time it’s KitKat onboard, and there’s a familiar selection of subtle embellishments, such as the repositioning of the app drawer launcher icon to the top-right corner and the ability to reorganise apps within the app drawer.

The hardware has been improved, too, starting with the 1,920 x 1,200-resolution screen. We found that the Z2’s LED backlight topped out at a maximum brightness of 409cd/m², more than enough for outside use. The contrast ratio was impressive, too, at 908:1. It’s a significant improvement over the Tablet Z’s display, and it compares favourably with the current A-List title-holder, the Apple iPad Air. The resolution is lower, but at the sorts of distances you’ll be holding a tablet, the Z2’s pixel density of 224ppi isn’t an issue; you have to look pretty whard to see the pixels.

The improvements continue under the hood. The Z2 has swapped out the Tablet Z’s 1.5GHz Snapdragon S4 Pro for a quad-core 2.3GHz Qualcomm Snapdragon 801 CPU, supported by 3GB of RAM and 16GB or 32GB of storage. It performed considerably faster than its predecessor, with a SunSpider JavaScript test score of 885ms to the Tablet Z’s more plodding score of 2,074ms; it also beat the now-ageing Nexus 10’s score of 1,362ms.

However, while its overall performance was a clear step up from its stablemate, it found itself unable to match the performance of the market leaders. It struggled to top the Samsung Galaxy Note 10.1 2014 Edition’s SunSpider score of 612ms or the iPad Air’s fantastic 391ms result.

The Z2 is able to compete with its rivals both graphically and in terms of battery life, however. In the onscreen GFXBench T-Rex HD test, the Z2 achieved a frame rate of 28fps, beating the Note 10.1’s 14fps and even the iPad Air’s score of 21fps. In our video-based battery test, with the screen set to a brightness of 120cd/m², the Z2 kept going for 14hrs 38mins, 1hr 43mins longer than the iPad Air, and more than three hours longer than the Samsung Galaxy Note 10.1 2014 Edition. The Z2’s battery evidently has more than enough juice to keep it going all day.

The Z2’s 8-megapixel rear camera is less impressive. It produces superficially sharp snaps, but closer scrutiny reveals that photographs are quite noisy and grainy.

Connectivity options are generous, though, with dual-band 802.11ac Wi-Fi and Bluetooth 4 onboard; an infrared transmitter remains as well, allowing the Z2 to be used as an oversized universal remote control. The ability to throw video or music to DLNA-compatible devices also returns. Elsewhere, you get a microSDXC slot for storage expansion, an MHL-enabled micro-USB socket so you can plug it into your TV’s HDMI input, and a 3.5mm headset jack. There’s also a 4G version of the Z2 that costs $749.

The Sony Xperia Z2 Tablet is a tremendously attractive and thoughtfully designed tablet. It can’t match the iPad Air for all-round performance, but its lower price helps it nudge ahead of the Samsung Galaxy Note 10.1 2014 Edition in the battle for best full-sized Android tablet.