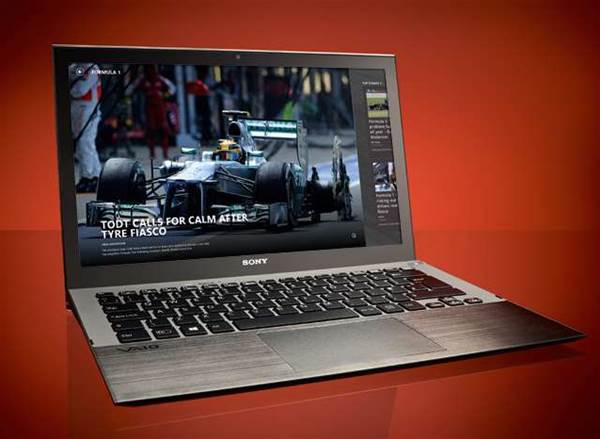 [This new Sony Vaio Pro 13 caught our eye earlier this year for a couple of reasons: first, it's one of the lightest Ultrabook Windows laptops with a quality design. Second, you can buy a second battery which extends the battery life by quite a lot. PC & Tech Authority magazine recently published this review of the Vaio Pro 13, so we decided to share it with you below.]
Sony’s VAIO Pro 13 rises from the ashes of the VAIO Z Series, Sony’s legendary ultraportable. Once again, Sony has attempted to redefine what we expect from a lightweight, portable laptop.
Newsletter Signup

I have read and accept the privacy policy and terms and conditions and by submitting my email address I agree to receive the Business IT newsletter and receive special offers on behalf of Business IT, nextmedia and its valued partners. We will not share your details with third parties.
With Intel’s Haswell processors and a Full HD touchscreen packed into a 13in chassis that barely weighs a kilogram, the VAIO Pro 13 is entirely deserving of its Intel Ultrabook moniker.
Design 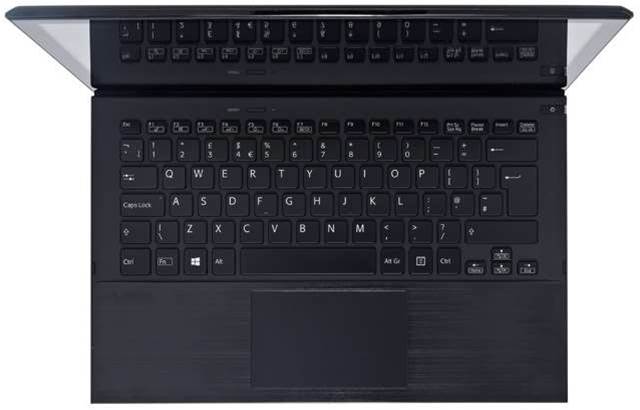 The laptop has undergone a subtle evolution rather than a dramatic redesign. The same silver flash slashes the laptop’s rear, and the same VAIO logo adorns the jet-black lid, but Sony has softened the VAIO Z’s squared-off physique to create a sleeker, more streamlined appearance.
More dramatically, the redesign sees the VAIO Pro emerge as the lightest 13in Ultrabook to grace our test labs. Although the addition of a touchscreen means the chassis is a hair’s breadth thicker than the previous model (18mm rather than 17mm), Sony has trimmed the weight to a feather-light 1.05kg.
As you might expect, there’s a price to pay for such pared-down design. Despite the liberal use of super-strong carbon fibre, the VAIO Pro’s lightweight frame feels much more flexible than the Apple MacBook Air or the Dell XPS 13. Admittedly, yanking a laptop’s body to and fro is no scientific measure of its toughness, but in a field where quality is synonymous with rigidity, the VAIO Pro 13’s supple chassis is a mite disconcerting.
In all the key areas, however, the VAIO Pro oozes quality, and Sony has clearly been hard at work improving on the VAIO Z Series’ ergonomics.
The Scrabble-tile keyboard is far more responsive and comfortable than before, since each key now has noticeably more travel and feedback, and the small, fiddly touchpad has made way for a much larger one with a buttonless design.
The good news continues elsewhere. Accommodating a touchscreen in a 1.05kg laptop is a feat in itself, but the VAIO Pro’s Full HD touchscreen is as good as they get. The Windows 8 Start screen bursts forth in a riot of colour, and reacts instantly to the lightest brush and sweep of a finger, tiles sliding by with delicious fluidity.
Display 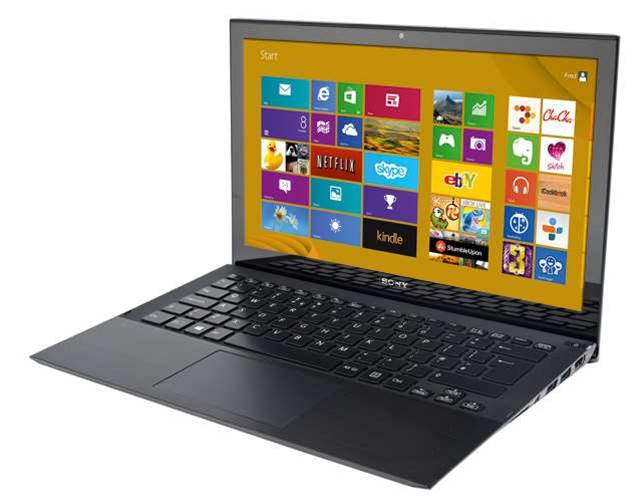 The Sony’s 13in display is technically impressive, too. Brightness is ample and thanks to the panel’s excellent black levels, the contrast ratio of 932:1 is up there with the best Ultrabooks.
The panel’s colour temperature and gamma are a mere whisker away from perfection. Viewing angles are wide, and colour accuracy is spot on – the VAIO Pro 13’s display in this regard is excellent by laptop standards. The only minor niggle is that the Sony’s touchscreen layer adds a slight graininess to images, but it isn’t distracting.
Performance
The VAIO Pro 13 packs ample performance into its stick-thin chassis. Our review unit partnered one of the latest Intel Haswell processors – the dual-core 1.8GHz Core i7-4500U – with 4GB of DDR3L low-voltage RAM and a 128GB SSD. In everyday use, it’s just as responsive as the best Ultrabooks, with ultra-quick startup times and enough power to whip applications into view in the blink of an eye.
For raw application speed, though, Intel’s Haswell processors are no quicker than their Ivy Bridge predecessors. Performance in our Real World Benchmarks was broadly similar, and the VAIO Pro 13 returned an unremarkable score.
Sony’s VAIO Control Center application makes it possible to toggle between Silent, Standard and Performance cooling modes. We repeated our benchmarks with the laptop in Performance mode, and while the VAIO Pro’s whiny, high-pitched fan sped up more readily, the extra cooling allowed the Core i7 CPU to eke out a little more performance.
Graphics performance is also on a par with that of the previous generation. The new Intel HD Graphics 4400 GPU saves power by using a lower base clock (250MHz as opposed to 350MHz in the Intel HD Graphics 4000), but based on our benchmarking, performance remains limited.
Battery life 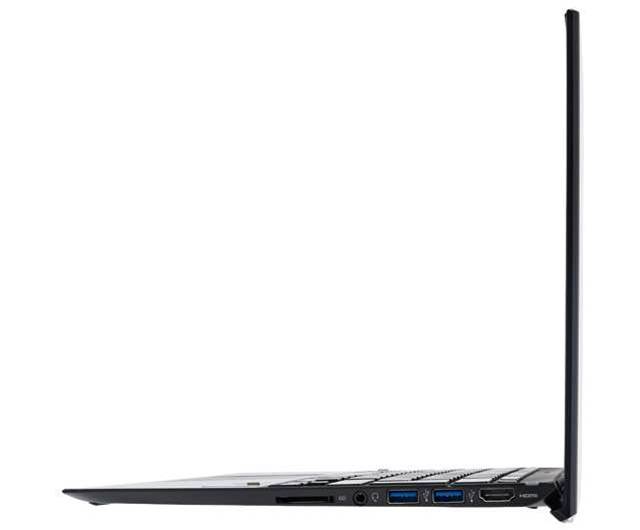 Performance may not have improved, but Intel’s Haswell architecture has made huge improvements to power consumption. With the screen dimmed and Wi-Fi off, the VAIO Pro 13’s 4470mAh battery lasted for 10hrs 34mins in our light-use test – significantly longer than Sony’s claim of seven hours.
A battery life of more than ten hours is impressive by any standards, but the optional secondary battery allows the VAIO Pro to last even longer. Spend an extra $250, and the slim, wedge-shaped battery pack clips securely to the VAIO Pro’s underside, tilting the keyboard forwards slightly.
Sony wasn’t able to provide us with one for testing, but it claims the extended battery more than doubles the VAIO Pro’s usable battery life, from seven to 18 hours. While we certainly have reservations about the price premium attached to this extra battery, it should give the Vaio Pro 13 some amazing endurance.
Other features
Despite the VAIO Pro’s newly slim figure, Sony has squeezed in most of the essentials. It has a crisp, decent-quality 0.9-megapixel webcam, and finds space for two USB 3 ports, HDMI, a 3.5mm headset jack and an SD card reader. Wireless connectivity stretches to dual-band 802.11n, NFC (under the left wristrest) and Bluetooth 4.
There’s no Ethernet socket, simply because there’s no room for one, but Sony offers an optional $99 mini-USB wireless access point to deal with the omission. This clips onto the USB port on the Sony’s power supply and, with its single Gigabit Ethernet connection, is capable of creating a dual-band 802.11n wireless network you can use to access the wired network.
Price
As ever, buying through Sony’s website makes it possible to tailor the VAIO Pro 13 to a wide range of budgets and applications.
At its most affordable, the VAIO Pro 13 sports an Intel Core i5-4200U processor, 4GB of RAM, a 128GB SSD and a touch Full HD display for $1299. Sony’s website offers two versions of this Core i5 variant, with both silver and carbon-black models available. Upgrading to a Core i7 CPU bumps the price to $1999, a seemingly steep jump in cost that also increases the storage to a 256GB SSD. This high end model is only available in black.
With the VAIO Pro 13, Sony has taken the essence of the VAIO Z Series and honed it to near-perfection. Only time will tell if the VAIO Pro 13’s flexible chassis will last the course, but it’s hard not to be impressed. The VAIO Pro 13 crams an equivalent amount of power and versatility into the very lightest Ultrabook chassis money can buy.
Verdict
Sony pushes the boundaries of the Ultrabook concept with the slim, powerful, ultra-light VAIO Pro 13, which sports a superb display as well as a reasonable price. Read the review.
Performance
Features & Design
Value for Money
Overall
Specs
$1999 AUD
(pricing info)
Copyright © PC Pro, Dennis Publishing
Copyright © PC Authority, nextmedia
Tags:
13 hardware pro review sony ultrabook vaio
By Sasha Muller
Oct 2 2013
11:21AM