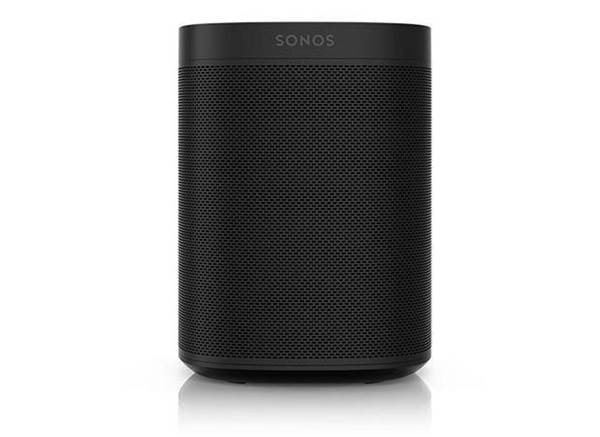 Amazon Alexa and Google Assistant join forces in the smartest speaker yet – and it sounds great, too.

Google, Amazon and Apple aren’t the only ones battling it out in the rapidly emerging smart speaker market. Sonos has joined the fray, which is good news – because when it comes to multi-room audio, Sonos stands head and shoulders above the competition.

The reason for its success is simple: Sonos’ family of speakers blend superb sound quality, an easy-to-use mobile app and mesh Wi-Fi networking to spread music effortlessly around the home.

Now, the Sonos One takes that one step further: it combines Sonos’ multi-room talents with the latest in voice control from Amazon Alexa and, coming sometime later in 2018, Google Assistant, too.

Take one glance at the Sonos One, and you’ve be forgiven for thinking that you’re looking at the other compact speaker in Sonos’ family, the Play:1. Indeed, put the two side by side, and the near-identical dimensions suggest all Sonos has done is taken its cutest model in the range, given it a very subtle makeover and added an array of smart assistant microphones.

Whatever the company has done, the result is a speaker that’s unobtrusive and compact enough to fit almost anywhere in the home. Granted, the One isn’t the most stylish-looking thing but its rounded edges, squat profile, and all-black or all-white colour scheme won’t draw undue attention to themselves.

A single power cable trails neatly out of the rear, four rubber feet give the One a firm grip onto the surfaces beneath, and a single Ethernet socket allows for wired operation where Wi-Fi isn’t a viable option. The only fundamental difference between the Play One and the Play:1 is that Sonos has removed the threaded speaker mount, so discreet wall-mounting is no longer an option. 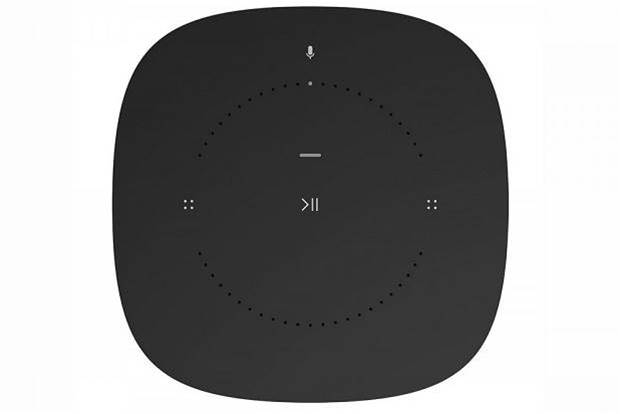 Sonos has also ditched the physical buttons of the Play:1 in favour of a handful of touch-sensitive controls dotted around the top panel. The central button pauses or resumes playback, buttons either side adjust the volume and another positioned above toggles the microphone on and off, with a small white LED signifying when the One is listening out for voice commands. The only other button is placed at the rear, and for good reason – it’s only used at the beginning of the setup process, so you won’t need to use it very often.

One limitation is that the Sonos One can’t do everything Amazon’s Alexa-powered Echo products can. You can ask general questions about the weather, nearby shops and services, perform maths and weight conversion calculations, set alarms and reminders, amongst many other things. However, you can’t use any of the voice call, drop-in or messaging features, nor can you ask Alexa to read ebooks, or receive notifications.

And you can’t change the wake word, either. If those omissions are a deal-breaker, then bear in mind that you can always buy a $79 Echo Dot instead and use the Sonos skill to control your Sonos setup from that.

As you’d expect, however, the One works seamlessly with existing Sonos speakers. We set it up in an open-plan space with a Play:1 in the kitchen, a Play:3 in the dining area, and a further Play:1 in the upstairs bedroom. The setup process is more convoluted than that of a pure Sonos speaker, clunkily bouncing you between the Alexa and Sonos apps on your phone, but that effort is worthwhile. Add it to an existing system, and you can then control playback across an entire home with voice commands.

For instance, you can adjust the volume in specific zones (“Alexa, turn down Living Room” or “Alexa, turn Kitchen volume to [any number between 1 and 10]”); play music in different areas of the house (“Alexa, play Fleetwood Mac in Kitchen” or “Alexa, play Carl Craig in Bedroom”); or pause playback and skip through tracks.

What it doesn’t let you do currently, however, is group rooms together or to actively move the music from one room to another. One workaround is to group all the speakers in your home using the Sonos app, then ask Alexa to mute or unmute rooms as you see fit.

Alexa is also able to control playback from Spotify, TuneIn Radio and Amazon Music, but that isn’t the case for Tidal, Apple Music, Bandcamp, Soundcloud or any of the other services supported by Sonos. While playing music from these services, it’s only possible to pause playback or adjust the volume. And another thing to remember: you’ll need a Spotify Premium account if you want to take advantage of the integration.

Use any of the supported services, however, and Alexa comes into her own. You can ask Alexa to play music by genre, artist, or request specific tracks, albums, playlists, or indeed radio stations.

If you’re already used to pulling out your phone and choosing music from the Sonos app, voice control might seem more like a gimmick than a killer feature but it soon becomes second nature. Whether you’re lying quietly on the sofa, or surrounded by the din of the cooker hood and bubbling pots and pans, you can simply request the music, album or artist you want without even lifting a finger. Most of the time, Alexa will hear you, even if you can’t hear the tell-tale chime that tells you she’s heard the wake word.

Best of all, though, Alexa allows anyone in your household to play the music they want, when they want it, without having to reach for a phone, tablet or laptop first. 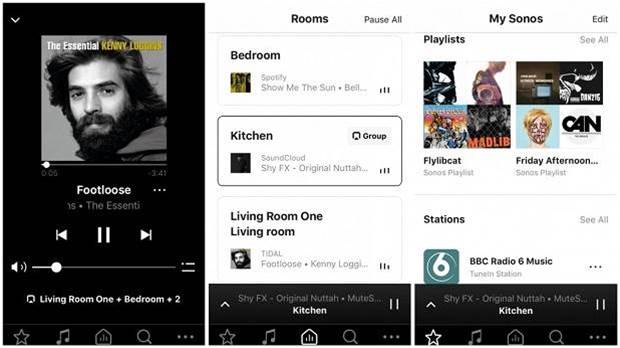 There are several teething troubles with Alexa, however. She doesn’t always respond consistently to commands. Sometimes she will allow you to pause the music but not to resume it again afterwards and other times she isn’t aware that music is playing so won’t accept playback commands at all.

Then there are the more fundamental bugs, where room-specific volume commands inexplicably stop working completely and Alexa insists, “that command is not supported by that device”. Sonos’ support staff are tirelessly helpful in troubleshooting such issues but it’s worth flagging that the experience isn’t currently 100% bug free.

Other issues are that Alexa can struggle to correctly decipher more unusual band or track names, or the fact that the first search result thrown up by your voice controls isn’t always the album you’re looking for. “Alexa, play the Pulp Fiction soundtrack” will result in her playing a seminal drum and bass track called Pulp Fiction by Alex Reece instead, and no amount of adjusting the syntax of your request will convince her otherwise.

In some instances, it’s possible to find what you’re looking for by spelling out the name of the band letter by letter – with unpronounceable artists such as Knx, this is an essential feature – but sometimes there’s simply no other option than to resort to using the Sonos app instead.

Next: sound quality and verdict