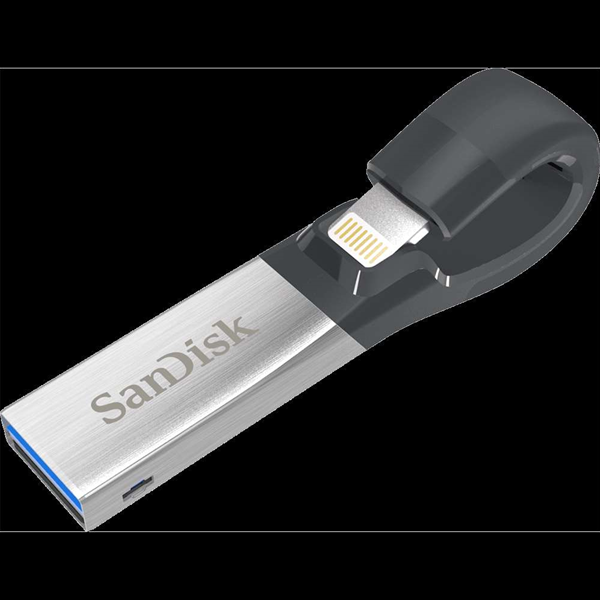 The iXpand Flash Drive 3.0 speeds up computer to iPad/iPhone file transfers thanks to a USB 3.0 interface.

We've previously reported on a variety of storage devices designed to bridge the gap between computers and mobile devices, and to fill the need for removable storage for iPads and iPhones. These include the Lexar microSD reader, and SanDisk's Connect Wireless Stick and Dual USB drive.

The latest addition to this SanDisk family is the iXpand Flash Drive 3.0 for iPhones and iPads. Unlike some earlier storage devices, this one includes a USB 3.0 port for faster file transfer to and from computers.

Other advantages of the new model are that it is about one third the size of its predecessor and the easily mislaid cap for the USB port has gone.

On the Lightning side, the connector is on a flexible though somewhat stiff U-shaped moulding attached to the metal USB shell that contains the electronics. The connector is said to fit most cases, and there was no interference with the case on the iPad used in our tests.

The accompanying iXpand Drive app takes care of copying photos from the device to the drive and files from the drive to the device; viewing or playing music, video and photo content stored on the device or the drive (including video formats not normally compatible with iOS such as AVI); and backing up the device's photo library, contacts, and photos from Facebook, Instagram and Picasa. It includes a handy display of the amount of free and used storage space on the drive and on the iPad or iPhone.

The app is supposed to support 'sharing' (saving) of photos from arbitrary apps to the iXpand Flash Drive, but each time we tried to use this feature iXpand Drive appeared to forget that the drive was connected.

The iXpand Flash Drive 3.0 is available in 16, 32, 64 and 128GB versions, with street prices from $44 to $235. We noticed significant variation in the prices charged by different retailers, so it may be worth shopping around.