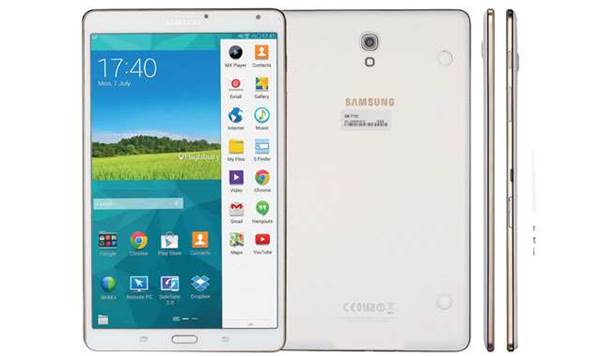 OLED screens are usually the preserve of smartphones and pricey TVs, but Samsung has bucked the trend with the Galaxy Tab S 8.4 – this tablet uses one of Samsung’s pixel-packed Super AMOLED panels with an eye-prickling resolution of 1,600 x 2,560.

There’s no doubt that it looks fabulous. One of the benefits of OLED displays is that they have no backlight and so deliver a perfect, or effectively infinite, contrast ratio. The result is a vivacious, highly dynamic screen that’s great at displaying everything from the deepest blacks to the brightest whites. Out of the box, we found colours oversaturated, but this is easy to change; there are a number of alternatives to the lurid default Adaptive mode in the tablet’s display menu settings, and we found the Basic setting delivered the most accurate colours.

The screen isn’t perfect, however. Since it’s OLED, maximum brightness isn’t that high. We measured it at 276cd/m2, the lowest in this group, and it isn’t as easy to read in bright light as the iPad mini. This type of display tends to suffer burn and discolouration over time – more so than IPS LCD – and it likely won’t look as good in a few years. Plus, the high resolution is mostly pointless; on a screen of this size, 1,200 x 1,920 is all you need.

Still, the tablet itself is handsome, measuring a mere 6.6mm thick and weighing only 294g; that’s almost as light as the Nexus 7, despite the larger screen. The finish is all plastic, with a dimpled white rear and metallic bronze edging, in a similar style to Samsung’s Galaxy S5 smartphone, and there are a couple of circular clips, flush to the rear, where the official cover attaches. It’s pleasant enough to hold, but not a patch on the sleek, metal iPad mini.

In general, performance is excellent. Processing power comes from a Exynos Octa 5 SoC, which has four cores clocked at 1.9GHz for the heavy lifting, and four at 1.3GHz for lighter loads. It scored 477ms in the SunSpider test, where it was beaten only by the iPad mini and the Lenovo Miix 2. It surged past both tablets in the multi-core Geekbench test with a score of 2,768. Battery life was impressive, too: it lasted 12hrs 22mins in our looping video test.

The only disappointment was gaming, where the high-resolution screen dragged down performance. In the GFXBench test, it gained only 14fps – firmly in the bottom half of the table.

That’s a disappointing result for a premium compact tablet, and we were equally unimpressed by the heavy-handed custom Android UI. The tile-based “Magazine UX” newsfeed, accessed with a swipe to the right, is an unnecessarily fussy addition to the device. There’s no doubt the Galaxy Tab S 8.4 is an excellent tablet, but it’s expensive, and there are too many niggles to nudge it into the upper echelons. For our money, the iPad mini and Nexus 7 remain the compact tablets to beat.