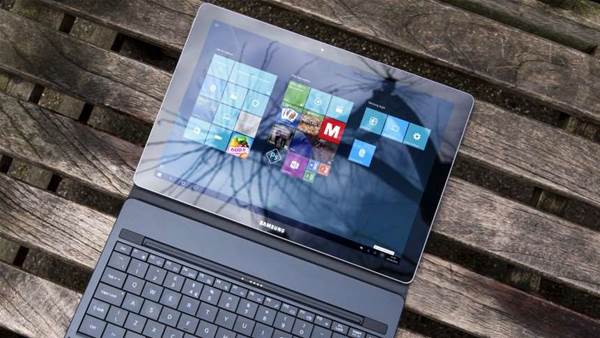 The Samsung Galaxy TabPro S 2-in-1 is not without its charms, but there's definitely room for improvement.

The Microsoft Surface was revolutionary when it first debuted four years ago. The idea of a wrap-around keyboard case on a tablet that ran Windows meant that – in theory at least – you could forgo the laptop for a lighter, much more portable device.

If imitation is the most sincere form of flattery, then it's a testament to Microsoft that the design is now commonplace, and no longer limited to Windows devices. With the iPad Pro, Apple has at last conceded that sometimes a keyboard and stylus is handy. HP also entered the fray with its Spectre x2, and now here is Samsung's alternative. Running Windows 10, the Samsung Galaxy TabPro S is a direct competitor to the Surface Pro 4 and Spectre x2. So how does it do?

Retailing at $1499, the Galaxy TabPro S is expensive for a tablet, even a 12in one such as this, so it's just as well it looks the part. The detachable tablet part is curved on the edges and flat on the back. It doesn't have any physical home button, unlike a phone and the bezel is perhaps a little thicker than I'd like, but it still looks the part.

Unlike some of its rivals, it's also a pretty clean design, having as it does a single USB Type-C port, used for data connections and charging. That presents its own problems, but in terms of appearance, it does keep things streamlined and minimalist.

Add on the faux leather keyboard case it comes bundled with and things look, if anything, more stylish. Just as with Microsoft's Surface series of tablets, the keyboard sits completely flush against the table when it's folded up and adds barely any heft at all to the machine as you carry it around.

The main selling point of the Galaxy TabPro S is its stunning AMOLED screen, and it's the main reason you might consider buying one ahead of its rivals. Anyone who has used a recent Samsung Galaxy S phone will know what to expect here: perfect contrast with true black, impeccable colour accuracy, and sharp, vibrant image quality.

The Galaxy TabPro delivers. At 12in across the diagonal, it's around four times the size of your average smartphone with the same resolution (2160 x 1400 pixels), the pixel density is a little lower, but bear in mind that it's still a higher resolution than the majority of televisions. In other words, it's perfectly sharp enough for most people's needs, and just as adding 4K to a smartphone screen is just plain silly, it would be overkill here as well.

So, onto the numbers. In our tests, we registered a top brightness of 363cd/m2, which is extremely high for any laptop screen, and it covers 99.9% of the sRGB gamut. Being AMOLED, its contrast ratio is perfect, too. In other words, you'd be hard pushed to find a better display on a device this size, be it a tablet, laptop or convertible.

It's also stylus compatible, just like the Surface Pro 4 and Spectre X2, although Samsung's Bluetooth C-Pen stylus isn't included in the box, which is disappointing.

Powering the Galaxy TabPro S is a dual-core Intel Core M3 CPU, backed up by 4GB RAM and a 128GB SSD. That's the same CPU you'll find within the Spectre x2 and entry-level Surface Pro 4, so we're on a reasonably level playing field here.

What this translates to in terms of day-to-day performance is a hybrid that will cope fine with word processing, web browsing and media consumption, but that might struggle to keep up with anything more complex. Although this is a Windows system, intensive gaming is pretty much out, given that Intel's HD Graphics 515 chip isn't the most powerful around.

In our demanding image, video and multitasking benchmark tests, the TabPro S gained an overall score of 32. That's ahead of the Spectre x2, which only achieved 23, but some way behind the Core i5 Surface Pro 4, which scored 44.

You might have thought the AMOLED screen might cause a dip in battery life, but that doesn't seem to be the case. The Galaxy TabPro S lasted a thoroughly respectable 6 hours 53 minutes before shutting down and requiring a recharge. With screen brightness set to 170cd/m2 to ensure parity, the TabPro S lasted a whole hour longer than the Spectre x2, although it lagged an hour behind the Surface Pro 4.

One final positive and negative about the battery: The Galaxy TabPro is powered by a USB Type-C charging cable. The plus side of this is that the whole thing charges from flat to full in a mere two-and-a-half hours. The negative is that this kind of cable still isn't commonplace, and Samsung hasn't thrown any kind of adapter in the box.

Another negative comes in the form of the keyboard cover, which despite the huge bonus of being included in the box, is far from the best we've used. Samsung has managed to get full sized keys in place (including a full complement of F-keys), but with virtually no space between them, typos are frequent, and the whole thing feels a little claustrophobic.

The trackpad isn't much better. I'm still yet to use a trackpad as good as an Apple MacBook’s on a Windows laptop, and this one changes nothing. It feels smooth under the finger, but its heavy, mechanical click and tiny dimensions mean accidental clicks, drags and moves are a frequent and irritating occurrence.

The case isn't as adaptable as its HP or Microsoft rivals, with only two typing positions on offer: an upright position for on-desk use, and a more shallow angle for when you want to work on your lap. The TabPro S' quality and broad viewing angles ensure this isn't a deal-breaker, though.

The worst thing about the design of the keyboard case, however, is the way it attaches to the rear of the tablet. Fail to clip it on perfectly and you run the risk of the two parting company in a sudden, and potentially catastrophic manner.

The Samsung Galaxy TabPro S is a confident first step in the space for Samsung, and it gets a huge amount right, not least the quality of the screen, which is top class, but also for the fact that includes a keyboard in the box where it's main rivals charge extra.

That keyboard cover, though – a critical part in the design of any 2-in-1 device – falls a long way short. Typing the entirety of the review on this has left me really missing a full-size chunky keyboard.

As an alternative to the Surface Pro 4, it's in a tough place. It's slightly cheaper than the equivalent spec of Surface Pro 4 once you factor in the cost of the Surface's Type Cover, although it doesn't include a stylus for the price, whereas the Surface Pro does.

Ultimately, your love for the Galaxy TabPro S will depend a lot on how you plan to use it. The screen quality means that people who use it a lot as a tablet will find it a wonderful companion, but those who do serious word processing would probably be better off with a laptop, or a hybrid with a stronger keyboard, such as the Surface Pro or iPad Pro.

Verdict
With its superb screen, the Galaxy TabPro S is an ideal 2-in-1 for people who want to use it mainly as a tablet, but those who need to do serious work would probably be better off with a laptop or a hybrid with a better keyboard.
Features
Value
Performance
Overall
Specs
$1499 AUD (keyboard cover included)
(pricing info)
• www.samsung.com
Intel Core M3 processor, 4GB RAM, 12in Super AMOLED display with 2160 x 1440-pixel resolution, 128GB Solid State Drive, 5200 mAh battery, Windows 10 Home.
Copyright © Alphr, Dennis Publishing
Tags:
2in1 hardware microsoft surface samsung samsung galaxy tabpro s tablet
By a Staff Writer
Apr 27 2016
7:07AM