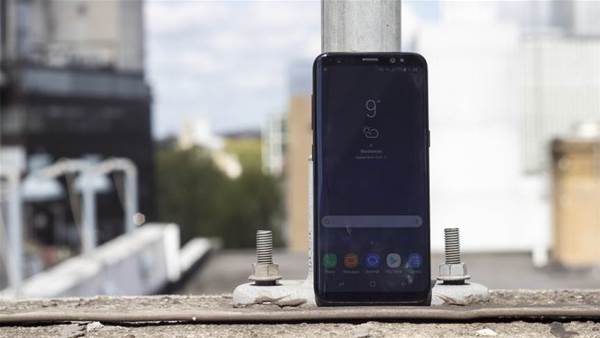 You know you want one. Here's the justification for getting Samsung's latest flagship phone.

Two things have changed to make this less a foregone conclusion than it was a couple of years ago, however. The first is that specifications have improved to the degree that even a cheap smartphone is good enough for most people. The second is the burnt out corpse of something that looks like it might have once been an elephant in the room: the Galaxy Note 7, removed from market after less than two months for being just a bit more flammable than advertised.

In short, we always knew that the Samsung Galaxy S8 was going to be good, but the stakes have been raised. It needs to be really good, and good enough to justify the high price tag too. It’s $1,199 outright and, on plans, costs from $72 per month (with 1GB from Woolworths Mobile). It will be available from most major Australian mobile carriers and retailers from 28 April – or on pre-order now.

And it is good. Very good indeed. The best smartphone you can buy, bar none. Whether it’s worth the cost though… that’s strictly between you and your wallet, but hopefully the next few pages can at least help you justify the loan to your bank manager. Print this out if you think it’ll help.

Samsung’s promotion for the S8 went a bit overboard, suggesting something that would make you rethink what a phone looks like. The Galaxy S8 doesn’t really do that. It’s still a block of metal and glass; it’s just a particularly beautiful one.

The physical home button is gone. That’s significant, but it isn’t the first Android phone to do that. The HTC One M8, for example, had no physical home button either. What is different is its dimensions: it’s now quite a bit taller, and longer than its predecessors, making it extremely comfortable in the hand. 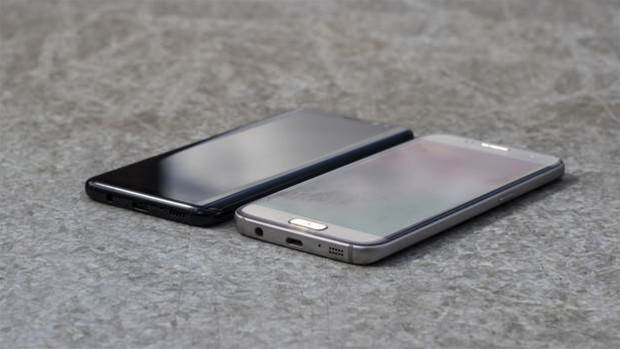 The Galaxy S7 was a slim and attractive handset, but the Galaxy S8 leaves it in the dust. Putting them side-by-side (see above), the differences are obvious. It isn’t not much bigger but it uses its space much more effectively with around 84% of the front occupied by the screen a not inconsequential upgrade on the S7’s 72%. It’s only three grams heavier, and is just 0.1mm thicker – which is odd, because if you put them next to each other a table, the Galaxy S8 looks substantially more svelte.

The phone inherits three design features from the previous generation: it’s IP68 certified, which means it’s waterproof in 1.5 metres of water for up to half an hour; it supports wireless charging; and it has expandable storage for microSD cards up to 256GB in size should the 64GB of onboard storage prove insufficient. USB Type-C is in, which is better in the long run, but not as convenient if your house, like ours, has become a retirement home for micro USB cables.

There’s even room for a 3.5mm headphone jack. Odd to think that’s a controversial move, but recent decisions by Apple and others to remove it have made including the 60-year-old port a major selling point in a 2017 flagship.

There are just three issues you can legitimately have with the design. The first is that a whole button is dedicated to Bixby, Samsung’s artificial intelligence assistant, which at the time of writing doesn’t do a great deal. For now, it’s essentially a second home button, but the fact that Samsung has given it such prominence suggests it won’t be for ever, so you can give them a pass on that.

The second is harder to defend: the location of the fingerprint scanner. It’s right next to the camera lens on the rear of the device, and while we were able to get used to this for unlocking during our time with the Galaxy S8, it was never as comfortable as one placed below the screen, as on the Galaxy S7 or Apple iPhone 7, or on the side of the device as with Sony’s recent smartphones. Placing it right next to the camera lens also means you often find yourself touching the lens, rather than the scanner, so you’d best get used to giving it a good polish before you take a photo.

And the third is the question mark over the Galaxy S8’s ability to handle a fall, given all the glass used in its design. Yes, it’s latest type of toughened Gorilla Glass, but recent drop tests suggest the S8 is less resilient to falls than the S7.

After you’ve finished gawking over the lovely design, the next thing you’ll notice is that the screen looks a bit different to current phones: it’s long and thin. While most phones work to a 16:9 aspect ratio, the S8 changes things up by increasing things to 18.5:9 with a resolution of 1,440 x 2,960 pixels. That’s a slightly taller ratio than the LG G6 with its unusual 18:9 mix. The idea, according to Samsung, is that you can get more screen real estate in a handset that won’t be uncomfortable for the small-pawed among us. 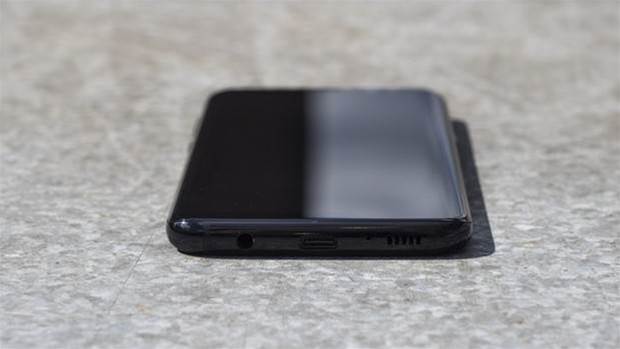 Of course, that’s not exactly the case. A regular 16:9 5.8in handset has a greater area and, even if you like the newer tall design, it’s not without its issues. For starters, most apps currently black out the bottom of the screen, leaving the familiar Android buttons in place. That means that the job could be done just as well by a bezel for the most part.

The real advantage is for pictures and video, but there are issues there, too. 16:9 is the universal standard for video and, if you watch any of those on your S8 you’re going to have to decide between black bookends at each end, or cropping off the top and bottom of the screen.

Whether or not you think that’s a sacrifice worth making for a stylish, comfortable handset like this will vary from person to person but you’ll be unsurprised to hear that this AMOLED screen meets Samsung’s usual standards of high quality. It reaches a pretty bright 415.16cd/m2 peak brightness on manual mode, and a searing 569cd/m2 in automatic in the right conditions. On top of that, it covers 99.9% of the sRGB spectrum.

For comparison, here’s how that looks against its key competitors:

In other words, this is about as good a screen as you can get. It’s considerably brighter than last year’s model and closing in on the scores obtained by the IPS screens of the iPhone 7 and the recently released LG G6.

While the year-old S7 still pushes near the top of its class in terms of performance, Samsung has indeed stepped up to the plate with newer components that deliver a healthy kick.

It shouldn’t surprise anyone to learn that the Galaxy S8 feels incredibly fast and responsive out of the box. That’s partly because no Android handset should feel sluggish from the first boot but also because Samsung has packed the latest technology into its thin frame. It’s among the first smartphones in the world to use a 10nm manufacturing process to produce the chip – Samsung’s Exynos 8895 or Qualcomm’s Snapdragon 835 – which promises to improve efficiency and battery life as well as provide the best performance around. In Australia, we’re getting a 2.3GHz octacore Exynos 8895 processor, with 4GB RAM and 64GB storage, expandable via microSD card.

And we can say with certainty is that the Samsung Galaxy S8 is super fast. Every benchmark revealed speeds at the very top of the class, as you’d expect in a premium-priced smartphone. In the Geekbench 4 multi-core test, it smashed past the iPhone 7 and LG G6, with only the Huawei’s P10 Plus coming close.

As for graphics performance, it was a similar story. The S8 is a powerhouse for mobile games.

To be clear, these graphical tests are intense, with cheaper handsets routinely getting single-figure frame per second scores. While most 2017 handsets should handle the majority of games on the marketplace, it’s pretty clear that the S8 offers far more future-proofing than any other device we’ve seen to date.

Providing juice for all of this is a non-removable 3,000mAh battery. That’s the same size as was found in the Galaxy S7 which raises an interesting question: will it have more or less stamina? The larger screen would indicate less, but the efficiency of components would suggest more.

In the end, the answer is that’s it’s weaker, but not by much. In our battery test – which involves playing a looped 720p video with the screen set to 170cd/m2 brightness and flight mode engaged – it lasted an impressive 16 hours 45 minutes. That’s good, but it’s around an hour worse than the Galaxy S7 (17 hours and 48 minutes) and around two hours weaker than the Galaxy S7 Edge (18 hours and 42 minutes).

Next: software, camera and verdict.