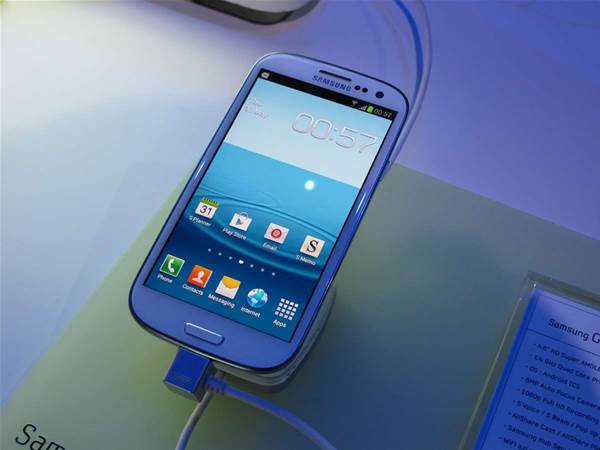 Superficially, it’s easy to see why the Galaxy S III generated such interest. The phone builds on the broad appeal of the Galaxy S II, increasing the screen size from 4.3in to 4.8in – a sizeable difference. The display is a superb Super AMOLED with a 720x1280 resolution, identical to our current A-Lister, the HTC One X. The contrast is excellent and the screen feels very bright, with animations looking clean and crisp. The screen is even fairly readable in bright light, although not great in direct sunlight.

Design
Design cues and touches have been altered as well, with the S III featuring rounded corner, a raised rather than recessed hard home button and a piano-style finish in both the white and blue versions. (We say “white and blue” but the correct terms from Samsung are “marble white and pebble blue”.)
Newsletter Signup

I have read and accept the privacy policy and terms and conditions and by submitting my email address I agree to receive the Business IT newsletter and receive special offers on behalf of Business IT, nextmedia and its valued partners. We will not share your details with third parties.
The removable back on the S III feels very flimsy and plasticy, sadly, although Samsung say it’s actually polycarbonate. Removing the rear for access to the microSD and miniSIM slots actually feels mildly fraught – as if the back might snap or chip, although it’s certainly an improvement over the S II.
The Galaxy S III measures 70 x 8.9 x 136mm – quite slim – and weighs in at 132g, putting it under the Apple iPhone 4S in terms of heft. Compared to the One X, it’s almost identical, with HTC’s model 2g lighter and 2mm shorter.
Sitting on either side of the aforementioned home button are capacitive touch buttons for the menu and back functions. It’s worth noting that these are very sensitive and more than once we found ourself backing out of apps by accident.
Performance
Inside, the S III follows the quad core crowd, packing in Samsung’s own Exynos 4 processor running at 1.4GHz. Backing this up is 1GB of RAM and a Mali-400 GPU. Storage wise there’s a 16GB and a 32GB model available locally. Putting the S III through its paces was a humbling experience. In terms of SunSpider it scored 1448.7ms, blisteringly fast compared to the One X’s 2203ms. Quadrant results too were a new record – 5481, compared to the HTC’s 4868. Gaming on the device via Temple Run, however, didn’t feel quite as smooth as we’d hoped for, although there was certainly nothing that would render the game unplayable.
Much has been made of the Galaxy S III’s hefty 2100mAh battery, and we were certainly impressed although claims that it was double the life of the One X were not backed up by our 24 hour tests. In fact, we found the two to be almost identical, with the S III having 23% left to the One X’s 21%. That said, it’s worth noting that the Galaxy has a removable battery, which the One X does not.
Camera
The S III has an 8MP rear lens as well as a front-facing camera. There’s a burst mode and a “best picture” function that will nominate what the software regards as the “best shot” from a group. Video can be taken at 1080p and the macro functions were quite impressive as well.
S Voice and Smart Stay
Samsung has made quite a big deal about some of its native software features which bear looking at. The S Voice functionality has been built upon from the previous iterations, theoretically allowing for greater voice control. In testing, we found it patchy at best, with the spoken commands to wake up the phone being hit and miss.
Smart Stay worked much better – this function will turn off the screen timeout as long as it recognises that you’re looking at it, thanks to the forward camera. Clever use of motion control will also automatically dial any contact you have open when you raise the phone to your ear. However, neither of these functions were enabled by default, causing some confusion and annoyance as to why they weren’t working until we tracked down the correct settings.
Conclusion
The Galaxy is available on all carriers and the 16GB model is available outright for $899. This puts it a little above the current price of the One X, but with the advantage of being available on plan for the major carriers.
In all, Samsung’s Galaxy S III is a truly remarkable handset, matching the built-up hype in many respects and surpassing it in others. A few niggles over the design and the perception of flimsiness to the build don’t stop us from recommending this phone.
Verdict
Can Samsung’s newest flagship Android smartphone possibly match the hype it has garnered and how does it stack against the HTC One X? Read the review.
Performance
Features & Design
Value for Money
Overall
Specs
$899 AUD 16GB
$969 AUD 32GB
(pricing info)
Copyright © PC & Tech Authority. All rights reserved.
Tags:
galaxy hardware iii review samsung iii samsung one s samsung siii s siii s3 htc
By Nic Healey
Aug 10 2012
11:29AM