Samsung Galaxy Note 10.1 reviewed: an intriguing concept, but not quite perfect The Galaxy Note 10.1 is a 10.1in Android tablet with built-in Wacom digitiser, stylus and a tweaked version of Google’s Android 4 OS. 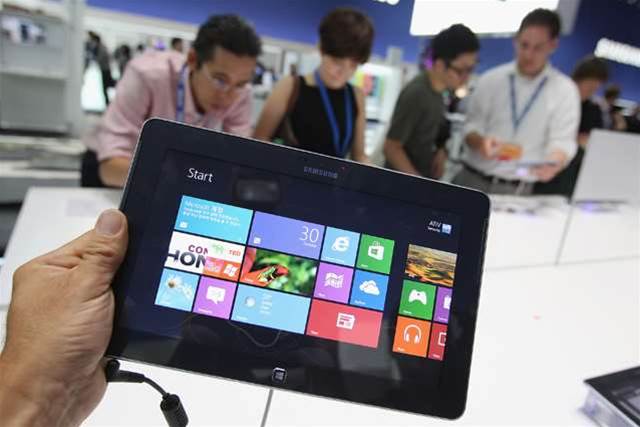 I have read and accept the privacy policy and terms and conditions and by submitting my email address I agree to receive the Business IT newsletter and receive special offers on behalf of Business IT, nextmedia and its valued partners. We will not share your details with third parties.
At a glance, the Note 10.1 looks deceptively like any other Android tablet. In fact, it’s almost identical to Samsung’s Galaxy Tab 2 10.1, right down to the chrome speaker strips on either side of the screen.
Regardless of design, the Note 10.1 lacks star quality. Set against the premium tablet competition, such as Apple’s iPad or Asus’ Transformer Pad Infinity 700, the Note 10.1’s plastic shell leaves it feeling ordinary. It also picks up smudges and marks all too easily.
Coming after the pixel-packed Full HD screens of Acer’s Iconia Tab A700 and the Transformer Pad Infinity, the Samsung’s 1280 x 800-pixel display appears mundane.
The only compensation is the quality: with a maximum brightness of 414cd/m2, a contrast ratio of 828:1, wide viewing angles and vibrant colours, it’s not bad – the only thing lacking is pixels.
The S Pen

So far, so average, but the Note 10.1’s trump card is concealed within – namely, its stylus, which Samsung has dubbed the S Pen.
Remove the S Pen from the Note’s bottom-right corner and the customised lockscreen springs into view. From here, a brush of a fingertip or the stylus sends you directly into the customised TouchWiz UI.
Yank out the stylus while the tablet is switched on, however, and a quick-launch menu springs out from the screen’s edge, providing access to the preinstalled Adobe Photoshop Touch, Polaris Office, and Samsung S Note and S Planner apps.
Sadly, it isn’t possible to customise the quick-launch menu – you’re stuck with the default apps.
It feels surprisingly natural flicking through Google’s OS with a stylus. The S Pen’s square profile and slightly rounded edges feel comfortable, and the slight give in the nib makes for a natural, pen-like feel.
The extra feeling imbued in art and painting apps is amazing, where the Wacom digitiser’s sensitivity adds a level of control that capacitive styli simply can’t match.
Samsung has also added multitasking to Android, with the Note’s multiscreen feature. This permits two applications to run side by side, and also allows for floating windowed apps, such as S Note and the Video Player, to be positioned freely.
There are limitations, of course, and the first is that this feature works only with the preinstalled Internet, Video Player, Gallery, Email and Polaris Office apps.
In practice, it’s an intriguing idea and makes it possible to simultaneously use a browser window to research topics, scribble notes in the app sitting next to it, and watch a video at the same time.
Screengrabs can be cropped, dragged into the S Note app, and annotated with a flourish of the stylus, too.
It sounds great in principle, but the flaws are all too evident. The handwriting recognition is effective, but editing mistakes is fiddly.
Backtracking requires you to dab at the strip of cursor, Space and Delete keys in the toolbar above. Scrolling around the page, meanwhile, requires you to constantly flit from scrolling mode to writing mode.
All the stopping and starting is enough to make anyone reach for a pen and piece of paper.
Performance 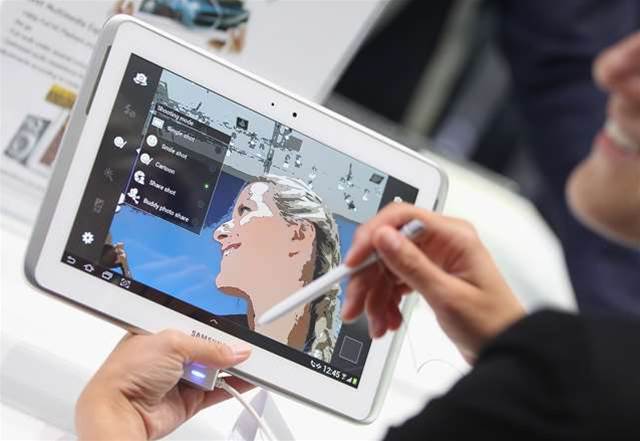 What’s more, the multitasking additions leave the Note 10.1 struggling on occasion, with menus juddering or pausing before scrolling into view. Even flicking across the Android homescreen isn’t particularly smooth, with widgets such as the email reader scrolling jerkily.
Given the hardware, this comes as a surprise. With a quad-core 1.4GHz processor and 2GB of RAM, the Note 10.1 scored ahead of the Asus Transformer Pad Infinity 700 in one benchmark.
The benchmark results were impressive but patchy real-world performance suggest that the tweaks aren’t well optimised.
Yet despite the number-crunching potential of the Exynos CPU, the Note 10.1’s 7000mAh battery life remains competitive. With the power-saving mode enabled, and screen brightness reduced to halfway, it lasted for 9hrs 19mins in our looping video test.
Conclusion
Samsung’s Galaxy Note 10.1 is a bold experiment; the concept clearly has potential.
However, the execution is wide of the mark – despite glimmers of excellence, the fiddly S Note software sours the experience.
With the right software, the Note 10.1’s appeal could be rejuvenated, but as it stands, it’s an intriguing concept that just doesn’t quite come off.
Verdict
Samsung's Galaxy Note 10.1 adds multitasking and stylus control to Android, but it isn’t quite the perfect fit
Performance
Features & Design
Value for Money
Overall
Specs
$589 AUD 16GB
(pricing info)
Copyright © Alphr, Dennis Publishing
Tags:
101 battery galaxy hardware note pen review samsung
By Sasha Muller
Nov 7 2012
3:39PM