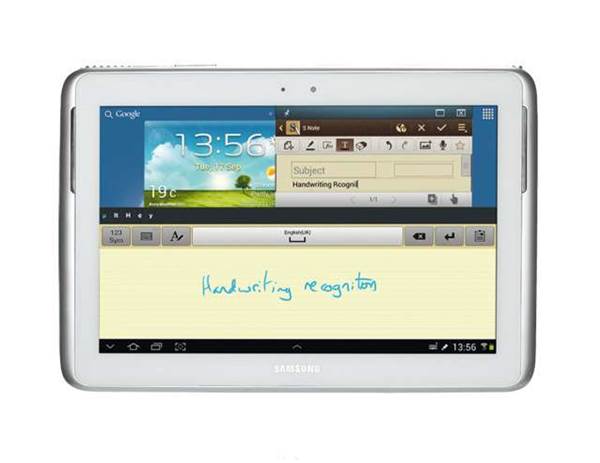 Samsung has plenty of experience as far as designing cutting-edge tablets is concerned – it built the Nexus 10 – and one of the most novel slates in its own range is the Galaxy Note 10.1. This quirky tablet bucks the trend by adding a stylus to the Android tablet formula.
The digitiser-type S Pen – which is included in the price – docks neatly into the bottom right-hand corner of the chassis. It works brilliantly, adding more accurate note-taking, drawing and handwriting recognition to Android than would otherwise be possible with your finger or a capacitive stylus.
It’s accompanied by a clutch of proprietary Samsung apps and optimisations that help you make the most of its abilities; it’s even possible to have your favourite note-taking or photo-editing app launch whenever you withdraw the stylus from its slot.
Newsletter Signup

I have read and accept the privacy policy and terms and conditions and by submitting my email address I agree to receive the Business IT newsletter and receive special offers on behalf of Business IT, nextmedia and its valued partners. We will not share your details with third parties.
On the features front, there’s plenty more to play with: there’s an infrared transmitter for remotely controlling your TV and set-top box; a microSD card slot for expanding the storage from the base 16GB (32GB and 64GB models are also available); and a pair of loud, front-facing speakers, which mean you don’t have to resort to headphones when watching videos and movies downloaded from Google Play.
Elsewhere, alas, it’s less impressive. The screen is bright, but the resolution is showing its age, with a standard 1280 x 800 delivering a distinctly grainy 149ppi. Quality is shaky, with detail lost in shadows and highlights. The tablet is physically underwhelming, too, finished in cheap-looking glossy plastic. Battery life, at 8hrs 56mins, is unexceptional, as is performance – the Note lags behind the best here.
In short, the Galaxy Note 10.1 is a decent tablet with attractive features, especially the S Pen stylus. However, we’d expect better performance and a nicer display for $500.
Verdict
Not a bad device for the money, but there’s nothing special about this budget tablet. Read the review.
Performance
Battery Life
Features & Design
Value for Money
Overall
Specs
$500 AUD
(pricing info)
Copyright © PC Pro, Dennis Publishing
Copyright © PC Authority, nextmedia
Tags:
101 galaxy hardware note samsung
By Staff Writers
Mar 7 2014
1:41PM