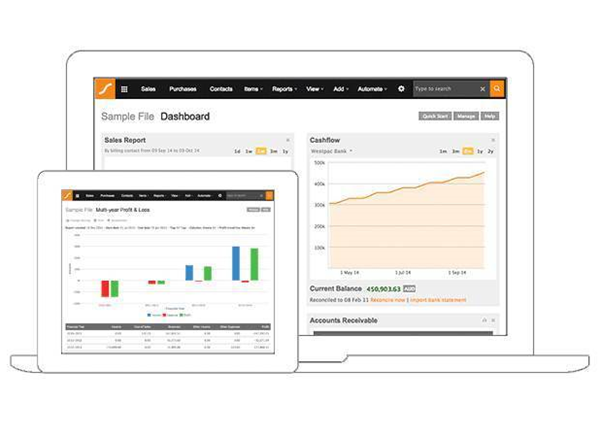 With Saasu now targeting smaller companies, we update our review of the cloud accounting system.

Perhaps one of the least well-known cloud accounting systems, Saasu doesn't seem to have the marketing budget of MYOB, QuickBooks or Xero, nor a partner network on the scale of those companies or Reckon and Sage.

However, it’s been around for some time and has some enthusiastic users (which means it must do a good job for them), and we suspect it relies largely on word of mouth.

To see if it’s right for you, here’s our original 2017 review of Saasu – part of our series on small business cloud accounting systems – followed by an update on the new features added over the past year.

Getting started and performing routine tasks are simple enough in Saasu. New invoices, contacts and so on are created via the Add menu (not via Sales, Purchases, Contacts and so on). For some reason we found this harder to get used to than the + button in Reckon One and QuickBooks, but that does indicate how much effect a seemingly minor interface design decision can have.

It's easy to enter a payment during the process of creating a sale (a definite timesaver when processing prepaid or over-the-counter transactions), and once the transaction has been saved the invoice can be printed with a couple of clicks. A setting controls whether a new sale (invoice) comes up in the item or service layout. 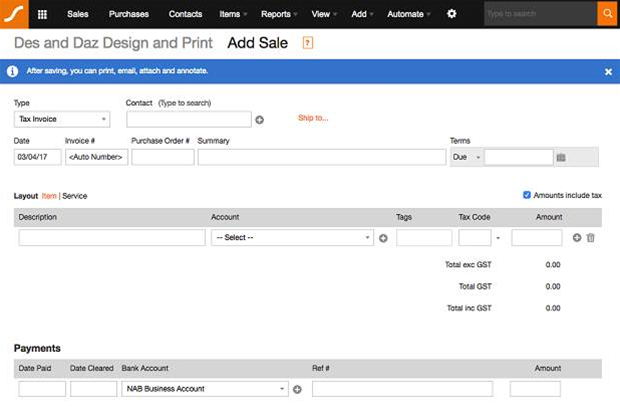 Saasu has an unusual way of handling quotes, but we feel it would work well for a lot of businesses. When you create a new sale, it defaults to an invoice but changed to a pre-quote opportunity, quote or order. It can subsequently be changed to reflect the current status of the sale.

Contacts can be created on the fly (such as while raising an invoice), but if you merely type in a name it isn't saved as part of the transaction record. What you have to do is click the + button next to the contact field and enter the details in the resulting pop-up.

We struggled more with Saasu's payroll functionality than other accounting systems that we’ve reviewed. The initial setup was made harder due to discrepancies between the software and the documentation, but also because of the extent of the setup tasks left to the user. For example, the predefined pay items include Base Pay Hourly and CDEP (Community Development Employment Projects) Salary and Wages, but if you want to pay salaried staff you'll need to manually create a Base Salary or similar item.

We recommend seeking professional assistance for setting up payroll, and it needs to come from someone with specific Saasu experience.

But once that's done, actually doing a pay run seemed as easy as with any of the competing products.

Timesheets are part of Saasu, but only for payroll purposes - there doesn't seem to be a way to use them for time tracking or billing purposes without turning to an add-on. The closest it comes is generating a report from the timesheets that shows how much you need to bill clients.

The usual collection of reports is provided. The BAS report includes item numbers, as we would expect. But selecting the balance sheet report doesn't actually generate the report – that happens when you click Run.

That probably wouldn't be necessary if report generation was faster – it took about 5 seconds to display a balance sheet for a file with just a handful of transactions. And it's not just reporting – other operations were on the slow side. If you click Print, the report is regenerated before it is printed. Some of the formats, such as that of the profit and loss report, didn't seem as clear as we're used to.

One feature worth noting is that Saasu lets you tag any (or at least almost any) item, and then restrict reports to items with particular tags. This provides a flexible way of getting information about arbitrary subsets of information such as individual projects.

Additional integrations are available via OneSaas and Zapier.

We think various aspects of Saasu's user interface would benefit from following the lead of some of its competitors.

While you can create a new contact while raising an invoice, you can't create new items at that point. That's not a stupid restriction (how can you sell something you don't stock?), but it does mean you really need to set up all your items before you start using Saasu. At least arbitrary services can be entered into an invoice. 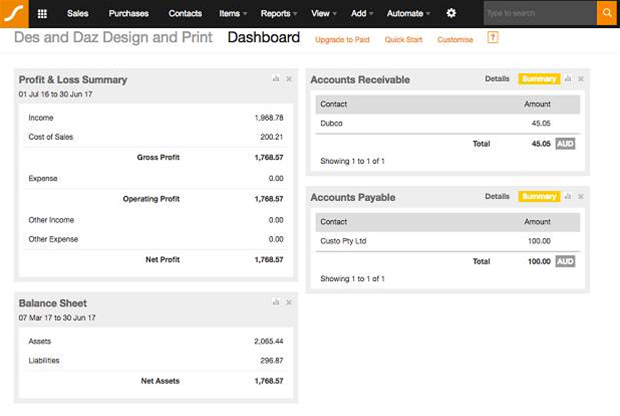 Another irritation was that when editing some items – we particularly noticed this with employee records – the Save button is near the end of the page, but you have to scroll back to the top to see if the save succeeded because that's where the status messages are displayed. It would be much more convenient if the messages could be seen without scrolling, or if the form automatically scrolled back to the top.

Saasu includes inventory, and the Stock alert report provides a link to order selected item(s) that are below their reorder level. But here (and in other places) we'd expect to see controls styled as buttons (as with Save) rather than text links. You'd get used to it over time, but it can be confusing at first.

Another issue is that clicking 'Order' creates an invoice rather than a purchase order, so you have to change that manually. Then when the goods are delivered, you show them as being received in Saasu by turning the purchase order to a tax invoice. Again, that seems odd to us, but you'd probably get used to it reasonably quickly.

Saasu provides most of the features we’d expect for a small business accounting system, and the entry-level plan is a modest $15 per month. But the limit of 1000 transactions a year restricts its applicability.

It's probably fine for consultants or freelancers who only have a few active clients, but even a small craft business selling online and at local markets could easily go past that limit – and the next tier is more than twice as expensive. The $40 plan includes up 20,000 transactions, payroll for 20 employees, inventory, and multi-currency support. Even the $70 plan limits the number of transactions (40,000) and employees (40).

At least Saasu has simplified its pricing structure, down from five tiers to three (small, medium and large), removing the two more expensive previous tiers and adding features to the three remaining plans. It’s part of Saasu’s strategy to shift its target market to smaller Australian businesses.

The main change to Saasu during the last year was the introduction of recurring credit card payments to support clients who need to repeat bill their customers.

“Many apps support online payments for their customers to bill their customers – as Saasu does – but we wanted to support the growing subscription economy and bring recurring credit card payments into the market,” said Saasu CEO Marc Lehmann. 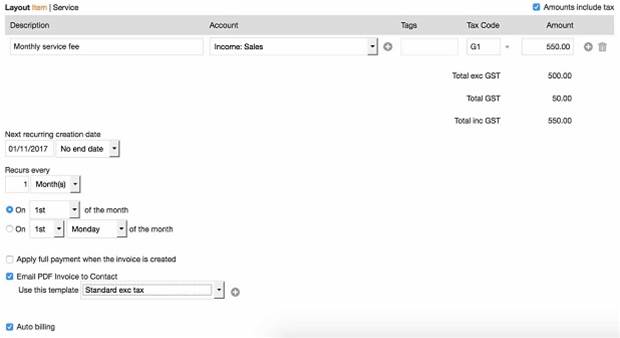 This feature helps businesses such as fitness instructors and lawn care services, as it means Saasu charges the end customer's credit card on a recurring basis. For security reasons, card details are stored by the business's payment processor, not by Saasu, which uses tokens to process individual payments.

“All the accounting is done behind the scenes and their customers can see their invoices online whenever they need to,” Lehmann said.

Another significant change was the addition of payroll for one person to Saasu's small ($15 per month) plan. Lehmann explained that this was intentionally done to disrupt Xero's lower end product, and to create more value for contractors, consultants and others who are employed by their own company and therefore need payroll for one person.

Verdict
Saasu seems particularly convenient for processing sales while the customer is waiting, and its tagging system provides great flexibility. It has a different approach to its rivals for various common tasks, and that can be either a positive or negative factor depending on your preferred way of working. It wasn't the snappiest performer, and we were surprised how difficult it was to set up the payroll function.
Overall
Specs
From $15 AUD per month
(pricing info)
• www.saasu.com
Includes quoting, invoicing, purchases, purchase orders, inventory, payment gateways, bank feeds, payroll, documents attached to transactions, mobile app, and support from 50+ add-ons.