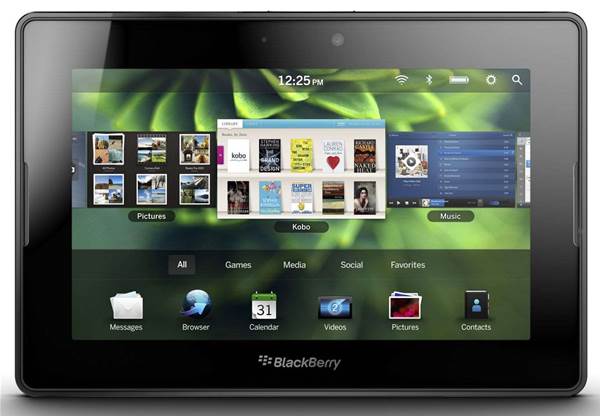 With the iPad and Android tablets grabbing all the attention, you’d be forgiven for thinking there were no other platforms on the market. This is far more than a two-horse race, however, and the latest to the starting gate is RIM’s long-awaited BlackBerry PlayBook. With a 7in screen, a thickness of only 10.4mm and weighing 425g, it won’t quite fit in a jacket pocket – but it isn’t far off. It’s nicer to hold than the Samsung Galaxy Tab, with the fine build quality you’d expect from RIM.

Inside sit a dual-core 1GHz processor, 1GB of RAM and 16GB of storage. A six-axis gyroscope handles motion sensing, and you get GPS, dual-band 802.11n Wi-Fi and Bluetooth. Initially, the PlayBook is Wi-Fi-only, with a 3G version promised further down the track.

Turn it on and the screen impresses. It’s an IPS panel, like that on the iPad 2 but with a slightly lower 1024 x 600 resolution. Impressively, though, it’s brighter: we measured a pure white screen at 600cd/m2, around 50% higher than the iPad 2. The downside is that whites look slightly yellow, and reds and blues take on what we can only describe as a slightly “off” tone. This is a minor gripe; otherwise, the display is superb.

There’s a 5-megapixel camera on the rear panel and a 3-megapixel unit up front. The main camera shoots excellent 1080p video, but stills show noticeable grain and soft focus. Battery life is good but not stellar: playing a low-resolution video on loop, the PlayBook lasted 7hrs 43mins – a long way behind the iPad 2.

However, the most interesting aspect of the PlayBook isn’t the hardware, it’s BlackBerry Tablet OS, and RIM looks to have done a very good job with it indeed.

The key is its simplicity. When you fire up the PlayBook, you get a vertically scrolling iOS-style app launch grid. You can swipe left and right to navigate categories, or drag a finger down from the top to pull down the settings. It takes a matter of moments to get to grips with.

Only when you start to fire up apps do the fireworks start. Drag a finger up from below the screen (the screen bezel is touch sensitive too) and the multitasking view appears, with thumbnails of each running app displayed in a scrollable carousel across the screen. Switching between tasks is then a simple matter of swiping to the one you want and tapping it. You can launch new apps using the app launch menu at the bottom, and end a running app with an upwards flick of a digit.

The keyboard, although small, feels wonderfully responsive, and the browser is excellent too, with support for Flash 10.1, fast load times and smooth panning and zooming. The full ABC homepage loaded in eight seconds, and the PlayBook completed the SunSpider test in two seconds. 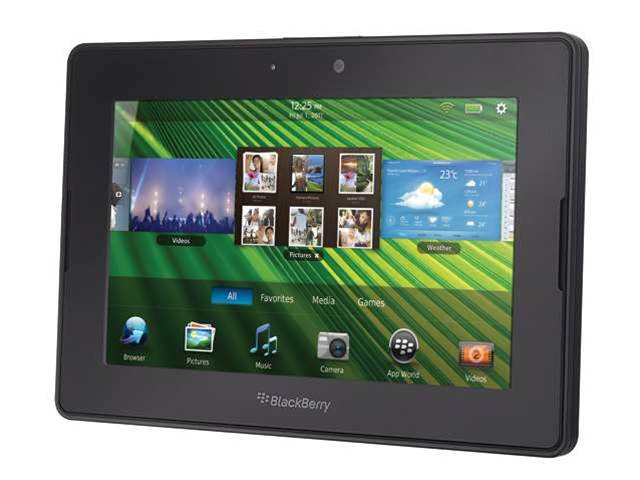 The PlayBook isn’t intended to be used as a standalone device. Its full potential can be unleashed only when it’s partnered with a BlackBerry smartphone. In fact, you currently can’t access your BlackBerry email, calendars, contacts and tasks unless you first install the Bridge software on a compatible BlackBerry smartphone and pair the two over Bluetooth. Emails and messages are then displayed, but not stored on the tablet, through apps enhanced for the larger screen. You can also tether your PlayBook to a BlackBerry and use its 3G connection.

To many users, particularly security-conscious corporates, bridging will make a lot of sense; having email and sensitive data stored only on one device makes it easier to manage and secure in the event of loss or theft. But the need for the Bridge connection will restrict its wider appeal. Native BlackBerry apps are due in a future software update, but RIM has given no firm timescale as to when.

It’s a similar situation with third-party apps. The numbers are thin right now, but there’s potential for growth, as RIM has built compatibility with Android apps into Tablet OS. After repackaging their apps and submitting them to RIM, developers can have them hosted on BlackBerry App World too. None were available at the time of review, however.

Its fabulous screen, superb UI and performance, and a compact, lightweight form factor mean the PlayBook has serious potential. Its business focus means it may not appeal to consumers, but with a reasonable price, we can see RIM becoming a successful part of the tablet landscape.