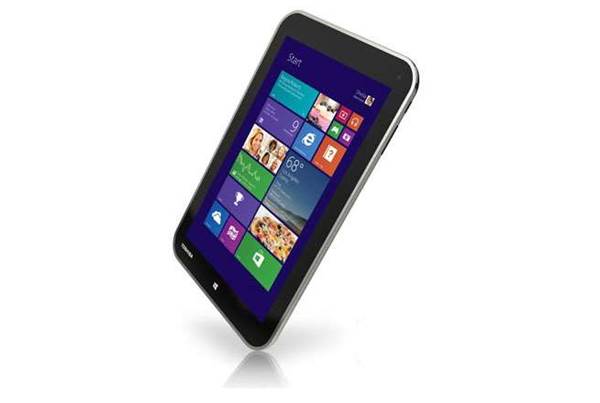 The Toshiba Encore marks the company’s first foray into the Windows 8 compact-tablet market and, on paper at least, it gets off to a strong start. The Encore comes with Windows 8.1, a Bay Trail Atom processor and Microsoft Office Home & Student 2013 thrown in for good measure, too.
Better yet, at only $399 or so, it’s significantly cheaper than the two other Windows 8 tablets we’ve reviewed recently – the $450 Acer Iconia W4 and $450 Asus VivoTab Note 8 .
This lower price is reflected in the build: the Encore isn’t the slightest compact tablet we’ve seen and, at 455g, it’s heavier than its rivals. It’s also a touch chunky, at 11mm thick. However, as befits its comparative heft, the Encore is robust. Twist it, and there’s hardly any creak or bend.
Newsletter Signup

I have read and accept the privacy policy and terms and conditions and by submitting my email address I agree to receive the Business IT newsletter and receive special offers on behalf of Business IT, nextmedia and its valued partners. We will not share your details with third parties.
It’s easy on the eyes, too: the plastic back panel has a metal-effect finish, and curves softly up at the edges to sit snugly in your hand. The rear panel is slightly textured for a better grip. The bezels surrounding the screen aren’t distractingly broad, and the whole thing is set off rather nicely by the silver capacitive Windows button below the screen. We could do without the distracting Toshiba logo on the left-hand side, though.
Scattered around the edges, the Encore’s selection of ports are in line with what we’d expect from a compact tablet: there are micro-USB and micro-HDMI ports, and a 3.5mm audio jack on the top edge, plus a microSD slot on the left for adding to the 32GB of internal storage. Wireless connectivity comprises dual-band 802.11n and Bluetooth 4, but there’s no NFC, 3G or 4G.
Underneath its attractive exterior is a 1.33GHz Intel Atom Z3740 processor, supported by 2GB of RAM. This setup managed a performance slightly slower than that of the Iconia W4 and the Asus VivoTab Note 8 in our Real World Benchmarks, netting an Overall score of 0.36; its rivals achieved 0.41 and 0.35 respectively. Its browsing speed impressed us, however, recording a SunSpider time of 456ms.
The tablet’s two-cell lithium-ion battery didn’t disappoint, either. In our light-use battery test, with the screen set to 75cd/m², the Encore managed 9hrs 26mins, not quite up to the VivoTab Note 8’s time of 11hrs 29mins and the Iconia W4’s 12hrs 5mins, but good enough to keep the Encore powering through the day.
The Encore has an 800 x 1,280 HFFS screen, which is about on par with those of the VivoTab Note 8 and the Iconia W4. Brightness peaks at 314cd/m², which is just enough to ensure the Encore remains readable under harsh overhead light or outside on a bright day. The contrast ratio of 803:1 is a little lower than that of the Iconia W4’s 1,030:1 and the VivoTab Note 8’s 1,094:1, but it’s still enough to lend images a good dose of dynamism. If we had any gripes, they would be that the colours don’t fully cover the sRGB gamut, leading to slightly orangey reds and yellowish greens, and that there’s a tendency to crush darker greys into blacks.
The touchscreen is perfectly responsive, and swiping through Windows Store apps and navigating Windows 8.1’s tile-based Start menu feels natural and fluid. However, using the Encore in desktop mode is tricky, thanks to the comparatively high pixel density and the small screen, meaning that icons and error messages are extremely small. There’s no stylus included, either, which goes some way to explain the price difference of around $50 between this model and the VivoTab Note 8, which does come with a stylus.
Stylus or no stylus, however, the Toshiba Encore is still significantly cheaper than both its main rivals, matches both for performance, and packs in connectivity to turn it into a lightweight mobile workhorse. With a full copy of Office Home & Student 2013 onboard as well, it’s a bona fide bargain.
Verdict
A great software bundle and low price makes the Toshiba Encore the first compact Windows 8 tablet we’d consider. Read the review.
Performance
Features & Design
Value for Money
Overall
Specs
$399 AUD
(pricing info)
Copyright © PC Pro, Dennis Publishing
Copyright © PC Authority, nextmedia
Tags:
encore hardware review toshiba
By Bobby McPherson
Jun 18 2014
2:24PM