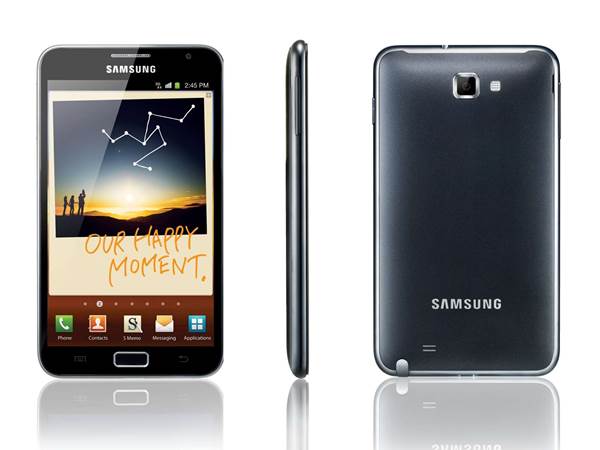 Big, and definitely beautiful – the Samsung Galaxy Note pushes the smartphone in terms of size and functionality. Here is our review.

“If you see a stylus, they blew it.” Thus spake Steven Paul Jobs, proving that the man was actually fallible, despite what Apple fans think. Samsung’s Galaxy Note not only packs a stylus, but also a host of features that make it an excellent smartphone.

Let’s get the elephant in the room out of the way: this phone is enormous. With a 5.3in screen, it dwarfs even the Sensation XL. In the course of reviewing we constantly received “hilarious” comments about the size of the Note. But it’s worth noting (no pun intended) that it’s only 15g heavier than the HTC Sensation XL and actually only 0.4mm thicker than the iPhone 4S.

It’s this size that has sparked the debate that the Note owes more to the tablet than the phone, or that it’s some sort of hybrid of the two. Here at PC&TA we quickly rejected distasteful portmanteaus such as “phablet”, instead merely regarding the Note a powerful smartphone with a big screen. And it’s a hell of screen – size aside, the HD Super AMOLED is stunning with a resolution of 1200x800 and is protected thanks to Corning’s Gorilla Glass. We found video playback to be excellent, with the screen size actually making this a very nice device for media consumption.

The Galaxy Note with Stylus

Aside from the size, the other defining feature of the Note is the stylus and the array of pen-based apps that Samsung are providing. The Stylus has a small button on the side and sits flush in the bottom of the Note. Using the stylus you can make notes, scribble on pictures, use a simple photo editing program – quite a range of applications. It’s also how you take a screen shot – holding the button down and pressing on the screen will do a screen grab and open the image up immediately for editing and sharing. This is great for things like annotating maps or web grabs.

The Note is quite a powerhouse of a device, with a dual-core 1.4GHz processor and 1GB of RAM. Browsing feels smooth and we were extremely impressed by video playback as well – quite crisp, and the screen makes it a viable size for viewing. In terms of benchmarking, the Note scored 3586 in Quadrant and an impressive 3093ms in Sunspider, and a remarkable 6.6 secs in our HTML page load tests. We even found the camera to be crisp, with an excellent macro function and a great range of options including shake reduction.

We were blown away by the battery life, with well over half the charge remaining after our 24 hour test. In casual use we found the Note to outlast other phones by a considerable amount, despite the power being used by the screen and CPU. Some of this is the sheer size of the battery - Samsung’s decision to put a 2500mAh battery is noticeable. Of course, the size of the device naturally allows for a bigger battery, but for anyone who worries about the state of smartphone battery life, the Note has more than enough power to share.

The Note may not fit as comfortably into a pants pocket as some other phones and users with smaller hands might find one-handed use all but impossible. But the big screen, processing power, pen-based apps and battery life make this a device that most users should find a lot to love about.