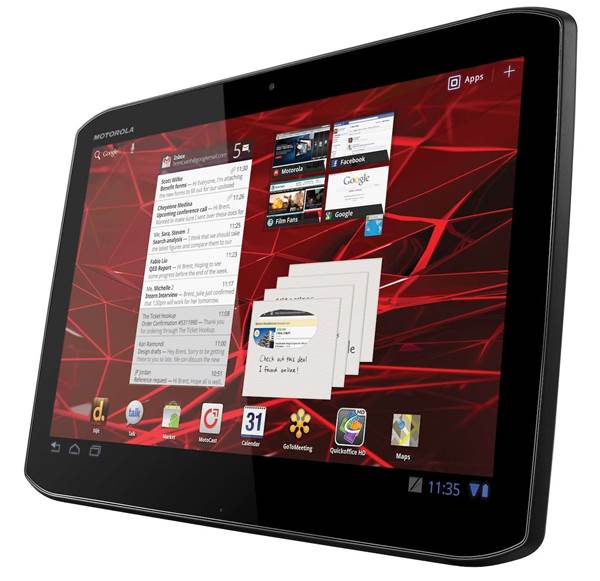 The original Motorola Xoom (read our review of the original Motorola Xoom here) was the first of the Android tablets, and had to bear the huge expectations of a fledgling industry. Alas, when it finally arrived, it just couldn’t live up to the hype. If anything, the rush to be first was its undoing, as several more-polished Android tablets bettered it only weeks later. So Motorola has taken its time to follow up the Xoom with a thinner, lighter sequel, and that patience looks to have paid dividends.

Design
The Xoom 2 is only 8.8mm thick and weighs 599g – both almost identical to the iPad 2 – and its corners are angled gently downwards, both to stop them digging into your palms and to give the tablet a very slight octagonal shape. It’s a distinctive look that won widespread approval in the PC&TA office; in a neat touch, the packaging has its corners chopped off to match.

The rear is made of grey aluminium in the centre, but with rubberised grip areas at either side and along the bottom, so it’s comfortable to hold. The only buttons are concealed round the back, just where your right-hand fingertips are likely to rest. It isn’t too bad once you’re used to it, but changing the volume or waking the Xoom 2 from sleep can be awkward as you grope blindly for the right button.

Display
Still, it keeps the front clean and leaves the 10.1in display to soak up all the attention. It’s a 1280 x 800 LCD with a bright and crisp picture that leaps out at you. We measured the maximum brightness at 478cd/m2. Combine that with a decent 800:1 contrast ratio and it’s among the better tablet screens we’ve used. Its colours don’t quite have the vibrancy of the iPad 2 or Samsung Galaxy Tab 10.1, but viewed alone it’s perfectly good.

There’s a 1.3-megapixel webcam above the screen, and a 5-megapixel camera around the back that can also capture 720p video. Using Honeycomb’s camera app we took a range of test shots and videos, and the results were generally good. It captured plenty of detail in a variety of lighting conditions, although shots were a bit washed out and colours lacked punch. There’s also no tap-to-focus, which is irritating with close-up shots.

Features
The Xoom’s internals are impressive. It has a 1.2GHz Nvidia Tegra 2 chip and 1GB of RAM, but we were a little put off by the Xoom 2’s initial sluggishness in menus. After a few hours to bed in, though, the juddering vanished, leaving a very capable tablet. It handled the most demanding games we threw at it without a hitch, including the cutting-edge Shadowgun, and raced through the Android benchmarks: it scored a healthy 1779 in the Quadrant test, and took 1931ms to complete the SunSpider JavaScript benchmark, both of which are among the fastest we’ve seen.

Motorola has squeezed an impressive battery inside that svelte chassis. We set it running our usual tablet benchmark – medium brightness and a video running on loop – and the Xoom 2 lasted for 10hrs 54mins. It can’t match the ludicrous stamina of an iPad 2, and it’s disappointingly down from the 12hrs 49mins of the original Xoom, but it’s still longer than any other Android tablet we’ve tested.

Although we’re all eagerly awaiting Ice Cream Sandwich, the Xoom 2 is still on Android 3.2, but it’s among the first tablets to benefit from Google’s new tiled Android Market interface. It’s a vast improvement, with plenty of room for staff and editors’ recommendations, and the ability to properly promote new and popular apps in a way that looks far more modern than before.

Apps
As for bundled software, you get a link to an app called Dijit, which works in conjunction with the discreet IR emitter on the top edge to control TVs and other living room equipment. The setup is similar to that on Sony’s Tablet S. There’s also a micro-HDMI output on the bottom to hook up a TV directly. Motorola’s MotoCast app lets you easily stream media from a PC, and if you’re after a tablet for business use, Motorola has also included Citrix Receiver and GoToMeeting. There’s even an optional stylus for jotting down quick notes and sketches.

Price
We reviewed the 32GB 3G version, which was a Telstra exclusive at the time of writing. Plans for the device started at $29/month with 1GB/month of data and an overall cost of $1176 over the 24 month contract. Telstra's 1GB per month plan for the 32GB variant of the new iPad cones to $1248 opver the 24 months by contrast. The microSD and SIM slots under a flap on the bottom edge – you can bump up by 32GB on the microSD and the SIM is the now standard MicroSIM. And the Xoom 2 outright price is great – $70 less expensive than a similarly priced version of the new iPad at the time of writing.

Conclusion
That leaves us in a quandary. This is undeniably the most physically desirable Android tablet we’ve used, but is it a better all-round choice than the excellent Samsung Galaxy Tab 10.1? It’s a very close call, but with similar prices, we’d argue the faster internals, superb ergonomics and IR emitter just about make the Xoom 2 the better buy.

It’s early days for quad-core in tablets, so right now there isn’t much software to take full advantage of its added power, but there’s no denying tablet performance is racing forward at a pace, and dual-core suddenly sounds less cutting-edge. However, unless you desperately need that cutting edge (or a new iPad), Motorola’s “new” baby remains a very tempting device.