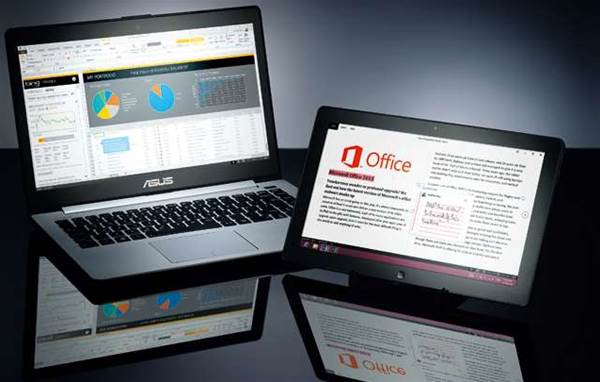 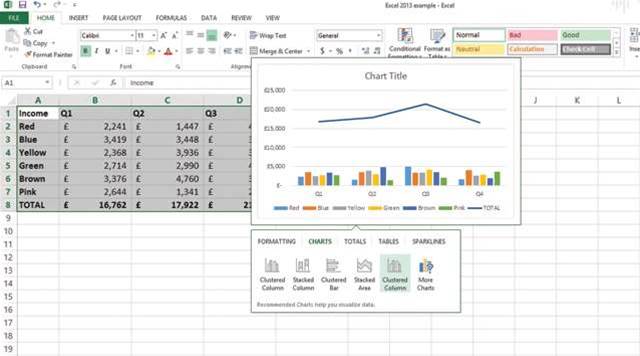 Verdict: Enhanced usability makes Excel’s superb data analysis accessible to all
There are good reasons why Excel is the world’s dominant spreadsheet tool, with each successive version of the program adding extra power and more features. The problem has always been that most average users would only skirt around the edges of what it could do. For 90% of people, Excel is simply somewhere to create lists and tot up figures.
With Excel 2013, Microsoft has made considerable leaps to break this deadlock. Its number one tactic has been to find the most powerful options and thrust them in front of users, rather than expecting them to stumble upon them via the ribbon.
Let’s say you select a range of data in your spreadsheet. Previously, you’d have to head to the ribbon to work out what to do with it – perhaps take advantage of the conditional formatting introduced in Excel 2007, or insert a chart. Now you select it and a button appears at the bottom right; click it and all the most obvious options appear.
These comprise formatting, adding charts, using formulae to calculate totals, and even tapping into the Sparklines feature (where a summary graph of your data appears in the cells adjacent to each row).
Excel 2013 will evaluate your data and suggest the right chart – and the recommendations are usually correct. Even if it isn’t exactly what you want, as soon as you’ve created the chart, the ribbon changes so you can start tweaking right away.
This kind of feature is important, since data analysis is about far more than number crunching: you have to gain meaning from the data. A good graph can achieve this, and so can a number of other features that Excel 2013 brings to the fore.
Chief among these is PivotTables. Immensely powerful in the right hands, PivotTables provide an excellent way to analyse a scrambled mass of data.
Imagine you have all the sales results for all your regions across the past eight quarters – a PivotTable allows you to strip out unnecessary data so you can focus on the area that’s of interest to you at that moment. It’s a great tool, which until now has never been that accessible. Excel 2013 makes it easier to get to grips with, recommending PivotTables based on the data at hand.
Slicers is another useful tool for making sense of data. In Excel 2010, it allowed you to show a slice of your data in a PivotTable with the click of a button. In Excel 2013, you don’t need to create a PivotTable to use it.
To illustrate this, imagine you geekily create a Christmas list in Excel. One column is the product name, the next the product type (such as book or DVD), the next the price, and the next the product’s desirability score out of ten. Position your cursor anywhere in the data and format it as a table. Then insert Slicers (found in the Table Tools Design tab) for each of those column headings. Viewers of your sheet can then jump to the relevant product type, price or level of desire, without fiddling with the table itself.
Then there are the new Apps for Office, which allow users to quickly add extra features via an online store. Apps are currently thin on the ground, but the Bing Maps tool shows what can be done, taking a list of locations and plotting them on a map for you.
It’s worth noting that you can share spreadsheets online via the Excel Web App by saving your work to a SkyDrive account and then clicking on Share. You can then invite people to take a look at them, send out a link (either for viewing or editing), or post them on Twitter and LinkedIn. All the Slicers you created are there too.
Annoyingly, it’s only by saving your spreadsheet to SkyDrive or SharePoint that two people can simultaneously work on a sheet. Even more annoyingly, you can’t work in Excel 2013 while someone else edits in the app – you both need to move to the Web App. This is in contrast to PowerPoint and Word, which both allow simultaneous collaboration in the desktop app.
Nevertheless, we do recommend Excel 2013. While there are no major new features for power users, those less familiar with the program should benefit from the additions. Plus, there’s the fact that Excel now launches files in their own windows rather than as tabs in the same window, a welcome change indeed.
Let’s not forget that Excel 2010, and Excel 2007 before it, were already excellent programs. Excel 2013 moves them a little further into the mainstream.
Click below for the next page...
Microsoft Office 2013
Previous PageNext Page
1 2 3 4 5 6 Single page