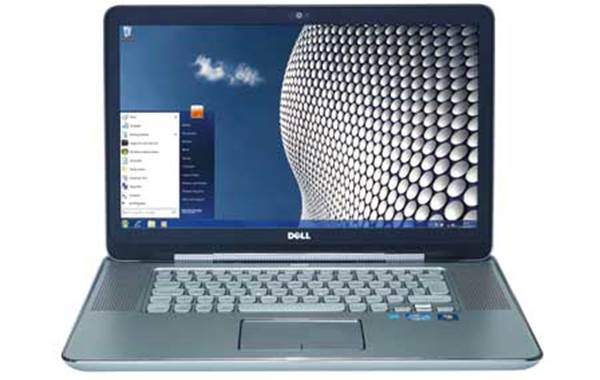 As if Dell’s XPS 15 weren’t desirable enough already, it’s now joined by the sporty 15z. As well as upgraded internals, the whole design has received a bit of spit and polish to bring it up to luxury standards.
Dell has done a fantastic job sprucing up the curves of the 15in frame, with a lovely silver coating on the lid, a spiral-finished hinge and a muted grey interior. Add some neat flourishes, such as the large speaker grilles either side of the keyboard, and a silver trim around the edges, and you have a laptop that’s unusually stylish for its size. The Full HD screen makes it necessarily wide, but at 26mm it isn’t too thick.
Newsletter Signup

I have read and accept the privacy policy and terms and conditions and by submitting my email address I agree to receive the Business IT newsletter and receive special offers on behalf of Business IT, nextmedia and its valued partners. We will not share your details with third parties.
Keyboard and touchpad
The keyboard adds to the luxury feel. First, there’s the shape of the keys, all rounded edges with a slightly concave surface. Then there’s the letters and symbols adorning them, which have a futuristic look. Finally, there’s the size: although this isn’t a full-width keyboard, large gaps between rows mean it’s well suited to large hands.
The touchpad is huge, too, and thankfully Dell has decided not to roughen it up, instead choosing a nice smooth finish that doesn’t become clammy too quickly. The deep-travel buttons could perhaps give a little more click feedback than they do, but on the whole it adds up to a comfortable laptop to use on a desk. It’s just a shame that its size and 2.6kg weight make it less comfortable to use on a lap.

The Dell XPS 15z: A style standout
Performance
The 15z isn’t only about design: it also offers a great deal of computing power. It comes with a dual-core 2.7GHz Core i7-2620M and 8GB of DDR3 RAM, which pushed it to an overall score of 0.73 in our application benchmarks – not far off the sort of score you’d expect from a top-end, quad-core laptop. Graphics are handled by a switchable Nvidia GeForce GT 525M GPU. This isn’t a powerhouse, but it’s perfectly capable of a little gaming: the XPS 15z managed a respectable 45fps in our Low quality Crysis test and 23fps at Medium. Lower a few settings and you might squeeze a playable frame rate at the screen’s native Full HD resolution.
And whether you’re playing games or browsing the web, the Dell’s screen is one of its biggest strengths. From the moment you power up the XPS 15z it’s obvious that this is a superior white LED backlit panel, so bright is its desktop background. At times colours can be oversaturated, but that’s preferable to a washed-out display. We measured a maximum brightness of 316cd/m2 and a contrast ratio of 510:1, and our test photos and videos looked excellent.
Battery Life
The XPS 15z impressed us with its battery life too. The battery is non-removable, something we’re seeing more and more these days, but the system ticked along for 6hrs 13mins in our light-use test, a good hour or two more than we were expecting. That was using Intel’s built-in HD Graphics 3000: switching to our heavy-use test caused the Nvidia GPU to kick in, pulling battery life down to a worst-case scenario of 1hr 16mins.
Other features
There’s no Blu-ray drive, which is disappointing, and while the speakers are loud and clear, they don’t offer anything notable at the bass end. As an entertainment laptop, it’s functional rather than outstanding.
But with a 750GB hard disk, dual-band 802.11n Wi-Fi, two USB 3 ports and both HDMI and DisplayPort outputs, there are few serious negatives we can throw at the Dell XPS 15z. The only slight dent in its appeal is the $1699 price, which is rather a lot for a mainstream laptop these days. If you don’t mind sacrificing a little power, both on the processor and the graphics, the $1399 Core i5 version is an attractive alternative.
Conclusion
Even at full price, the XPS 15z is a wonderfully well-rounded laptop. It’s powerful and long-lasting with no small amount of style, and that all-round balance makes it hard to top. Dell looks to have another winner on its hands.
Verdict
The Dell XPS 15z has plenty of power, plus style and battery life that makes it a surprisingly strong all-rounder. Read our review
Performance
Features & Design
Value for Money
Overall
Specs
$1699 AUD
(pricing info)
Copyright © Alphr, Dennis Publishing
Tags:
15z dell hardware laptop mobilecomputing review xps
By David Bayon
Sep 30 2011
5:06PM