Review: Acer's Aspire S7, a laptop with a touchscreen 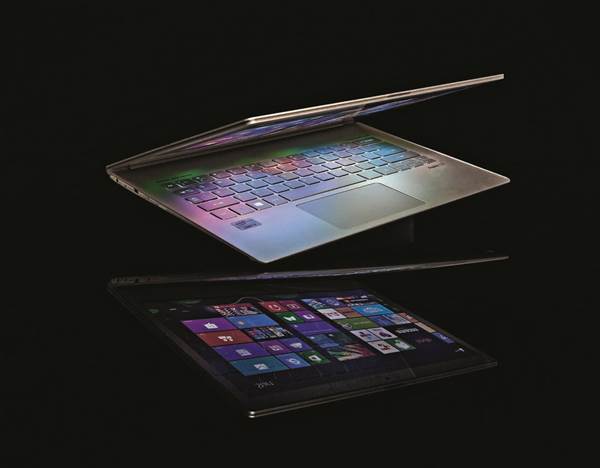 It is a truly luxurious product, with great attention to engineering detail as well as great integration with Windows 8.

We were quite impressed by Acer’s first steps into the ultrabook world – its S3 model differentiated itself from the masses by making sensible compromises (such as the use of a mechanical hard drive) and hence kept its pricetag lower than the competitors.

The new S7 is a very different beast, melding a variety of interesting technologies to create a stylish flagship for its Windows 8 push.

The outer shell of the S7 is built from a combination of aluminium, polycarbonate and Gorilla glass, resulting in an impossibly thin and light design.

Unlike HP’s Envy Spectre, which used a veneer of Gorilla glass over metal, Acer has constructed the lid entirely from the material, held in place by an aluminium frame and lined with a white inner coating keeping the screen electronics hidden.

This not only helps to reduce the size of the S7, but also provides for a remarkably tough exterior, remaining intact despite our repeated attempts to scratch and chip it.

Acer has also managed to keep the S7 light by using a white polycarbonate outer shell for the base of the S7.

The keyboard area is made of aluminium, moulded in such a way as to form a tight seal with the lid when it closes.

Not only does this minimise the amount of dust collecting on the inside of the S7 when closed, but it helps ensure that the S7 remains thin and feels robust when closed.

While the S7 design is certainly one of the more striking examples of ultrabook design to date, it is the little touches added because of Windows 8 that makes it standout.

The first is the inclusion of a 10 point multitouch digitiser, which is incorporated into a 1920 x 1080 IPS screen.

The use of IPS over traditional TN screens is important for touch-enabled Windows 8 devices, as manufacturers can no longer assume users will be sitting directly in front of the screen when using their devices, and in turn this means that good vertical viewing angles are more important than ever before (TN panels traditionally have pretty limited vertical viewing angles).

Further to this choice of screen, Acer has implemented a ‘dual torque’ hinge on the S7. This means that the screen opens slickly, with little resistance, until it reaches an angle of around 110 degrees.

At this point the resistance of the hinge increases, allowing you to open the screen further by applying increased pressure, but also stopping the screen from moving backwards when using its touch features.

While we still aren’t sold on a touchscreen ultrabook being anything more than a gimmick, the touch experience in Windows 8 is light years ahead of the frustratingly imprecise touch features of Windows 7.

Even though the 1920 x 1080 screen on the S7 makes the icons and toolbar on the Windows desktop seem tiny, even this reviewer’s fat fingers were able to consistently hit even the most miniscule of targets.

Of course, there are few circumstances where you’ll actually want to use touch when working on the desktop.

Where it really comes into its own is on the ‘modern UI’ (Microsoft’s sudden retraction of the years-old ‘metro’ name is still driving us nuts). We found that we were tending to use touch a lot more on this screen, largely for convenience’s sake.

When you aren’t revelling in the touchscreen novelty, the keyboard and trackpad on the S7 work admirably.

The keyboard has very little travel in it, which is a side effect of the thickness of the S7 – that said, we found typing to be much more pleasant than we expected.

The touchpad worked well with Windows 8 multitouch gestures, and thankfully has clicky bottom corners that double as left and right mouse buttons.

Speaking of the modern UI, it has been amazing to see just how the sleek and slick design that we are used to in Windows 8 is marred by the inclusion of ‘bundled’ software packages.

Acer has loaded down the interface with a bunch of apps – don’t think that the shift in Windows interface design is going stop that particularly annoying habit of PC manufacturers.

It doesn’t take long to expunge the modern UI screen of these icons, and some preinstalled Apps were ones we would install anyways (like Evernote and Minesweeper).

But it still frustrates the heck out of us that this practice continues, and it is doubly annoying that in desktop mode the taskbar (which is core to not driving oneself insane when using the desktop in Windows 8) comes with shortcuts to the Amazon and Ebay websites in pride of place.

Under the hood of the S7 sits an Intel Core i7-3517U CPU, with 4GB of RAM and an SSD with 106GB of formatted space. Expandability comes via two USB 3 ports and an SD/MMC reader on the right side of the chassis. On the left side sits mini-HDMI and a headphone jack. Network connectivity comes via integrated 802.11a/b/g/n and an included USB to Gigabit Ethernet adapter.

This makes for a rounded, if tiny, feature set. Due to the tightly integrated design of the S7 it isn’t configurable, and the choice of a relatively small SSD is somewhat disappointing.

When it comes to performance we saw the S7 achieve a benchmark score slightly behind the Asus' Zenbook UX31A (which uses the same CPU and 1080p screen, but runs Windows 7).

We were somewhat disappointed by the battery life results, however.

The S7 managed a heavy use result of 1.36, which was virtually identical to that achieved by the UX31A.

However, its light use result of five hours and 36 minutes was incredibly underwhelming, especially when compared to the UX31A, which endured for a touch over nine hours.

With the S7, Acer has delivered a wonderful Windows 8 ultrabook design, even if it didn’t quite manage to deliver the battery life we expected.

It is a truly luxurious product, with great attention to engineering detail as well as great integration with Windows 8.

The price tag is high, but comparable to similar devices like the Zenbook UX31A.

Ultimately, though, we do wonder whether the traditional ultrabook design will work against the S7.
There are a myriad other products coming out that blur the line between laptop and tablet, and one can’t help but think that these will make for more compelling purchases.

After all, if you can use your laptop as a tablet as well, why would you settle for a traditional laptop with touch features?