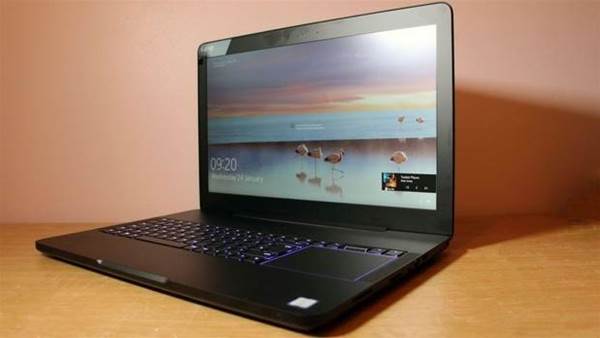 For those who don’t want a low-powered ultraportable, here’s a welcome alternative.

Business laptops never look this good, but the Razer Blade Pro is a unique machine. It’s dark and svelte – despite the huge 17.3in screen – and it’s built to address the dual demands of work and play.

Razer has taken some bold decisions with its keyboard and trackpad on this machine, changing their positions to reflect how people use PCs – and it’s packed the Blade Pro with powerful components, too.

There's no denying how attractive this machine is. The body is built from black machined aluminium, and it's finished with Razer's familiar green touches. The perfectly balanced lid eases open to reveal no unsightly logos – just a small, smart power button and Razer's interesting ergonomic choices.

The Blade Pro is a 17.3in machine, so it occupies plenty of space, but it's relatively slim and light compared to most other 17.3in machines – its body is just 23mm thin, and it weighs just over 3kg. Dell's larger Precision laptops are almost half a kilo heavier and about a centimetre wider, for instance. 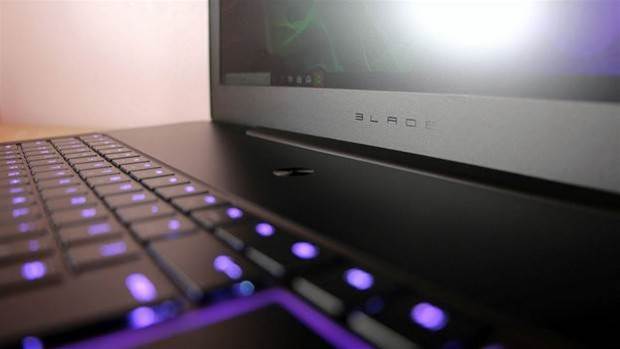 The Razer's machined aluminium means build quality is exceptional – although we'd still use a sleeve to protect the metal from scuffs and scrapes.

The aluminium brings to mind the MacBook Pro – which is a comparable business-class machine and a superb device in its own right – despite the Blade's larger screen. Both offer comparable design and strength, although the MacBook is slimmer and lighter.

The Razer serves up a HDMI and a Thunderbolt 3 port alongside three USB 3.1 Type-A connectors, a card reader and one audio jack. That's significantly more versatile than the MacBook, which only has Thunderbolt ports.

We're used to laptops with a trackpad below the keyboard, but the Blade Pro goes in a different direction – horizontally.

The keyboard still occupies most of the Blade's width, but the trackpad sits on the right-hand side. It's a large pad ringed with RGB LED illumination, and a scroll-wheel above is flanked by media buttons.

At first, it's undeniably strange. We kept dragging our fingers to the more traditional trackpad location below the keyboard, and the keyboard itself is shifted to the left – so we kept missing those buttons, too.

Spend time with the Blade, though, and the layout becomes familiar. The trackpad's position mirrors how most people use a mouse at a desk. The pad is also larger than most trackpads, and the presence of a scroll-wheel makes it easier to work, too.

The keyboard's buttons are still large enough for rapid typing. They have impressive speed, a solid base and enough travel – all attributes that make the Blade's keyboard a boon for productivity. 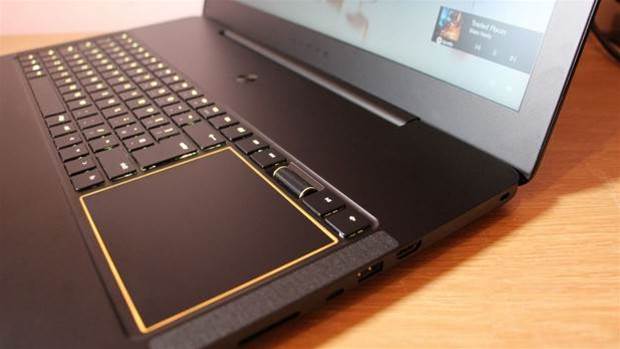 It's certainly different from the latest MacBook keyboard, which has hardly any travel and requires a light touch. If you want a more traditional feel beneath the finger for hammering out long documents, then the Razer's unit will deliver more satisfaction.

Blade Pro’s high-end models feature a 4K touchscreen display, but the base model reviewed here has a Full HD IPS (non-touchscreen) panel with a matte finish. It's got a 120Hz refresh rate which can be used to deliver smoother scrolling and slicker navigation.

The screen delivered solid benchmarks in most tests. Its brightness measurement of 372cd/m2 is good, and that's paired with a black level of 0.24cd/m2 – a good result that creates dark areas that look suitably inky and distinct.

The Razer's contrast ratio of 1,550:1 is fantastic. Images pop off the panel, and there's plenty of vibrancy at every part of the scale. It's easy to pick apart subtly different shades, too.

The screen's colour temperature of 6,763K is good, and the screen's Gamma measurement of 2.12 is fine.

The Razer's panel only faltered in a couple of areas. Its average Delta E of 4.7 is just that – average – while it could only display 86.2% of the sRGB colour gamut.

Those issues mean the Razer isn't quite up to the most sensitive photo and design tasks, but it'll handle almost all work applications – including most photo and video editing – with ease.

It's undoubtedly a good display, but the latest MacBook Pro goes one better. The 15in model has a 2,880 x 1,800-pixel resolution that offers more sharpness than the Blade Pro. It also has better colours and a better bright point, and it's arguably more useful for professional users as it adheres to the DCI-P3 colour gamut.

Next: performance and verdict

The stellar design and good screen are partnered with high-powered components. The higher-end models feature an Intel Core i7-7820HK processor overclocked to up 4.3GHz, 32GB of 2667MHz DDR4 memory, and a selection of dual PCIe SSDs set up in RAID 0 configuration. No question, that thing would fly.

However, the base model reviewed here is no slouch either, offering 16GB of RAM, a 256GB PCIe SSD and a 2TB hard disk, and an Intel Core i7-7700HQ. The latter is now a last-generation processor, but it remains powerful: it's got four hyper-threaded cores, and its 2.8GHz stock speed reaches 3.8GHz with Turbo boost.

The Core i7-7700HQ delivered a blazing score of 126 in our benchmarks, with consistent results across image editing and multi-tasking – proof that this chip is adept with single-threaded software and multi-threaded tools. It's well ahead of every other laptop we've tested. 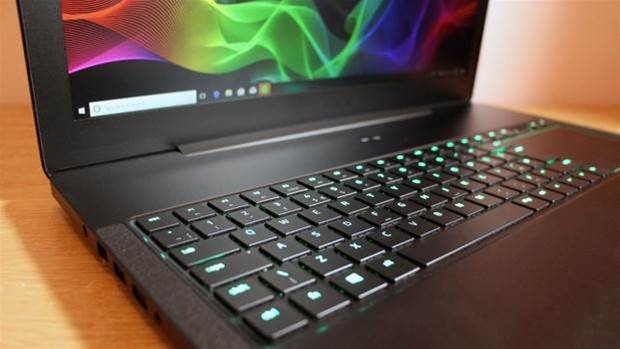 The Razer's Geekbench single- and multi-core results of 4,147 and 13,269 further bolster its work credentials. The only way you're getting much more CPU performance from a laptop is by using a machine with an overclocked or a desktop processor – and those rigs are more expensive and much heavier than the Blade.

The Razer does fall a little behind in SSD speeds. Its results of 1,573MB/sec and 978MB/sec are good – but the Apple's PCIe storage is faster.

Graphical grunt in the higher-end models comes from an Nvidia GeForce GTX 1080 with 8GB of memory. The base Full HD model offers a GeForce GTX 1060 – a mid-range chipset that has enough power for graphically intensive work applications and after-hours gaming. Razer has deployed the version with 6GB of memory, rather than 3GB, which we're pleased about – although this chip doesn't have the professional certifications that you'll find on a Quadro or Radeon Pro component.

Nevertheless, it's potent. It blitzed through Dirt Showdown with an average of 102fps, and ran modern games like Witcher 3 and Deus Ex: Mankind Divided at 40fps and 38fps.

That doesn't just bode well for playing games – it means that this chip will handle photo and video work too, alongside other graphically intensive applications.

The GTX 1060 will also outpace the latest MacBook Pro in graphical benchmarks. The MacBook Pro 15 can be configured with an AMD Radeon Pro 560 with less memory and lower speeds than the Nvidia card.

The Blade performed well in thermal tests despite the slim construction and powerful components. It was silent when running less intensive tasks, and it was only a little louder when its CPU and GPU were subjected to a system-wide stress-test. It's quieter than many powerful laptops, and easy enough to drown out with a headset or speakers.

There weren't any temperature issues. The CPU's peak temperature of 92°C is a little high, but not dangerous, and the GPU peaked at a fine 76°C. The metal above the keyboard and on the rear of the base panel got a little warm, but it was never uncomfortably hot - and that's not a problem if this machine will be used on a desk. 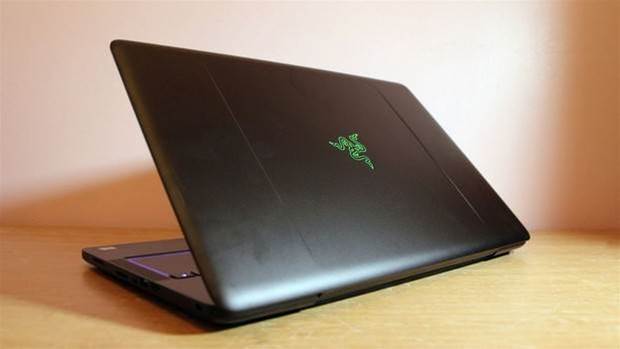 The battery, though, is more akin to gaming laptops. The Razer lasted for just short of three hours in our video test – not even half as long as the latest MacBooks. You won't even get half a day away from the mains with this machine, which will prove restrictive in a business environment – long meetings may not be possible without plugging in, for example. It's definitely a portable desktop-replacement rather than a genuine portable.

As you would expect, the Razer Blade Pro doesn’t come cheap, starting at $3,399.95 for the base model with Full HD display. The price jumps to $5,899.95 or higher for the 4K model, although that also includes an overclocked Intel Core i7-7820HK, double the RAM, even faster graphics, THX certification, and a selection of RAID0-configured dual SSDs, ranging from 512GB to 2TB in total capacity.

If you want an alternative to the MacBook Pro or Dell XPS 15, with larger screen, more graphical grunt and which is very adept at gaming , the Razer Blade Pro is a stellar alternative.