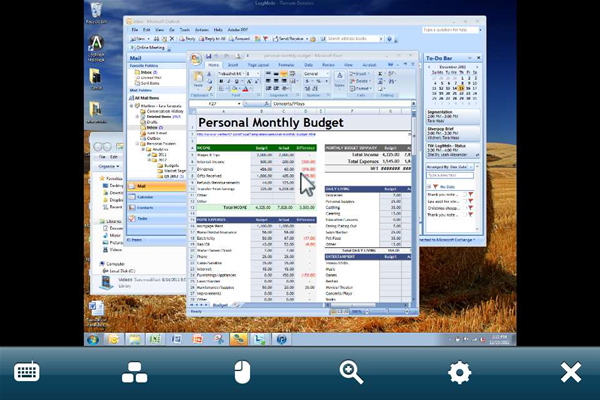 In both the home and work environment, there are numerous uses for remote access tools. For home users, the ability to not only access the files stored on a computer housed in another room but also take full control it as if you were sat in front of it can save a great deal of legwork when it comes to checking a document you need to read or checking the status of a download without having to run up and down stairs. Used for work, the possibilities are almost endless. Network administrators can control their entire network from almost anywhere, homeworking becomes a possibility for a far larger number of people – the list just goes on and on. There are a number of remote access tools available for iOS, LogMeIn is not only one of the best known, it is also one of the best. And the great news is that it is now completely free of charge.

The app was previously available for $30, and while many people could see the benefits of using such a powerful and useful tool, the price was a little off-putting. With the launch of a free version of the app – which is mercifully light in the restrictions department – the world of VPN has been opened up to a whole new audience who are now able to take advantage of remote access from a well-known name without having to part with any cash.

The free version of LogMeIn is a universal app and while the app can be installed on both iPhones and iPad, tablet owners are in for a treat with a version of the software that has been optimized for use on a larger screen. This is obviously a great advantage when remotely connecting to a computer as it is likely to have a display that is at least 17 inches in size. This is not to say that LogMeIn is not a good app when used on an iPhone; the interface has been designed in such a way that navigations and remote use is perfectly usable on the smaller screen.

The app can be used to take remote control of your Mac or PC – assuming that you have installed the necessary client software and your computer is switched on. Working with an iPhone, after logging into your account, you can see a small portion of your desktop at any one time – unless you adjust the zoom level – and you can then pan around using a fixed mouse cursor and onscreen mouse buttons. This system takes a little getting used to, but after a few minutes you will find that it work well and allows for easy navigation of your files and desktop.

Use your iPad on-screen keyboard to control a remote computer

Whether you are using an iPhone or an iPad, an onscreen keyboard is available that can be used ot type in remote apps so you really can use your remote computer as if you were sitting in front of it. Things do get a little cramped on the iPhone’s screen when the keyboard is activated, but it’s hard to see how this could have been avoided. The extra screen space available to iPad users means that the remote access experience is even more pleasing. The larger screen means that your remote desktop can be viewed at a larger size and the virtual mouse cursor can be moved around the screen rather than having to move a desktop aperture as on the iPhone. When the keyboard is activated, a larger section of your desktop remains visible which is a great help.

The app can be used to access both Macs and PCs, and although this free app does not include an integrated way to transfer files from one device to another, the overall experience is very good. Some additional features are available if you decide to upgrade to a LogMeIn Pro account – these can be unlocked via an in-app purchase should you decide that you need them. Paid-for features include the ability to stream audio and HD video as well as support for printing to AirPrint compatible printers. There are also additional file management options such as the ability to transfer photos and other files to and from your iPhone or iPad, as well as the My Cloud Bank feature which provides access to cloud storage services.

While these are features that are going to be useful, or even essential, to some people, they are features that the majority of potential remote computer users could live without. Even if you find that you cannot possible do without the ability to transfer photos from your iPhone to your computer, for example, there are ways around these minor limitations if you still do not feel inclined to part with any money. You could simply email files from your phone to an email address that you can remotely access on your computer and you can then save the image to that computer where you are free to work with it in whatever way you want. The slightly more basic feature set of the free version of LogMeIn exceeds that found in other similar tools and provides the quality and reliability that we have come to expect from LogMeIn.

The possibilities for remote computing are wide and varied. Whether you want to be able to access your files when you are on the move or would like to be able to provide remote assistance more easily, the fact that there is now a free version of LogMeIn available means that there has never been a better time to implement such as system for yourself.  Grab yourself a copy of LogMeIn Free for iOS from the App Store to see what all the fuss is about.

Verdict
Probably the most powerful and easy to use remote access tool available for iOS - LogMeIn shows how it should be done.
Overall
Specs
• free