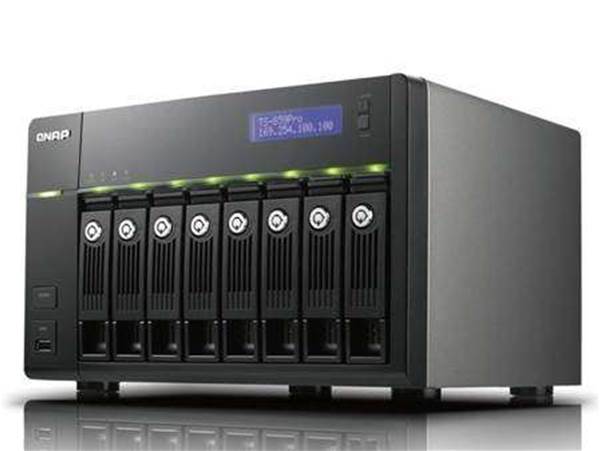 Well known for NAS storage devices, QNAP’s new TurboNAS TS-853 Pro really demonstrates what you can buy if you are willing to invest the money. Taking up about as much room as a small micro ATX case, the TurboNAS has an impressive eight bay system which can take an up to an insane 96TB of raw storage capacity. This hot swappable device is loaded with more ports and connection points than the average computer and works more independently than almost any device in its class. Coming standard with a stocky Intel Celeron 2.0GHz quad-core processor, 2GB of DDR3L RAM and an onboard flash disk for its operating system, this box has the potential to become the central hub of any network owner that can afford the price tag and is perfect for the industrious tech head or a small business.

The TurboNAS TS-853 Pro is easy to manage and thanks to its onboard interface and HDMI input, users can connect a keyboard and mouse through the systems USB ports to it and work entirely without an attached computer. Its specialised Linux operating system QT4 smoothly connects users to the entire inner workings of this stocky little box, giving you all sorts of options for how to utilize its impressive storage capacity.

Setup is a little more complicated than a just plug and play, users will have to install their own drives, log in to the device manually via a separate web login and then install the interface to be able to run the device independently. This unit honestly feels more like a computer than a NAS drive, there is a lot of setup involved in getting the TS-835 Pro up and running, which will be a bit of a deterrent to the less technically minded users, however once you are inside the operating system (called QT4), everything begins to make a lot more sense.

QT4 can be easily accessed from a web browser, and the interface offers a wide range of possible. It is a secure and scalable system that works on anything including tablets. QT4 comes standard with software for torrent downloading, music and video playback, backup, and much more. Files stored on the device can all be shared in the expected ways, DLNA and iTunes servers are on hand, plus FTP access and website hosting for building your own web platform or a locally run website. Users can then customise their experience with the provided app store, offering anything from extra antivirus software and Airplay support to classic online services like Dropbox and Google Drive. The TS-853 Pro also supports multiple virtual machines (VMs) through its Virtualisation Station, allowing you to run multiple systems at the same time and giving support for VMware, Citrix, and Microsoft Hyper-V. It also has its own software for security surveillance, perfect for small business or home security. Plus, the TurboNAS also comes equipped with powerful 256 bit encryption and comes inbuilt with virus scanning software to make sure your digital life is safe and secure at all times.

The TS-853 Pro supports SMB/CIFS, NFS, and AFP protocols for file sharing across Windows, Mac, Linux/UNIX networks and worked perfectly with several machines accessing information at the same time while also transferring files. In fact, the QNAP’s speed is where it excels the most. The test unit we were using was equipped with eight WD Red Pro drives and the testing provided very impressive results. Benchmarking staggering average speeds of almost 116 MB/s for write and 79.95 MB/s for read across a wired network, it is easy to see how it can handle so many programs and services simultaneously.

Though the price tag on the TS-853 Pro is a bit intense, for the incredible possibilities it provides this system is an amazing addition to any network. Although the setup is a bit clunky and some users will find the drive a bit noisy at times if left out in lounge room. This NAS is only really limited by your imagination and once running will instantly become the central hub for everything in your life from file storage, to virtual machines and home security. Its chart-topping write speed and impressive read speed manage to make it worth the money for those with an ample budget and if users are looking for a reliable storage system, with plenty of room for experimenting and later expansion, look no further than the Qnap TS-853 Pro.