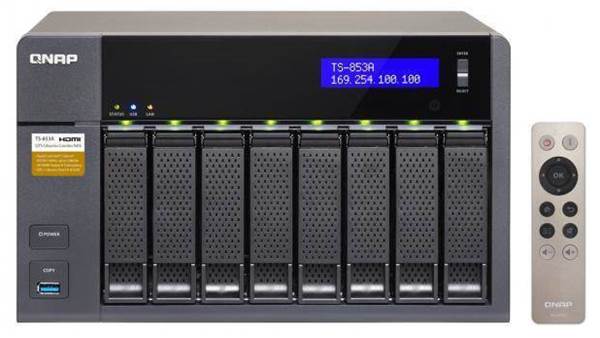 A NAS device that even be used as a Linux or Karaoke machine, the TS-853A offers plenty of business-class storage features too.

Just when we thought you couldn’t squeeze any more storage features into a NAS appliance, along comes Qnap’s TS-x53A family. With Intel’s Celeron N3150 processor in the driving seat, they have tons of data protection features while the new Linux Station app makes them Qnap’s first NAS devices that can run Linux as well as QTS, Qnap’s own operating system.

This allowed us to run QTS and Linux alongside each other and output the latter to one of the appliance’s dual HDMI ports for local control. A key difference between Qnap’s Container Station, its separate virtualisation app, and the Linux Station app is that the latter has full access to all storage and shares on the appliance.

On review unit was the eight-bay TS-853A with 8GB of DDR3L memory – the maximum supported by the N3150 processor. There are four Gigabit Ethernet ports and four USB3 connectors, but the lack of expansion slots means you can’t upgrade to 10-Gigabit Ethernet.

There’s even a pair of microphone sockets at the back that you can team up with the free OceanKTV app to turn the TS-853A into a Karaoke machine – which, admittedly, isn’t a feature that every business will be excited about.

The Linux Station app runs on appliances with at least 4GB of memory and the Container Station app loaded. On first startup, it downloaded Ubuntu Desktop and installed it for us without any fuss.

We had it ready for action in 15 minutes, but support for Debian and Fedora are future features yet to be certified by Qnap. We had no problems using it with a local HDMI monitor, keyboard and mouse plus we could enable remote desktop and VNC to it using a web browser. 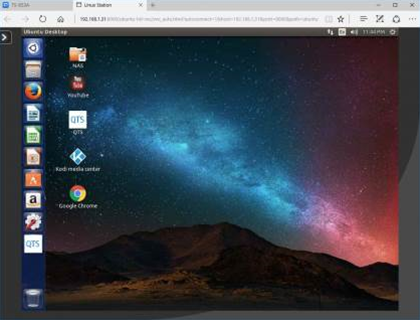 We ran Ubuntu Desktop from Linux Station and
remotely accessed it using VNC.

One glitch is you can’t have the HD (HybridDesktop) Station active at the same time as they can’t both use the HDMI ports. This isn’t a huge drawback as the HD Station app, used for browsing the web and playing locally stored media files, is redundant as you can accomplish the same tasks in Linux. Even so, we could swap between them as needed. You’ll similarly need to swap between apps if you also want to use the HD Station app for streaming multimedia access, but this is easier as Qnap includes a handy remote control handset.

It also delivered top IP SAN speeds with Iometer reporting sequential read and write speeds of 116MB/sec for a 600GB target. We upped the pressure with a quad-Gigabit MPIO link and saw Iometer return read and write rates of 465MB/sec and 330MB/sec. 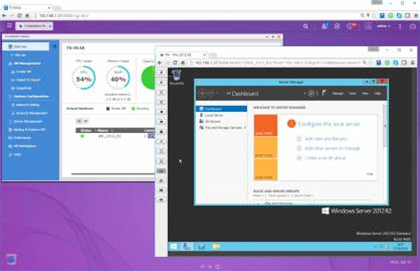 Qnap’s snapshots can run on EXT4 thick and thin volumes – Synology only supports them on its 64-bit appliances that use BTRFS and the new Snapshot Replication app. Qnap’s Snapshot Manager app makes light work of creating snapshots of NAS volumes and iSCSI LUNs where we could run them on-demand or schedule them.

Smart snapshots save space as they’ll only be taken if data has changed since the last one. Recovery is equally pain-free as we viewed our snapshots and could use the Revert option for a full recovery or we could browse specific NAS volumes and restore individual files.

The Snapshot Replica feature is great for off-site backup as it takes a snapshot of a local appliance and replicates it to a remote one. We tested this with a TS-1263U-RP and after an initial replication of a test volume on the TS-853A, we could run scheduled incremental snapshots, view the vault on the remote unit, restore files and clone entire snapshots. 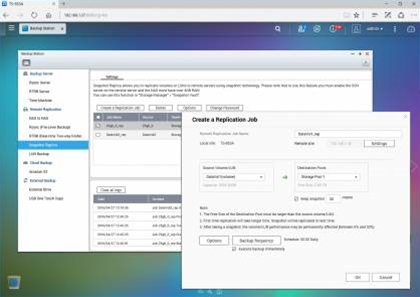 The Snapshot Replica app can replicate volumes and
iSCSI targets to remote sites.

Cloud provider support is top notch with free apps for Microsoft Azure, Google Cloud Storage, Amazon Glacier, iDrive and more. Amazon S3 is supported in the Backup Station app which we used to secure data to buckets in our cloud account.

The new Connect to Cloud Drive app links up with file syncing services such as Dropbox, Microsoft OneDrive and Google Drive. We linked it to our own accounts and could view all their contents from the File Manager and use it to upload and download files. 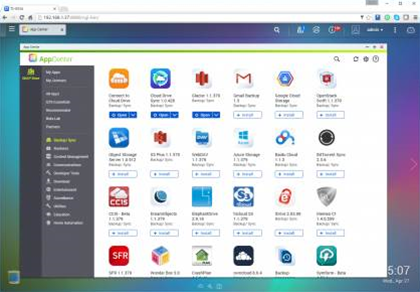 If you can look past the TS-853A’s multimedia features and Karaoke ports, small businesses will find a big data storage repository at a fair price. Qnap’s QTS software delivers plenty of data protection features and performance is exemplary.

The Linux Station could prove useful for developers and there are plenty of other virtualisation features as well. It’s also pretty good value. We’ve seen the 4GB RAM version selling for around $1,415 (without disks), the 8GB RAM version for $1,610 and the 8GB version with eight Seagate 1TB IronWolf NAS drives going for $2,380.