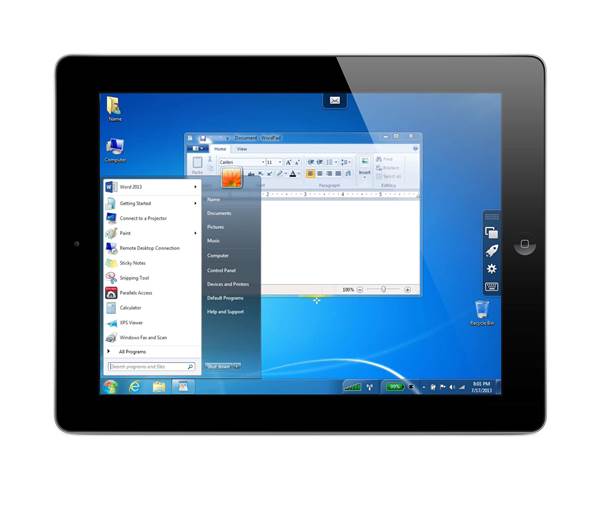 No matter how clever mobile devices get, there’ll always be some apps that simply work better on a desktop computer. Parallels Access offers to bridge that gap by giving you full access to the programs and files on your home/work computer on your iPad. Essentially, it’s like running Windows or Mac OS on your iPad.
Of course, Parallels Access isn’t the first app that’s enabled this functionality. It joins a handful of other apps like LogMeIn, Splashtop and TeamViewer, all of which make it possible to access a desktop PC remotely. The main difference with Parallels Access is that it offers better support for native iOS functions, making your desktop programs seem more like native apps.
Newsletter Signup

I have read and accept the privacy policy and terms and conditions and by submitting my email address I agree to receive the Business IT newsletter and receive special offers on behalf of Business IT, nextmedia and its valued partners. We will not share your details with third parties.
All of the multi-touch gestures that you’d be familiar with on your iPad are supported in the desktop programs you access through Parallels Access. All of the programs installed on your computer are gathered together and presented in a special launcher similar to the iPad’s homescreen, and you can even scroll through open apps without leaving the one you’re currently using through the pop-up running apps bar.
Other iOS-native functions supported by Parallels Access are the pop-up copy and paste control bar (which appears whenever you highlight text) and the iOS magnifying glass that lets you precisely place the cursor at a certain point. The standard iOS keyboard is also present, but it’s been modified with additional keys that you’ll need to control your desktop, such as Control, Alt and Tab.
One of the main complaints with Parallels Access when it first launched was that the annual $84.95 subscription fee per computer was too costly. It has since been reduced to $51.99, but it’s still considerably more expensive than LogMeIn (free, with a Pro version that costs $20.99 a year) and Splashtop 2 ($10.49, with optional add-on packs) – both of which offer more remote access features than Parallels Access.
Verdict
Get access to the programs and files on your home/work computer on your iPad. Essentially, it’s like running Windows or Mac OS on your iPad.
Performance
Features
Value for Money
Overall
Copyright © PC & Tech Authority. All rights reserved.
Tags:
parallels software
By Jenneth Orantia
Nov 21 2013
12:55PM