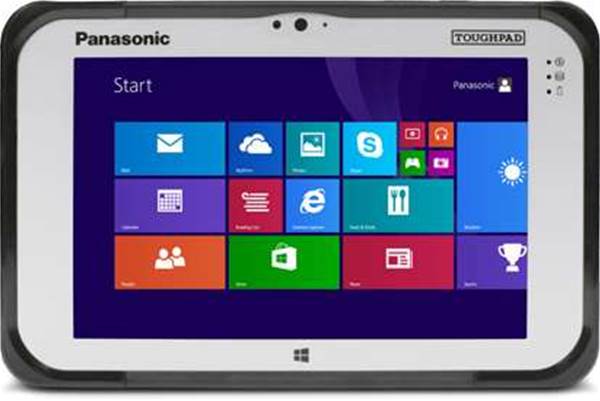 At 18.8mm thick and weighing 540g, the FZ-M1 is hefty by compact-tablet standards. It would be churlish to hold its heft against it, though, since its purpose-built to flourish in environments that would spell doom for most devices.

The hardened exterior is cast from metal and hardened plastics, and a strip of black rubber encircles the edges, flaring out to protect the corners from accidental drops. The rubber edges offer decent grip, and their rounded profile makes the FZ-M1 comfortable to hold.

It has the credentials to match its tough-nut physique. Panasonic has tested the FZ-M1 to MIL-STD-810G standards, which means it’s able to survive drops of up to 5ft, as well as exposure to shock, vibration, humidity and extremes of temperature. It also boasts an IP65 rating for water- and dust-resistance thanks to its sealed  design: its single USB 3 port, 3.5mm headphone jack and 19V PSU input are safely hidden away behind thick rubber flaps, and the microSD and SIM slots are sealed behind the battery at the rear.

The 1,200 x 800 touchscreen is designed to take outdoor use in its stride. The matte IPS panel is lit by an LED backlight that tops out at a gleaming 492cd/m², and as a result the display remains legible on even the sunniest of days. Image quality isn’t exemplary, but while colours are lacking in vibrancy, the panel’s contrast ratio of 705:1 is wide enough to dredge up lots of detail in shadows and highlights.

The touchscreen is more flexible than most. It supports ten-point touch input as standard, with Panasonic’s Dashboard app giving access to touch, stylus and gloved-touch modes, plus a “water” mode. Our review unit was supplied with the optional capacitive stylus, which worked well in our tests, providing enough accuracy for scribbling notes and writing onscreen. The stylus is also handy for navigating the OS with gloves on, and provides pinpoint control even in fiddly desktop applications.

Panasonic has squeezed a highly capable roster of hardware into the FZ-M1’s compact chassis. Underneath all that metal and rubber is a passively cooled 1.6GHz Intel Core i5-4302Y CPU, 8GB of RAM and a 128GB mSATA Samsung SSD. In our Real World Benchmarks, the low-voltage CPU acquitted itself fairly well, delivering a serviceable Overall score of 0.47. The 128GB SSD does its bit to keep Windows 8 feeling snappy, and helped the Toughpad cold-boot in a whisker less than eight seconds.

Battery life is competitive. With the screen dimmed to 75cd/m², the FZ-M1’s 22Wh, 3,220mAh battery lasted for 9hrs 14mins in our usual light-use battery test. Panasonic also offers a long-life 7,100mAh battery option, as well as an optional “bridge” battery that lasts for around 30 seconds – long enough to swap battery packs without powering down.

And aside from performance, the FZ-M1 is packed with features. Even the bare-bones model comes with dual-band 802.11ac Wi-Fi and Bluetooth 4, and IT departments will appreciate additions such as the TPM 1.2 security and Intel vPro support. The front-facing 0.9-megapixel camera pairs up with a serviceable 8-megapixel sensor at the rear, and the rear camera is also equipped with an LED flash.

There’s a wide variety of optional extras, adding anything from integrated GPS, 4G mobile broadband and pass-through connections for an external high-gain Wi-Fi antenna, to a selection of plug-in modules that provide barcode, magnetic stripe and RFID readers.

As ever, the Panasonic Toughpad FZ-M1’s talents come at a considerable price but it easily lives up to its name. It’s supremely well designed, and for those who need a tablet that can withstand the kind of abuse that would ruin any other device, the FZ-M1 stomps all over the opposition.

Verdict
The Panasonic Toughpad FZ-M1 is supremely well designed, and for those who need a tablet that can withstand the kind of abuse that would ruin any other device, the FZ-M1 stomps all over the opposition.
Performance
Features & Design
Value for Money
Overall
Specs
$2700 AUD
(pricing info)
Copyright © PC Pro, Dennis Publishing
Copyright © PC Authority, nextmedia
Tags:
fzm1 hardware panasonic review toughpad
By Bobby McPherson
Aug 14 2014
3:23PM