Office 365 vs Google Apps: the comparison

It also aids communication. Your Team Site includes pages for each user where they can blog, share links and documents, and access their files on the move. The range of options is more complex than Google’s offering, but it’s also far more powerful.

Google Docs has no direct equivalent to SharePoint Online. Sites is a nice simple tool for creating internal or external web pages, while Google Docs allows you to control whether users can publish or share documents outside the business, and whether documents default to being private or public. Otherwise, sharing is all ad hoc and under users’ control.

WINNER: OFFICE 365. This isn’t clear cut, however. Office 365 has much more capable sharing features, but these are correspondingly more complicated to manage. Some will prefer Google Apps’ simplicity.

Google Chat is the same simple but powerful tool available to the public; users can see the presence of Google Apps contacts inside Gmail and start a text, voice or video chat from there, once they’ve downloaded the plugin. Alternatively, they can use the Windows Google Talk software for text and voice chat or file transfer

Microsoft’s Lync Online is more powerful. The extensive management options let you choose whether users can transfer files, make audio or video calls, and talk to colleagues or people outside the business.

Users can see each other’s presence and status in Outlook and Outlook Web Access (including information from Exchange calendars), and in any Office app where you’re collaborating. It’s possible to start a chat, voice or video call from there or from the Lync client. Microsoft is also promising Lync clients for a range of smartphones, offering IM first and voice features later.

Lync Online automatically federates with Windows Messenger and AOL for instant messaging. It can also federate with on-premises Lync servers, if permitted by the server admin. Google Apps can federate with any XMPP service, but to make it work you have to edit the SRV record in your domain by hand (or ask your domain host to do it for you). You then get federation with all the services Google is connected to – you don’t get to choose which are allowed or blocked.

WINNER: OFFICE 365. Apps’ messaging and chat features are fine for most users, but for manageability, Office 365 is better.

Create a PowerPoint presentation in the Office Web Apps and you get good-looking themes, with the images you have placed automatically sized to fit. A Google Docs presentation starts out in plain black and white, and the designs aren’t as appealing.

Sharing is better integrated in Google Docs, with a big blue Share button on the page that opens a pop-up dialog box. The Office Web Apps make you save the document and take you away from the editor to choose who to share it with, and take you back to viewing, but not editing, the document. Updates appear live in Google Docs; this also happens in the OneNote Web App, but the other Microsoft Web Apps make you save your own changes to see edits by other users.

There are many features in both Outlook and Outlook Web that are missing from Gmail, from macros to Quick Steps. Gmail equivalents tend to have fewer features, which some prefer because they’re simpler. Gmail’s stars, labels and priority buttons let you do the same things as Outlook’s flags, categories and folders.

Google Calendar can include shared resources – such as meeting rooms – which you create by typing in the details one at a time. Oddly, there isn’t a dropdown picklist to ensure the resources are given consistent names, or a wizard to help with the complex naming conventions, so you could end up with six “conference rooms” and one “meeting room”.

Exchange Online has templates for creating resources such as rooms (as well as equipment that isn’t in a fixed location); you can even say which users can reserve rooms without permission and how often.

The Google Calendar features for end users aren’t as powerful – or as complex – as Outlook’s, but you get the important options, such as overlaid calendars and recurring appointments. The Quick Add tool lets you type in a sentence, including the day and date of what you need to do, which then sets an event on the right day at the right time. This is a phenomenal time-saver.

WINNER: TIE. Microsoft’s Web Apps are more sophisticated than Google’s equivalents, but Google Docs has better sharing and collaboration features. Exchange Online has a plethora of configurable options, but many will prefer the simpler approach of Google Apps.

Depending on which plan you sign up for, Office 365 can include download rights for the Professional Plus version of Office 2010, which includes OneNote, Publisher and Access as well as Word, Excel and PowerPoint. You can load and save documents from all of them into the SharePoint Online site included in Office 365, and use the online collaboration features to edit documents at the same time.

Although offline access to Gmail and Google Docs is only available (for the time being) to Google employees, Google recognises that offline document access matters. You can run software to sync Outlook with Gmail, Calendar and Contacts, and to move Outlook Notes to Google Docs (although they’re read-only, and it doesn’t sync notes filed in folders).

There’s a connector toolbar for Office that lets you sync documents to Google Docs, but it isn’t as polished as the SharePoint integration, and converting files into Google Docs for editing online doesn’t preserve all document features (the same thing happens when you open an email attachment in Google Docs).

WINNER: OFFICE 365. Microsoft’s offline support is far from polished, essentially being dependent on SharePoint and subscription access to the full Office suite. However, it remains far more capable than Google’s crude offline tools.

The Google Apps dashboard repeatedly told us that there might be a problem with an unspecified Google Apps service; whenever we clicked through to the dashboard, all the services showed as having no issues, but seeing the warning virtually all the time was concerning. Office 365 has a similar service health dashboard; neither service had any major outages or failures while we were testing them, but Office 365 didn’t keep warning us of non-existent problems. 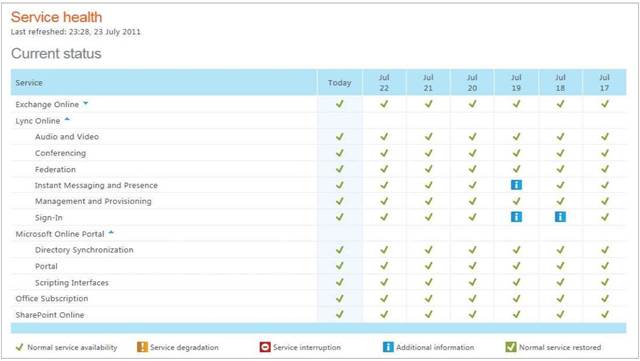 Google Apps has no planned downtime; Office 365 does schedule maintenance when usage is likely to be low and dates and times are listed five days in advance in the support area.

Support is definitely better with Office 365. You can request support via the admin console and your requests are managed there, but 24/7 phone support is also available, with response times from 15 minutes to four hours, depending on severity.

Google Apps also has 24/7 phone support, but only for critical problems that involve more than half your users and affect the Google Apps web services. If the problem is with mobile emails you’re stuck with email support, which doesn’t cover weekends.

WINNER: OFFICE 365, but only just. It’s tough to judge how reliable a cloud service is, but Microsoft’s support has better availability.

Getting continuous, instant improvements is one of the benefits of using a cloud service, but if you’re supporting users you might prefer Microsoft’s approach where updates come at regular intervals, and you can choose whether to adopt them immediately or by a specific date.

This underlines one key and fundamental difference between the two services, which has little to do with features:

Office 365 has the professional feel of a service planned in advance and designed for administrators; Google Apps has the feel of a service that has grown by leaps and bounds, but sometimes in a rather haphazard way that’s not always as consistent as you may wish.

Both services are powerful but they suit different audiences. If your business already uses Microsoft tools, Office 365 is the logical progression, letting you integrate with and make the most of your existing investments. It’s a comprehensive, powerful, end-to-end cloud platform for business that doesn’t make you do everything online, which many businesses find a step too far. You can have all the power of Exchange and SharePoint without the bother of configuring and running either of them.

Google Apps, meanwhile, is a better fit for businesses starting from scratch online, with no legacy systems, who can benefit from its simplicity without having to keep the service in sync with on-premises tools. But, as we’ve seen throughout this feature, it definitely has limits.