Office 365 vs Google Apps: the comparison

We put the two leading cloud-based office suites to the test, to discover which one is best suited to small business.

A few years ago, the suggestion that Google could produce a viable alternative to Microsoft Office would have been laughable – but its Apps suite has become a valid and lauded business tool. No wonder Microsoft is fighting back against this specific threat with Office 365.

Office 365 isn’t a new version of the Microsoft desktop suite: it’s a cloud service that includes online versions of the tools that IT professionals the world over have come to love, and sometimes hate. You also benefit from online versions of Word, Excel, PowerPoint, OneNote and Outlook – and some subscriptions include the desktop-based Office Professional Plus 2010.

So to the big question: which is best for your needs? That’s what this feature aims to find out, as we put both through real-world tests and pitch them in battle in all the key areas.

As cloud services, both Google Apps and Office 365 are managed online. Despite the simple layout, the Google Apps control panel is confusing until you learn where everything is.

Options are scattered between Domain Settings, Settings, Advanced tools and the various links from the Dashboard tab. To make matters worse, the Dashboard is cluttered with adverts for optional tools in the Google App marketplace, as well as adverts for new features. 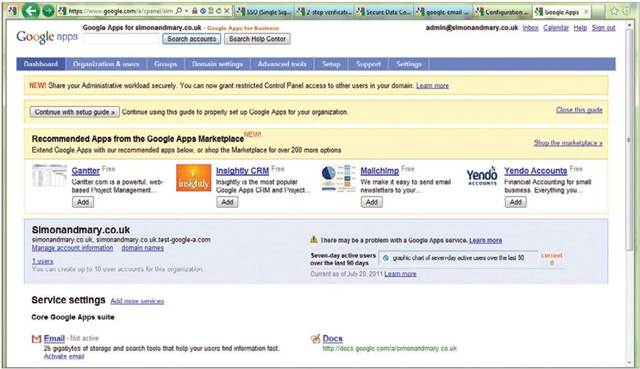 The Google Apps admin page is cluttered with adverts for new features and third-party tools.

Office 365’s admin console is much cleaner, with a pane for switching between managing users, services and domains, plus clear explanations of what the main management tools are for. There are also handy shortcuts at the bottom of the window, and links to relevant resources and community discussions.

Google Apps has two levels of administration rights: the “Super Admin” who has full access, and standard administrators to whom you can delegate administration tasks. You can give different users a different mix of rights, but you have to remember who can do what.

Office 365 has five named admin roles. You can give someone the rights to manage billing, passwords, users or services separately if you don’t want them to have full admin rights. If you need more granularity, you can also set up administrator roles for Discovery Management, Records Management, Unified Messaging Management and other tasks in the Exchange control panel. It’s more complex than Google Apps, but enterprises will welcome the option. 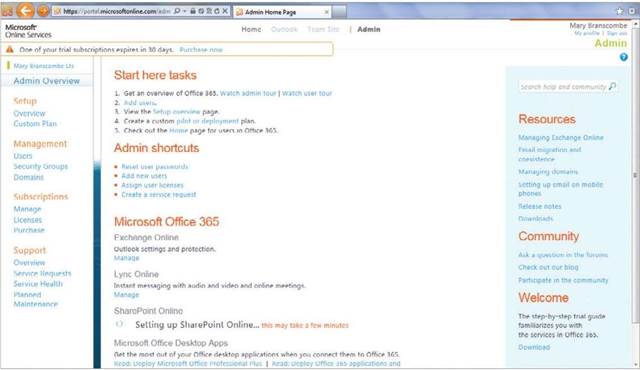 Unlike Google Apps, the Office 365 dashboard is clear and well laid out; you can see immediately what to do.

WINNER: OFFICE 365. Microsoft’s administration interface is better organised, and easier to handle when delegating management rights to others.

Google Apps’ setup guide walks you through tasks such as verifying the domain you’re using, creating user accounts and changing your MX records to point to Gmail (you need your own domain to use Google Apps). It’s mostly clear and simple, but duplicated instructions and a sometimes circuitous interface make setup a fragmented experience.

The Postini spam service setup wizard tells you it may take up to an hour, and again you have to change the MX records to redirect mail to the Postini service, and configure some settings in Google Apps email by hand. It screams for automation and indicates that Google still hasn’t fully integrated the Postini acquisition with its platform.

Office 365’s Forefront Online Protection for Exchange, SharePoint and Lync Online are running by default, so all you have to do is create or migrate users. You only need to configure settings if you want an optional vanity domain, to get finer control, or if you’re integrating with on-premises servers. Thankfully, the guides to doing this are clear and detailed.

You can create Office 365 users individually – assigning admin rights and turning on services for them at the same time – or as a batch by importing a CSV file. You even get PowerShell cmdlets that let you configure Office 365 from the command line.

To create Google Apps users, you can set them up one by one in the control panel or import a CSV file, but most enterprises will use Google Apps Directory Sync to get user details from AD or Lotus Domino (which the setup guide doesn’t cover). This is a one-way sync, and you have to leave the tool running on your local server, make changes to users in AD and propagate them up to Google Apps.

To migrate mailboxes, you have to run an Outlook sync utility for each user individually, and you can’t migrate distribution lists, so you have to recreate them. It’s initially confusing which tools you need for synchronising and migrating different information and settings to Google Apps, especially as the help pages often refer to old tools that have been replaced.

What Google Apps calls “groups” are merely mailing lists. To control who gets what Google services, you need to set up organisation units (OUs). These cover both the core offerings, such as Gmail, and the range of other Google tools – such as YouTube and Picasa. Note that your business will be bound by such services’ terms and conditions if your users sign in with their work Google Apps account, so OUs are useful for disabling access if you don’t want to accept those terms.

You can also use OUs to restrict which domains users can send email to. You can’t use them to control any other settings, though, so they’re not as powerful as AD groups. You can’t delete an OU without moving or deleting the users first, but deleting a user does give you the choice of deleting their documents or moving them to another user.

Both Microsoft and Google promise single sign-on. If you have AD and ADFS2, Office 365 users can use their Windows login to sign onto the local network (including any business apps you’ve integrated with that login) and to Office 365 services. Your Google Apps login gives you access to all the online Google services, plus services that aren’t part of Google Apps, so long as the administrator allows this.

WINNER: OFFICE 365. Microsoft’s product is easier to set up and integrate into your company’s existing infrastructure.

Office 365 has a simple interface for basic admin options such as managing passwords, but you can also use the full Exchange Online interface. This is identical to the web interface for Exchange Server, so it will be very familiar to Exchange admins. You get a comprehensive set of tools for setting up features such as role-based access control, transport rules (such as adding disclaimers to external email) and reports to help you track down any problems, along with auditing logs for compliance. Or you can stick to the basics and be set up in minutes. 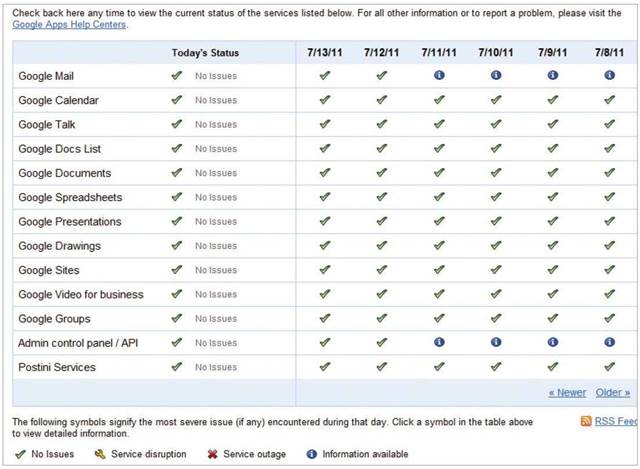 Despite frequent warnings about a problem, Apps didn’t record any disruptions to the service.

Gmail has vastly fewer options because you don’t control a mail server, although you do have some control over routing and mail gateway settings. The options are mostly on the level of setting up a custom URL for users, choosing whether they can use Gmail Labs and Chat, and allowing Docs results to show up in a Gmail search. With Google looking after the mail server, most businesses won’t need more admin options.

Both Google Apps and Office 365 have a mailbox limit of 25GB. There isn’t an archiving option in Gmail, but with Office 365 you have a choice between third-party archiving services, or a specific Office 365 plan with unlimited storage for email archiving.

Google Apps for Business includes Postini for spam and malware detection. The Postini admin console is separate from the main Google Apps console, and has tabs for viewing messages detected as junk or viruses in the past three days, a week, or for as long as it keeps records.

For spam, you can whitelist individual senders, domains or mailing lists, and block specific addresses or domains. You can also set up inbound and outbound content filters for specific words, phrases or patterns, and create attachment filters by size or type. You can choose five levels of spam blocking, from lenient to very aggressive, and use filters to put more emphasis on blocking explicit, “racially insensitive” and financial spam.

The Forefront admin console is separate and has a very different interface from the rest of Office 365; it’s confusing for anything except checking quarantined email. In return, you get the powerful Forefront Online Protection for Exchange tools. These not only provide malware and spam filtering, but also give options to whitelist specific IP addresses, options for auditing and tracing messages, and extensive filtering rules for both inbound and outbound email. You can therefore write rules to stop your users from emailing confidential information, such as credit card numbers.

WINNER: TIE. Gmail is perfect if you want to get up and running as quickly as possible, while Office 365 provides fine-grained controls and capabilities that will suit more fastidious organisations