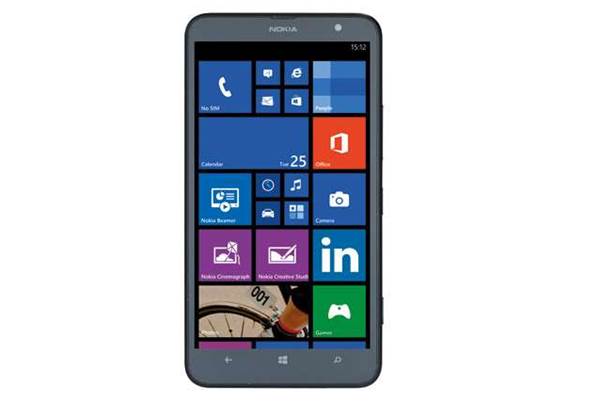 The Nokia Lumia 1320 has a large 6in screen for watching films and TV on the go. Its 1,280x720 display provides ample room for apps and icons on the home screen and enough pixels for showing web pages clearly.

The Lumia 1320’s huge size takes a little getting used to. It’s difficult to use in one hand, but the rounded corners make it comfortable to hold. Nokia hasn’t compromised on the Lumia 1320’s build quality either, as it has a smart unibody design. We noticed a slight amount of flex in the back panel, but it otherwise feels very solid indeed.

Colours look bright and vibrant on the IPS screen, and when we compared the Lumia 1320 side by side with the more expensive Lumia 1520, the difference in image quality was small enough not to matter much.

The Lumia 1320 is one of the quickest Windows Phones we’ve tested. Its dual-core 1.7GHz Qualcomm Snapdragon S4 processor makes the operating system feel smooth and responsive. Internet Explorer doesn’t lag behind either, as it completed the SunSpider JavaScript benchmark in just 713.4ms. The Lumia 1320 is quicker than other phablets such as the Samsung Galaxy Mega, which took 1,111ms to complete this test. Zooming in and panning round pages is smooth and images load quickly, even on complex and graphics-heavy sites. The screen’s resolution means that reading desktop-based web pages when fully zoomed out is a bit of a strain, so you may still need to zoom in slightly.

The only minor annoyance is the behaviour of the back button. Pressing the button while browsing takes you back through previous pages, but once you return to the main home screen and re-open your browser, it won’t remember your history. Instead, pressing back simply returns you to the app tray. The recent pages tab in the browser’s menu bar is a decent workaround when it comes to finding lost web pages, and you can always install a third-party browser such as the UC Browser to compensate. This will apparently be fixed in the upcoming Windows Phone 8.1 update.

Our normal 3DMark benchmark isn’t available for Windows Phone, but we ran the GFXBench T-Rex HD test instead. The Lumia 1320 only completed this with a jerky average frame rate of 7.1fps, though, so it will struggle with demanding 3D games. Despite this, simpler titles such as Temple Run and Jetpack Joyride worked perfectly well.

Another compromise Nokia has made on the 1320 is downgrading its camera to a mere 5-megapixel sensor. This is a big step down from the Lumia 1520’s 20-megapixel model, and you don’t get Nokia’s Pro Cam app either, with its fancy effects. As a result, our outdoor shots weren’t much better than those we’ve seen from budget smartphones. Noise was present throughout the image, and detail lost in muddy patches of pixels. The sky was overexposed, too, with sunlight appearing as searing white patches.

This is mildly disappointing when the rest of the handset is so good, but one area in which the Lumia 1320 truly excels is battery life. In our continuous video playback test, its 3,400mAh battery managed an impressive 13 hours, 22 minutes with the screen set to half brightness, which beats both the Lumia 1520 and 1020 by a good hour. This is superb for a mid-range phone, making it perfect for keeping you entertained on long journeys.

Bear in mind that the Lumia 1320 also has only 8GB of storage, which will limit how many films you can take with you on the move. There’s a microSD card slot below the micro SIM card slot under the back panel, though, which can take cards up to 64GB in size.

The Windows Phone Store isn’t as wide-ranging as the Google Play Store or Apple’s App Store, but you should still be able to find most essential apps, and as time passes more and more apps are added.

The Lumia 1320 comes with a few Nokia-specific apps that are surprisingly good alternatives to Microsoft’s. Our favourites are Nokia Beamer and HERE Maps. Nokia Beamer builds on the Photo Beamer app, but rather than simply displaying photos from your photo gallery in another device’s web browser, it will also mirror the Lumia 1320’s whole screen, turning your phone into a portable projector. You just need to go to https://beam.nokia.com on your other device’s web browser and use your phone to scan the QR code shown to begin beaming. It’s no good for video, though, as there’s a delay between each refresh on your other device, but it’s a fun way of showing off photos without having to worry about connecting any cable – especially if you find yourself away from home or the office and need to deliver an impromptu presentation.

The Nokia Lumia 1320 is a great mid-range Windows phablet. While the camera’s by far its weakest point, it’s a superb alternative to the considerably more expensive Lumia 1520 and we greatly prefer it to other Android phablets such as the HTC One Max and Samsung Galaxy Mega. If you’re not fussed about taking pictures, the Lumia 1320’s great screen and excellent battery life is just the thing for surfing the web and watching video on the move, all without breaking the bank.