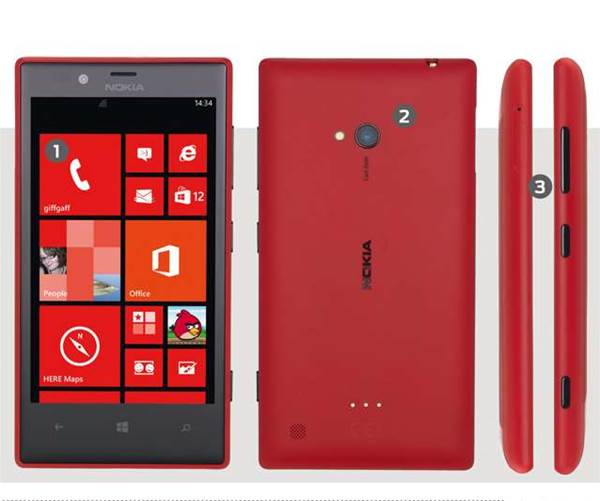 The Lumia 720 is Nokia’s latest assault on the mid-range market, but you wouldn’t know it from the outside: its build quality and design are better than we’ve seen from many flagship handsets
The rear is made from high-quality, robust matte plastic, which curves gently around the edges of the device to the glossy black screen. As with the rest of the Lumia range, the 720 comes in a range of colours: the red you see here, plus black, white, blue and yellow versions. It’s eye-catching whichever one you choose.
Newsletter Signup

I have read and accept the privacy policy and terms and conditions and by submitting my email address I agree to receive the Business IT newsletter and receive special offers on behalf of Business IT, nextmedia and its valued partners. We will not share your details with third parties.
Build quality is excellent, with barely any give in the back panel. The screen is made from Gorilla Glass, and the panel isn’t only tough; it’s also hyper-sensitive, so can be used with gloves.
The 720 is slim and light: at 9mm it’s one of the thinnest phones in the Labs, and its 128g weight makes it comfortable to carry around. Nokia has even seen fit to include a microSD slot, although the unibody design means there’s no battery access.
The 4.3in IPS screen is superb. The measured brightness is the second highest we’ve ever tested, and it’s readable in full sunlight. The contrast ratio of 1157:1 ensures punchy colours. In fact, there’s only one problem, and that’s the resolution: at 480 x 800, it isn’t as sharp as we’d like at this size, especially when the similarly priced Nexus 4 has a 768 x 1280 display.
The phone’s 1GHz Snapdragon S4 Plus processor and 512MB of RAM don’t race through the benchmarks. But thanks to its Windows Phone 8 OS, the Lumia never felt less than fluid in day-to-day use, and top-end games such as Asphalt 7: Heat ran flawlessly.
Screen resolution and all-out performance are this phone’s only major weaknesses, though. Battery life is superb, with the Lumia 720 reading 80% on the gauge after our 24-hour test. There’s 8GB of storage, NFC, and Nokia’s excellent software bundle: Here Maps and Drive deliver satnav and downloadable maps, Nokia Music offers free streamed music, and there’s Microsoft Office software as well.
The Lumia 720’s camera is among the best of any mid-range phone – a tad better than the Nexus 4’s. Although the 6.1-megapixel resolution isn’t anything special, our test photos looked great, with balanced colours and little distracting noise. We did experience the odd mis-focus, but this is a minor issue, and the macro mode worked well.
The Nokia can’t compete with the Nexus 4 on screen resolution or screen size, but it has better screen quality, battery life and a slightly superior camera. The Nokia Lumia 720 is currently cheaper, which gives it the edge – it’s a phone worth switching from Android for.
Verdict
An excellent camera and superb battery life make the Nokia Lumia 720 our favourite mid-range smartphone. Read the review.
Performance
Battery Life
Features & Design
Value for Money
Overall
Specs
$300 AUD
(pricing info)
Copyright © PC Pro, Dennis Publishing
Copyright © PC Authority, nextmedia
Tags:
720 hardware lumia nokia review
By Staff Writers
Dec 19 2013
5:20PM