Nokia Lumia 1020 reviewed: expensive, but the most desirable Windows Phone 8 handset yet 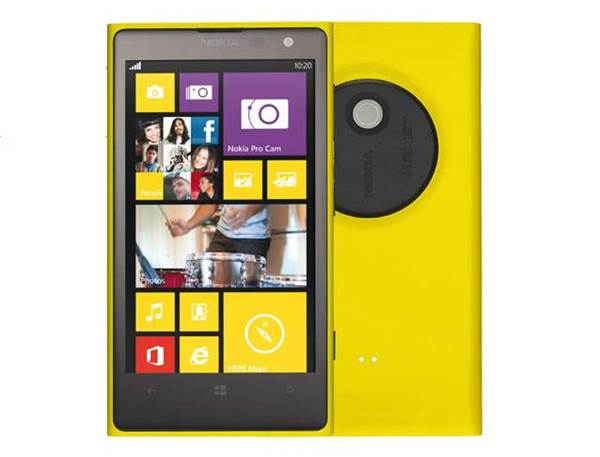 It’s been a long time coming, but Nokia has finally got around to including the 41-megapixel sensor technology from the 808 PureView in a smartphone worthy of the name. And after a frustrating wait, the Lumia 1020 has finally arrived in the Australia.
Design-wise, it’s the natural successor to the Lumia 920. Just like that handset, it’s constructed from a single block of high-quality plastic, with gently curved sides and squared-off ends. As you’d expect from a flagship Nokia handset, it feels fantastic in the hand – the silky, matte finish is a cut above most smartphones. We love the bright yellow of our review sample, too, although it’s also available in white and black.
Newsletter Signup

I have read and accept the privacy policy and terms and conditions and by submitting my email address I agree to receive the Business IT newsletter and receive special offers on behalf of Business IT, nextmedia and its valued partners. We will not share your details with third parties.
While the chunky camera unit swells the 1020’s body, it isn’t outrageously bulky: it weighs 158g, which although heavy when compared to the 130g Samsung Galaxy S4 and Apple’s iPhone 5s, is 26g lighter than the 920.
Aside from losing the wireless charging feature, nothing’s missing from the specifications list. There’s a 4.5in, 768 x 1280, OLED display with a Gorilla Glass front, a 1.5GHz dual-core Qualcomm Snapdragon S4 CPU, 2GB of RAM, and 4G compatibility.
However, if you’re interested in the 1020, it won’t be for the design – it’s all about the snapper on the back. The 1020 uses a 2/3in, backside-illuminated, 41-megapixel sensor to produce 34-megapixel images at an aspect ratio of 16:9, or 38-megapixel photos at 4:3. It has a Carl Zeiss-branded f/2.2 lens; a shutter speed range of 1/4,000s to 4s; an ISO range of 100 to 4000; and the ability to adjust the focus and the white balance, and set exposure compensation between -3 and +3EV in 1/3 stop steps.
All the settings can be adjusted manually via the intuitive, dial-based interface of Nokia’s Pro Camera app. This delivers the sort of control normally associated with enthusiast compact cameras and DSLRs, such as the ability to limit noise by keeping the ISO low, or to freeze fast action by setting the shutter speed high. There’s also an optional camera grip, costing $89, which snaps onto the rear and adds a supplementary battery, a tripod thread and a larger, two-stage shutter button.
In practice, the main bonus of the 41-megapixel sensor is the ability to zoom into a scene without the need for bulky optics. This can be achieved in-shot, by dragging a thumb up and down on the display, or by cropping into the image after snapping. You can even re-crop a zoomed-in shot after the fact, since it always keeps a copy of the full-resolution image.
How does it work? Brilliantly. It produces far more detailed zoomed-in snaps than a standard smartphone camera, and it works with video, too, allowing lossless, 4x zoom on 1080p footage, or 6x zoom on 720p. We’d have preferred the in-video zoom to be less jerky, however.
The second benefit is oversampling. At the same time as capturing the high-resolution image, the 1020 creates a second, 5-megapixel photo. Thanks to the extra pixels in the bigger image, the image-processing software can perform noise reduction in the final, lower-resolution image.
All this combines with an effective optical stabilisation system to produce a camera that, in terms of all-round quality, tops every other smartphone camera on the market. In low light, it’s better than even the Galaxy S4 zoom – although that phone’s 10x optical zoom beats the 1020 for far-off subjects.
Thankfully, it’s a pretty good smartphone, too. You get the usual bundle of Nokia apps, including free global satnav with local maps, Nokia Music, the same Smart Cam software we first saw on the Lumia 925, and the Microsoft Office mobile apps. In addition, making phone calls was a pleasure, with crystal-clear audio at both ends.
Browsing the web feels slick and smooth: the 1020 recorded a speedy SunSpider score of 896ms – around the same as the 920. However gaming power is limited, as a result of 6.1fps in the GFXBench T-Rex HD test suggests.
Battery life is its weakest area, with 50% remaining after our usual day-long test. Indeed, if you’re planning a long day of photography, the battery in the 1020’s camera grip makes it an essential accessory.
However, it’s all about the camera with the Nokia Lumia 1020, and on this front, it’s a huge success; combined with decent smartphone capabilities, it’s an alluring proposition. It’s expensive, but it’s also the most desirable Windows Phone 8 handset yet.
Verdict
A superb camera and a competent smartphone make the Nokia Lumia 1020 the best Windows Phone 8 handset yet. Read the review.
Performance
Features & Design
Value for Money
Overall
Specs
$820 AUD
(pricing info)
Copyright © PC Pro, Dennis Publishing
Copyright © PC Authority, nextmedia
Tags:
1020 hardware lumia nokia review
By Jonathan Bray
Jan 8 2014
11:20AM