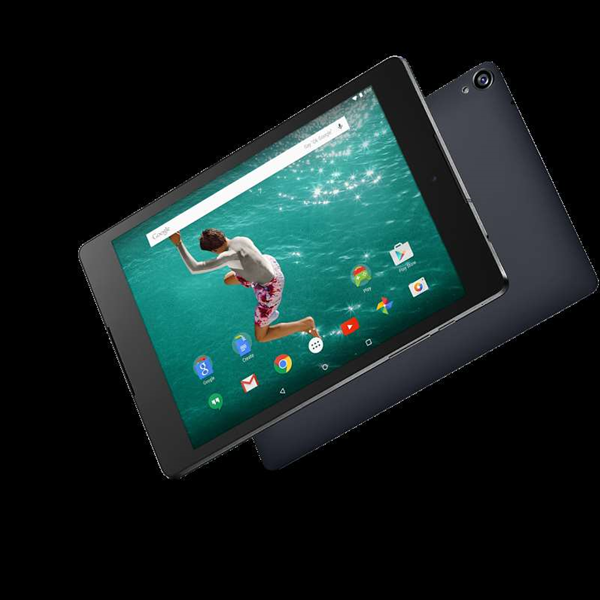 The Nexus 9 is Google’s first big-screen tablet to be released since the Nexus 10 wowed us a couple of years ago. Since then, the internet giant has focused on smartphones and compact tablets, but it’s time for a full-sized comeback.

So, how good is this HTC-manufactured tablet? Can it sock it to the iPad Air 2, or is it just another Android also-ran?

Design
First impressions aren’t particularly positive. Pull the Nexus 9 from its box and the first thing you might wonder is where all your hard-earned money has gone.

The Nexus 9 is ringed with brushed aluminium, which looks smart enough; it’s topped with shatter- and scratch-resistant Gorilla Glass 3; and it has a pleasingly minimalist aesthetic. Sadly, it’s undermined by cheap-feeling plastic on the rear and flimsy build quality.Tap the rear lightly and it gives disconcertingly; twist the tablet and the whole thing creaks and groans; pull at a corner of the panel and it starts to come away from its mooring, even though the rear isn’t designed to be user-removable.

If you choose the lunar white or sand versions, be prepared to get the cleaning cloth out frequently, too: the Nexus 9 picks up grime like nobody’s business. Alternatively, choose the indigo black version to mask that.

In terms of physical design, the Nexus 9 can’t hold a candle to the iPad Air 2 nor, for that matter, the Samsung Galaxy Tab S 8.4, the Amazon Kindle Fire HDX 8.9in or our current favourite Android tablet, the Sony Xperia Z2 Tablet, all of which are more solid-feeling and attractive.

The only positives are that it’s comparatively light – in fact, at 425g, it weighs a fraction less than the equivalent iPad Air 2 – and that its smaller dimensions (it measures 154 x 7.95 x 228mm) mean it’s possible for people with large hands to grasp it in one mitt.

To add to the Nexus 9’s woes, there aren’t many options for would-be purchasers. You can buy a 32GB Wi-Fi version for $589 and a 32GB 4G version for $719, but that’s your lot. Anyone who wants more storage is stuck, particularly since there’s no microSD slot for expansion.

Display
The Nexus 9’s screen makes a promising first impression. Turn the tablet on and you’re greeted by a bright, vibrant, crystal-clear image. It measures 9in across the diagonal, so it’s a touch smaller than the iPad Air 2’s display, but, with an identical resolution – 1,536 x 2,048 – it narrowly outdoes it for pixel density, at 284ppi.We also like the 4:3 aspect ratio that this resolution delivers.

Normally, the screens on Android tablets are 16:9 or 16:10 affairs, which feel a little awkward to use in portrait mode. Here, we found ourselves naturally using the device upright, which gives you plenty of room to read most websites at their full width without having to zoom in.

The numbers look good in our technical tests, too. At maximum brightness, the IPS screen outmatches the iPad Air 2, reaching 456cd/m2 on a full white screen (compared with 401cd/m2), and contrast is a fine 1,092:1. Colour accuracy is very good, with an average Delta E of 1.53 and a maximum of 3.52, and the display is capable of displaying 94.9% of the sRGB colour gamut.

However, there’s one annoying problem: around all edges of the display is a gentle white glow from backlight leakage. This is particularly noticeable – and distracting – during movie playback, when the light is obvious against the black bars above and below your film.

Performance
In terms of performance, there’s not much to complain about. Under the hood is a dual-core Nvidia Tegra K1 chip running at 2.3GHz and an Nvidia Kepler DX1 GPU, accompanied by 2GB of RAM. This combination performed brilliantly in the benchmarks, coming a very close second to the iPad Air 2 in the more demanding tests we ran.

This may be a blip, however: in general use, we never felt wanting for speed. The Nexus 9 feels every bit as responsive as the iPad Air 2, and nothing we were able to throw at it caused it to so much as break a sweat. Clearly, the Tegra K1 is a highly capable processor.

Battery life
Android 5 (Lollipop) introduces new battery efficiencies under the moniker Project Volta. These are aimed at making the OS more power-efficient, especially in standby. For example, Android will no longer wake up a device to carry out a network task when there’s no network connection active; it can group unimportant app tasks together and run them all at once, instead of waking up the device on demand; and there’s now the ability to delay housekeeping jobs until your tablet or phone is then connected to the mains.

This all bodes well for general stamina, and in our tests the Nexus 9 performed with aplomb. The first time we ran our battery test we made the mistake of not putting it into flight mode, but despite syncing data in the background over Wi-Fi for the first eight hours of the test, it still outperformed the iPad Air 2, lasting 13hrs 46mins in our looping 720p video test. This result also compares well with leading Android tablets: the Xperia Z2 Tablet lasted 14hrs 38mins and the Kindle Fire HDX 8.9in endured 16hrs 55mins.

When we ran the test a second time, with flight mode enabled for the duration, the Nexus 9 lasted an impressive 14hrs 59mins – on a par with the Xperia Z2 Tablet, but still not quite as good as the Kindle Fire HDX 8.9in.

Play games on it and, as with most devices, you’ll see battery life plummet rapidly. However battery drain is much more pronounced on the Nexus 9 than on its key rival. In the GFXBench battery test, a projected runtime of 3hrs 25mins suggests that anyone engaging in intensive gaming will need to run to the mains slightly more frequently than owners of the iPad Air 2, which posted a projected runtime of 3hrs 52mins in this test.
While this doesn’t sound like a huge difference, we also observed the Nexus 9 limiting the frame rate to conserve battery power: it averaged 34fps during the GFXBench battery test, which is significantly slower than the best the Tegra K1 is capable of.

Cameras, connectivity and speakers
Camera quality isn’t critical with a tablet, but with the iPad Air 2 upping the ante it’s only fair to compare the two. In terms of raw specifications, the Nexus is on par, featuring an 8-megapixel, f/2.4 aperture rear-facing camera and a 1.6-megapixel front-facing one, and it pulls ahead thanks to the addition of a single-LED flash.

Quality is fine for casual snaps, but we found the Nexus 9 tended to blow out highlights badly, and the automatic white balance frequently went wrong; under strip lights in the office, everything took on a bluish tinge. In addition, autofocus was terribly slow, particularly in low light – it hunted backwards and forwards for ages before locking on. This isn’t a device you’ll want to take with you to shoot snaps of your kids in the school play, and it isn’t a patch on the iPad Air 2 in this regard.

The Nexus 9 has the iPad beaten – just – on connectivity, with NFC on board, in addition to 802.11ac Wi-Fi and Bluetooth 4.1 with A2DP and aptX audio support. Audio quality is superb, too: thanks to HTC’s BoomSound front-facing stereo speakers, the Nexus 9 pumps out audio with unusual strength and clarity. Volume levels are high – enough to watch TV programmes and movies comfortably without reaching for the headphones – and there’s even a degree of body and bass. The iPad Air 2 is good, too – but not this good.

Verdict
Overall, it’s difficult to know what to make of the Nexus 9. On the one hand, it has a number of serious flaws, with poor build quality chief among them. Then there’s the high battery depletion rate under load, backlight leakage around the edges of the screen, the absence of a microSD port for expansion and a lack of high-capacity models, all of which dent this tablet’s overall appeal.

On the other hand, it’s the fastest Android tablet we’ve tested, and battery life for light tasks such as watching video is superb. It has a bright, sharp display in a practical, usable 4:3 aspect ratio and great speakers, plus it’s light and reasonably slim, too.

In addition, the price for the base model undercuts the iPad Air 2 by a definitive margin – $140. It’s also cheaper than our favourite large-screened Android tablet, the Xperia Z2 Tablet.

If you’re tempted by the idea of a big-screen, pure Android device, therefore, the Nexus 9 may be your best option.