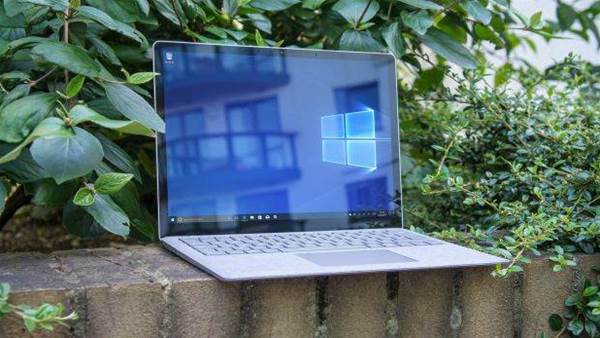 What's the deal with Windows 10 S? And how good is Microsoft's first traditional laptop? Our review will answer your questions.

As Microsoft’s first genuine rival to Apple's MacBooks, the Surface Laptop has a lot riding on it. Not only is the company’s second notebook looking to take on Apple's recently-refreshed laptops, it’s also tasked with launching the new version of the company’s operating system, Windows 10 S.

With so much on the line, will the Surface Laptop be able to deliver the goods, or is Microsoft’s first proper ultraportable notebook going to be DOA?

Microsoft has re-asserted its design chops in recent years, and the company’s first-party Surface devices are reliably gorgeous and well-built. Unsurprisingly, the Surface Laptop is no exception to this – in fact, it’s among the best-looking Windows laptops we’ve ever seen.

Appropriately enough, it looks like a cross between the Surface Pro and Surface Book, with a clamshell design and a keyboard that’s eerily reminiscent of the Surface Pro’s TypeCover keyboard. It sports an elegant matte magnesium finish, with a gently tapered chassis. At 3mm, the lid is slightly thicker than you might expect, but that’s understandable considering the display is touchscreen.

It also sits neatly in between the Book and the Pro in terms of its dimensions, with a weight of 1.2kg and a thickness of just 14.5mm. Admittedly, that’s more than 300g heavier than the 12in MacBook, but it does buy you a touchscreen – something that the MacBook doesn’t benefit from.

Another minor (but noteworthy) point is that the Surface Laptop has a beautiful hinge action, opening smoothly and effortlessly. This may seem like a trivial point, but you would be surprised how many notebooks get this wrong, requiring a little bit of effort to actually prise apart.

It is totally gorgeous though. If you’re looking for something that’s going to make the Apple crowd eat their words about the MacBook’s superior design values, this might finally be the machine to do it: the Surface Laptop is an absolute beauty to behold.

The Surface Laptop’s keyboard is functionally identical to the new TypeCover released alongside the latest Surface Pro – it’s even got the same water-resistant, soft-touch Alcantara coating. This is excellent news, as the new TypeCover follows one of last year’s best keyboards. 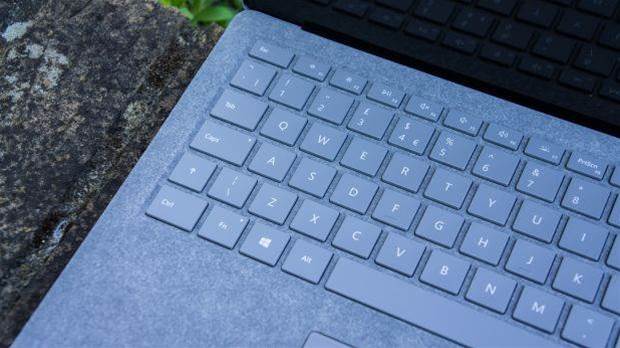 The TypeCover that Microsoft included with the Surface Pro 4 was one of the best laptop keyboards we’ve ever seen and happily, Microsoft has changed very little since the last generation - the new keyboard is all but identical to the old TypeCover, save for a tiny increase in travel distance and a minor change to the key-switch design, both of which are welcome changes.

As a result, the Surface Laptop’s keyboard and trackpad are outstanding, with crisp, satisfying feedback and smooth response. It’s the best we’ve ever on a Windows laptop, and only narrowly beaten by the MacBook Pro.

The Surface Laptop features the same PixelSense touchscreen technology Microsoft uses in all its first-party devices. Oddly, however, the 13.5in screen uses a slightly unusual resolution. Rather than picking a standard resolution such as QHD, the Surface Laptop’s screen has a resolution of 2256 x 1504 pixels.

It’s also got an unusual 3:2 aspect ratio, which means that video content in the common 16:9 format will be banded by black bars at the top and bottom. On the other hand, the extra depth allows you to see more of the page when web browsing and using a business application such as Word.

Aside from that, it’s a truly excellent display – the brightness isn’t as blazing as it could be and lighter colours have a slight tendency to be washed out, but colour accuracy is superb, the contrast ratio is excellent and images are crisp and packed with detail. It’s certainly going to do justice to any movies you’d care to throw at it, and it’s more than capable of handling photo editing tasks.

Next: performance, features and conclusions

Microsoft is charging unabashedly premium prices for the Surface Laptop, and as such you’d expect premium performance. It should be very handy indeed – in theory. It’s packing Intel’s seventh-generation (Kaby Lake) processors – with both Core i5 and Core i7 variants available – and a fairly generous allocation of RAM, which should provide plenty of horsepower.

Sure enough, the Core i5 model with 8GB of RAM managed a highly creditable score of 49 in our benchmark tests, which is up there with some of the fastest Core i5 notebooks we've tested, and even creeping into Core i7 territory. The Surface Laptop should be more than powerful enough to see you through all but the most demanding multi-tasking or rendering operations.

Battery life is always a crucial concern for ultrabooks, and the Surface Laptop acquits itself capably here, racking up a score of 10 hours 42 minutes in our battery benchmarks. This is on par with other business-grade notebooks like the HP Elitebook X360 and the Toshiba Portege X20W, so we have no complaints at all.

It also uses Microsoft’s Surface Connect charging standard, ensuring that it’s compatible with the power adapters of virtually all of the company’s previous devices.

Now we come to the part that’s made the Surface Laptop such a controversial machine – Windows 10 S. According to Microsoft, Windows 10 S is designed for security and performance, but the headline feature is that it only permits the installation of Windows Store apps.

For many, this is likely to be a worrying prospect – and with good reason. The Windows Store, it must be said, does not exactly have a shining pedigree, and has come under frequent criticism for the selection and quality of available apps.

However, the fact that Windows 10 S only runs Windows Store apps may not be the deal-breaker it initially appears to be. Microsoft is making a concerted effort to improve its storefront, announcing a number of new features at its Build 2017 event to make it easier for developers to get their apps onto it. In theory, this means that we should start to see an improvement in the Windows Store in the future.

Aside from this though, there’s also the fact that the vast majority of apps also have web-based versions that can be run in Microsoft’s Edge browser. Workflow tools, document suites and even enterprise software like CRM and ERP packages can all be run as web apps, meaning that many business users won’t even need to install any apps aside from the default software included with Windows 10 S.

It’s also worth bearing in mind that 10 S is still a variant of Windows 10 Pro – which means that you’ll still have access to a sizable chunk of Microsoft’s enterprise features. This includes access to Windows 10’s mobile device management features, Bitlocker encryption, Windows Update for Business and Windows Store for Business, as well as Azure AD domain join and enterprise state roaming with Azure AD.

On the other hand, there are some things – like running Adobe Photoshop – that Windows 10 S just won’t do. Thankfully, Microsoft is, until 31 December 2017, giving anyone who buys a Surface Laptop the option to upgrade to Windows 10 Pro for free. Which begs the question: what, exactly, is the point?

Of course, Windows 10 S is absolutely fine for running web apps, but then so can significantly cheaper Chromebooks.

Unfortunately, ports are an area in which the Surface Laptop seriously falls down. Like the Surface Pro, it’s only got one full-size USB 3.0 port and one Mini DisplayPort – but USB-C is nowhere to be found.

It’s a frustrating omission; not only is USB-C an excellent enabler of flexible and agile working models, it’s also critical for future-proofing your device, as more and more manufacturers move to using USB-C as their primary form of connection. 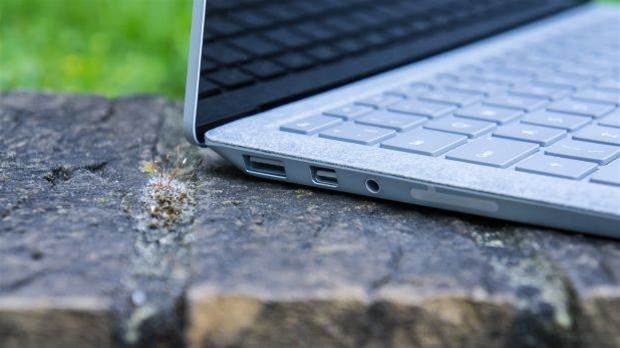 It’s a real shame, and the Surface Laptop definitely suffers for not having USB-C, particularly in comparison with other, cheaper ultrabooks which do feature it. Of course, Microsoft will be offering a dock with USB-C support, which connects via the Surface Laptop’s power adaptor – but that’s an additional cost on top of an already rather pricey device.

Elsewhere, there’s other features commonly found in Microsoft’s premium devices. It includes support for Windows Hello’s facial recognition, the Surface Pen and even the Surface Dial - although you can’t use it on the screen in the same way as with the Surface Studio.

With its pricing, Microsoft seems to be aiming squarely at Apple. The Surface Laptop’s entry-level model offers a latest-generation Core i5 chip, 4GB of RAM and 128GB solid state drive for $1,499 – the same as the entry-level MacBook Air with its slower processor.

The next Surface Laptop up includes the same processor with 256GB SSD and 8GB RAM for $1,999, which is $100 and $200 cheaper than roughly equivalent 12in MacBook and 13in MacBook Pro laptops, respectively.

The top-of-the-range Surface Laptop offers a Core i7, 16GB of RAM and 512GB SSD for $3,299 – the same price as an equivalent MacBook Pro, although the latter has a better screen and USB Type-C ports.

Microsoft has made some slightly baffling decisions with the Surface Laptop. Debuting Windows 10 S – an operating system that would be most at home on a low-budget Chromebook rival – on what is otherwise a top-notch ultrabook is an odd choice, as is spurning the incredible versatility of the USB-C standard.

Get past these hiccups, however, and you’ll find that the Surface Laptop is a truly excellent device. It’s not blowing you away with any new, fancy features, but what it is doing is delivering one of the most solid, well put-together notebook experiences you can get, with an absolutely superb keyboard, gorgeous design values and speedy performance.

And while you certainly couldn’t say the Surface Laptop is a bargain, it is quite competitively priced compared to Apple and big-brand Windows laptops.