MacBook Pro 13in review: even slimmer and more powerful 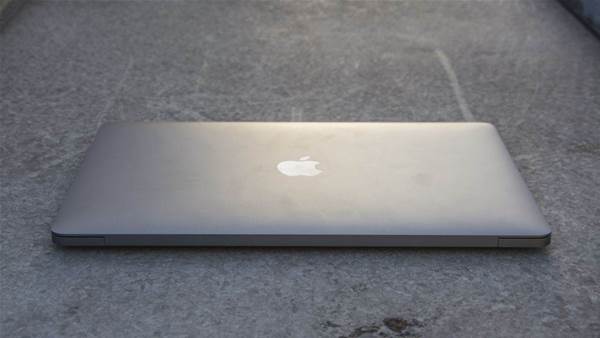 Apple gives the 2017 version of its performance laptop a speed boost, but there is a trade-off.

Apple has finally updated its business-grade MacBook Pro laptops to include Intel’s latest, seventh-generation (Kaby Lake) Core processors. The 2016 MacBook Pro was already one of the most impressive laptops of last year, and the addition of an extra performance boost promises to be the icing on the cake. But there is one trade-off – reduced battery life.

Overall, however, the new MacBook Pro 13in is still one of the best laptops money can buy. Here's why.

The screen is absolutely gorgeous. Display technology has always been one of Apple’s strengths, and the MacBook Pro definitely does not disappoint. The contrast and brightness are both absolutely superb, as are its colour accuracy and depth. Text and images appear pin-sharp thanks to the retina display and its 2560 x 1600-pixel resolution.

Apple has also moved to the wider DCI P3 colour gamut, meaning that colours are much richer and fuller. Frankly, you're unlikely to see many more impressive notebook screens, and it's sure to be a delight for photo and image editing.

The MacBook Pro's keyboard is a particular highlight. The keys have hardly any travel depth, which we weren't keen on initially. However, after using the new Pro for a while, we started to really like them. The actuation force needed to register each key-press is feather light, meaning you barely need to brush the keys in order to type.

We found ourselves typing much more softly than we usually did on our mechanical keyboard (much to the delight of our co-workers!). If you're someone that really likes to hammer away at the keys when you get into full flow, you may want to invest in an external keyboard, lest you wear your fingers down to the bone. 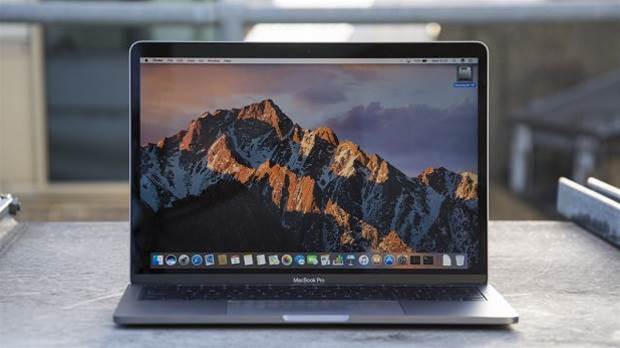 The trackpad is still excellent, offering heaps of room – meaning you can reach any area of the screen with ease, rather than having to constantly reposition your finger. The feedback from clicks still isn't quite as pronounced as other trackpads, but that's a pretty minor complaint.

It's super precise too, so creative tasks like photo editing are easy to carry out without needing an external mouse. Multi-touch gestures are also easier now – if you're a Mac user that hasn't yet started taking advantage of them, now would be the perfect time to do so.

As with last year's MacBook Pro, Apple has decided to jettison most of the Pro's ports. The full-size USB A ports are gone, as are the Thunderbolt 2 ports, SD card reader and HDMI port. Instead, everything has been replaced by Thunderbolt 3 slots, which will handle everything from data transfer to connecting peripherals (there's still a headphone jack, though).

The cheaper configurations only have two ports, and they’re also used for power, so plugging your laptop into the mains means that you'll be left with just a single usable port. The more expensive, Touch Bar-enabled models up this allocation to four, but you'll be paying a premium for them.

This may prove a pain for a large chunk of MacBook users. If you're using it as a desktop replacement, it means you may need to rethink your workstation setup, as monitors, keyboards and other peripherals likely won't connect directly to Thunderbolt 3 ports. Your best option is to invest in a dock, which adds extra expense onto an already pricey device.

On the upside, having a dock can streamline your workspace – you can get your whole setup connected in one stroke (connect your monitor, keyboard, mouse and any other peripherals to the dock, which then connects to your MacBook with one cable), making it easier to flit between mobile and desk-based working.

That's something you're going to want to be doing a lot, too – this is Apple's thinnest, lightest MacBook Pro yet, and it's never been easier to sling it in a bag when you're heading out the office. In fact, it's the same weight as the equivalent MacBook Air and as thin as the Air's thickest point, although it doesn't taper to a fine edge. In terms of mobility, it's definitely Apple's best laptop thus far for working on the go. 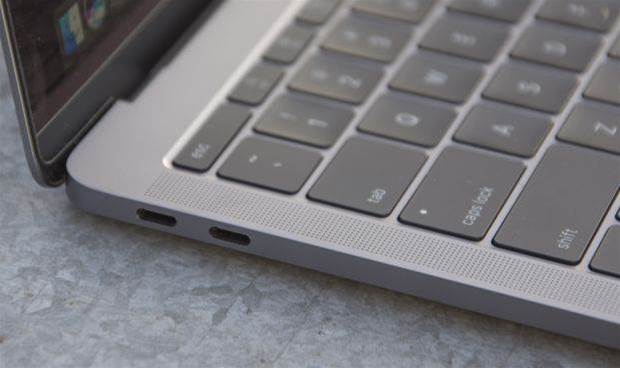 While it may seem like an odd point to mention, the MacBook Pro's hinge is really nice. The movement is smooth, with noticeably less force needed to adjust it than older models. It shouldn't make that much difference, but it's a small touch that gives it a satisfyingly premium feel.

Apple has now updated its MacBook Pro range to feature seventh-generation Intel Core processors, which means improved performance over the previous generation. The 13in model comes with a dual-core Core i5 processor, with a base clock speed of 2.3GHz for the entry-level non-Touch Bar version and a 3.1GHz dual-core Core i5 for the higher-end version with Apple’s Touch Bar.

Performance-wise, the new MacBook Pro has had a significant bump over its sixth-generation-powered predecessor. We tested the 3.1GHz Core i5-7267U model, and according to our benchmarks, it’s around 10% faster than the equivalent previous version. However, when we ran it through the Geekbench tests, it was more than twice as fast as the 2016 MacBooks at single-core operations, and around a third faster for multi-core tasks. It’s roughly on par with the Core i5 version of Microsoft’s latest (equivalent) Surface Pro, pulling slightly ahead in terms of multi-tasking.

The 2016 MacBook Pro's already-excellent storage speeds have also been improved on, with an upgrade to both read and write performance. The 2017 MacBook Pro's read speed has had a small speed boost of around 5%, bringing it up to about 2.1GB/sec, but write speeds have had a massive 69% uptick, pushing them to a blazing 3GB/sec. We managed to transfer 8.5GB of files in mere seconds.

These speeds are blazing, to say the least, and outstrip the competition by a country mile. If you've ever been bothered by long load times, the new MacBook Pro should make those frustrations a thing of the past.

We wouldn’t expect the newest crop of MacBook Pros to struggle with anything but the most demanding of tasks, and our review unit did not disappoint. Even when running the latest version of Adobe Photoshop, LibreOffice, Spotify and three Chrome windows with more than 10 tabs each, the MacBook Pro didn't break a sweat, and you're unlikely to see slowdown unless you start seriously pushing it to the max with intensive rendering tasks.

Unfortunately, one area where the latest MacBook Pro has slipped slightly is in terms of its battery life. The 7 hours 30 minutes score it racked up in our benchmark tests isn't exactly shameful, but it's more than two hours less than last year's model, and probably less than a full workday for many people. 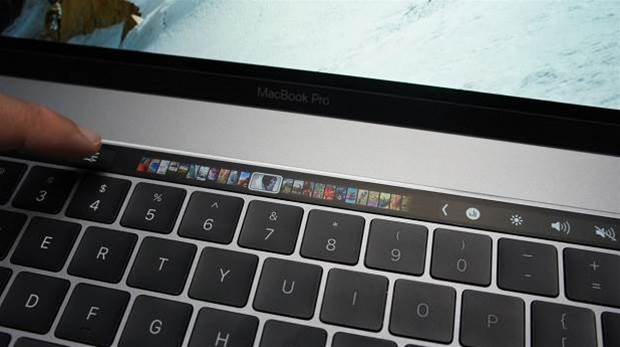 This is the price that you pay for the improved performance, but it's an irritating compromise. On the other hand, Thunderbolt 3 charging means that it's compatible with a huge range of third-party power supplies, so juicing back up shouldn't be a problem.

Much like with its iPhone range, Apple has gradually stripped laptop design down to its elemental form. The latest MacBook Pro has jettisoned everything that doesn't absolutely need to be there and, with the notable exception of the Touch Bar, hasn't added anything new.

Instead, all the essential components and functions have been polished to a mirror shine. Once you’re used to it, the keyboard is truly excellent, the trackpad is superb, and a processor upgrade means that performance is sterling on even the base model.

The loss of ports compared to prior generations may anger quite a few people, who may see it as a step backwards in terms of versatility, while the drop in battery life is also a step backwards.

Doubling the RAM to 16GB adds $320 to any model, while a processor upgrade typically costs $480. Apple also offers SSD upgrades, starting at $300, with options for up to 1TB.

Apple’s redesigned MacBook Pro was one of the best laptops of last year, and a beefed-up processor ensures that it can still keep pace with any other ultrabook on the market. It has taken a step back in battery life – and you will need to be prepared to pay a premium and live without the without the traditional complement of ports – but if you've got the cash, you won’t find a better laptop.