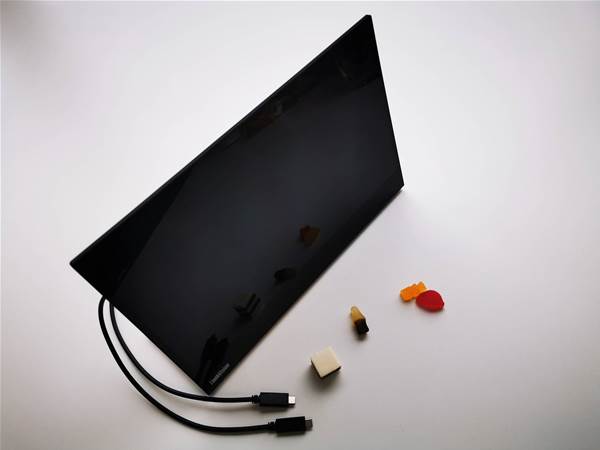 Lenovo’s ThinkVision M14t monitor is a thin, glossy, touch-screen panel that plugs into your computer via USB-C and provides a second display. There are no drivers required and it rotates to portrait or landscape automatically. The Full HD resolution is crisp and colourful on the 14-inch screen though the glossy coating can act like a mirror in the wrong lighting conditions. It’s also a fingerprint magnet.

There’s a 90-deree flip stand on the base which allows you to prop it up in a variety of ways and the hinge is robust enough to prevent wobbling. There’s a USB-C port on either side to make it simple to position to the side you need. On the right there’s a power button and security lock socket while on the right are a menu button and brightness rocker switch. The menu allows you to switch between colour modes without using Windows – these amount to making warming the display colour or filtering blue light.

It’s a 10-point touch-screen device and comes with a 4,096-pressure level active pen to enable tablet like interactivity. It will take a bit of fiddling with Windows settings to transform a computer into a Windows tablet, but it’s not impossible.

Another benefit is that you can plug it into a phone. Our Huawei P30 Pro used the M14t as a full-blown Android tablet desktop display while transforming the phone’s screen into a mousepad. For those who don’t want to carry a laptop around, this could be a great alternative.

Ultimately, this is an ultraportable monitor (it weighs only 698g and is 5mm thick) that fits in a small bag and doesn’t require a power socket. While we haven’t yet found a killer use for it yet, it’s the first of its kind that we’ve seen and is a genuinely impressive, very-simple-to-use device. At $599 it’s not unaffordable and will hopefully fix a problem that we didn’t know existed for those requiring an extra monitor.